The Flame In The Cauldron 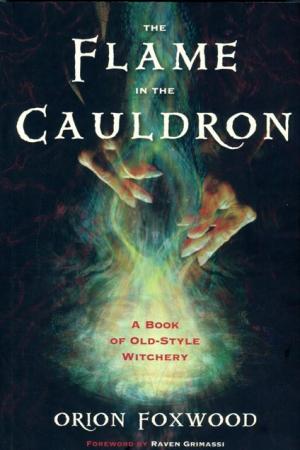 A new and short book on traditional Witchcraft, written by someone who practices traditional Witchcraft and carries his experiences and some of the best techniques along with personal advice on the subject. The author is authentic and his views are personal, yet based on the teachings he has received. He was trained by a couple from Essex. I Maryland he was trained by a witch of Wales, a witch from the Fox Clan, a priestess of the Ravenwood Church and Seminary of the Old Religion in Atlanta. He was trained by lady Circe of Toledo, Oho who was a hereditary witch and from his grandmother who was also a hereditary witch.  He was also initiated in Alexandrian Wicca.

The writer starts with a brave statement about witch-blood, meaning a natural urge of the practitioners of Witchcraft and Magick to practice their art no matter the obstacles they appear in their mundane lives. People who have that natural talent will search and find their teacher who is going to awaken this ability and push them in the world of the Craft. The witch power is used for a safe, happy and healthy life. There is a description of what is happening to the individual when he has awakened his witch-blood and it is “boiling”. I find very accurate the examples he gives. He continues describing the feelings of meeting other witches and noticing that “you are not crazy” and how this process leads to find a magickal current and be a part of it.

He provides information about old witchcraft, what it is, how it can be taught, why it is not a hobby and why the witch-blood cannot be ignored. He also categorizes the practices of witchcraft. This is a good beginning for anyone who has not an idea of what traditional witchcraft is.

He states that there is important to have a teacher, who is going to awaken the witch-blood through his actions and he can also ignite it through ritual work. The author believes in group rituals and stressed the fact that they can affect greatly the individual who wants to practice this art. This is certainly true, but it is not the only way. Later on the book, he writes the basic beliefs of traditional Witchcraft, including teachings on the Goddess and the God, time periods and places where the veil of the two worlds is thin etc.

The most important part of the book is the three visualization techniques he describes and only for them, the reader should buy this book, especially the beginners in witchcraft. The first techniques are called “entering the mill” and it is a self-empowerment technique. The second is the use of the “witch-flame” where it is used a candle to empower the aura of the witch and he can send to the candle flame any bad habit to destroy it or any good thing he wants to attract. The third technique he describes is the catch of the serpent. It is a technique used to charge talismans. I think that all three techniques are valuable for devotees of Hekate, because they use the serpent as a symbol and because they are old techniques that the writer shares with his readers.

At the end of the book, there is practical advice on different aspects of witchcraft.

On the negatives, the book is a little "dry", the paper is not good and it should be more practical including rituals. It is only good for learning the three techniques and reading his valid advice on traditional witchcraft.