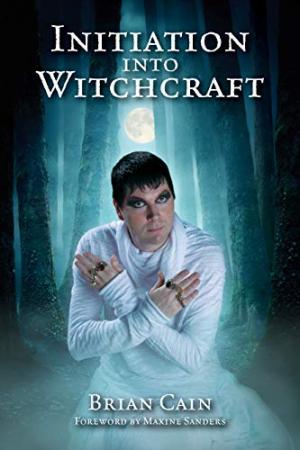 Initiation Into Witchcraft is a book that should have been written a long time ago. It's a new book of 2019 published by the author's publishing house, so it is free from censorship. It is written by a high priest of Alexandrian Wicca and its purpose is to introduce the reader to the world of British Traditional Wicca (BTW). The introduction is written by the legendary Maxine Sanders. The author is practicing Witchcraft from an early age and he holds strong opinions on Wicca/Witchcraft, going against the New Age current and those writers and publishers who promote consistently either a watered version of Witchcraft or the satanic version, the so-called Traditional Witchcraft. These books, with authors stating the truth, are missing in our times, like The Heart of Wicca of Elen Cannon Reed, and we need more of these voices to educate the newcomers to paganism, ancient religions, Ceremonial Magick, and Witchcraft.

The book is suitable for beginners, although it is dense of information and it should be read 2-3 times to grasp the ideas and the teachings of Mr. Cain. The prism of the book is Gardnerian and Alexandrian Witchcraft, but it is documented with the research of other authors, of magical and archaeological interest. He links modern Witchcraft with ancient practices and theological beliefs. The writer has done a good job presenting the subjects he wants and he supports most of them, in a way that doesn't make the reading boring. On the contrary, the book flows fast and you want to keep reading until the next chapter. For the intermediate practitioner, this book is invigorating and will inspire him with new roads and ideas.

The subject of initiation into Witchcraft is something clear for Mr. Cain. He doesn't accept the self-initiation idea or any initiation outside an initiatory tradition. This is expected from his prism. He shows that initiation is serious work for him and the first thing we read in the book is that initiation is compared with a college degree. That's Laurie Cabot's opinion and the reader should have that in mind because that is the prism from BTW.

Moving to the structure of the book, it is very well organized, it answers questions that every beginner has, it gives a broad view of Witchcraft from ancient cultures till today's BTW, it contains information about covens, ancient cults, ancient Gods and Goddesses relative to Wicca's theology, basic information on tools and in the end there is a small grimoire to cover the curiosity of a beginner and give ideas to the practitioners of Wicca. In the end, there is a good section of suggested bibliography on Witchcraft, Occultism, and Ceremonial Magick and books written by initiates of BTW. Let's see what is written in each chapter.

Presents the roots of modern Witchcraft in the cave of Trois-Frères in Ariège of France at 19.000 b.C.Witchcraft was a religion of fertility and survival, thus the female and male gods. When Christianity arose the old religions were considered satanic cults. This changed in the 19th century with the rise of secret societies and for Witchcraft, with the acts of Gerald Gardner and his students who popularized his opinion. He gives great advice on how a new reader would approach a coven of BTW and what they should do before.

It's a chapter about covens. What it means, how many the members can be and why, how to join a coven, what to look, what to expect, what is an outer court, what a leader expects from a new student. More terminology on covens is presented like coven elder, coven maiden, summoner... When a coven usually meets, what is the non-socializing rule and other rules. It explores the types of covens, their purpose, etc.

A historical chapter on Celts, Romans, Saxons, and Egyptians, the main nations that lived or influenced the BTW.

Here is examined the importance of lineage and how different lineages in Wicca were created. It is well-written research on the spreading of Wicca through the initial covens and we also see some rules and rivalries.

Brian Cain presents the traditional view on initiation and as we expect he disagrees with self-initiation. He also examines the initiation from Druids, Greeks, and Egyptians. Even though may someone disagree with his opinions, we can understand Brian's viewpoint. The next important thing is the examination of ancient cults, which had initiation rituals like the cult of Dionysus, Diana (Artemis), Isis. Then we move to modern secret societies and Witchcraft from Gardner to Sanders. The conclusion is that Witchcraft is a priesthood and as such, it needs a succession through initiatory rituals, like any regular religion of our modern era.

Exploring the theology of Wicca's Goddess and God, through the examination of ancient Goddesses and Gods. Mr. Cain supports that the God and the Goddess of Wicca aren't one of the ancients that we know, but a more general form of ancients and it holds a different secret name for each tradition. He respects traditions and so, he doesn't reveal more than needed.

Although we are used to reading weird things about Hekate, this is not the case for this book. In two and a half pages we see some of the main qualities of Hekate, the exploration of horses, dogs, and lions as her symbols. I a not sure why he chose the lion, but anyway... and there is a slight mention of her role in the Chaldean Oracles. It's a simple presentation, for those who know nothing about the Goddess.

On the Horned One, he starts with an exploration through historical periods and he reaches 19th's century Eliphas Levi's Baphomet and Murray's Witches' God. He moves with his characteristics as a Sun God. Then we see the exploration of Amun-Serapis, Pan, Dionysos, Cernunnos and the devil. He makes some mistakes in the book, like believing in the Indoeuropean theory, or like here in Dionysos that he replaced Hestia, which isn't true, that diavolos (greek for devil) comes from latin deus, not true as deus comes grom Greek Dias (Zeus), but the book is fairly good. The part on the devil, thus Satan, is written because he wants to make things clear and dissolve some misconceptions. Here he clears the myth of "traditional witchcraft" of modern eclectics, who draw their beliefs on witch trial records and blend them with their own. I am happy that someone had the courage to clarify that because I have noticed a turn of publishing houses in the opposite direction. It is also weird to me that one of the writers who praise this book, in the beginning, is also supporting these myths, although not in public.

Introduction and basic information on magical weapons in Wicca, with some documentation in their uses in antiquity.

We have a small grimoire with basic knowledge on psychic powers, hermetic principles, visualization, the three-fold law, the Wiccan rede, spells with historical value, small daily rituals, two rituals with moon sigils, excepts to add to your Sabbat rituals and tables of correspondences (planetary days and hours, tarot's triumphs).