Genius Of The Tarot 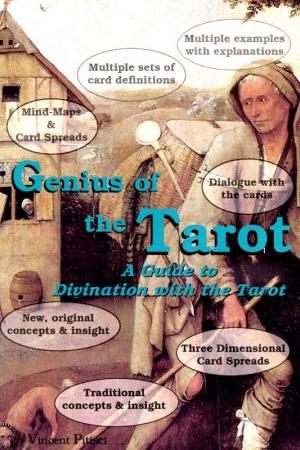 Vincent Pitisci is a Tarot cartomancer who lives in Chicago. He reads Tarot since 1969 and professionally since 1992. The Genius Of The Tarot is his first book and the most basic one regarding card meanings. The way I see it, it is a book that has to be read with The Essential Tarot, as they both are the same work from another angle. His books carry his personal style, sense of humor and you think that he is actually teaching you. I have read three of them and they were being read quickly.

In this book, you will find the first 183 pages with card meanings using the RWS Tarot deck. Half of them are pictures of the cards. So, the left page is a picture of the arcanum and the right picture consists of 5 small paragraphs. The description of the card, the traditional meaning, a shift of that meaning, a larger shift of that meaning, and some questions for the reader. The meanings he uses are the absolute essentials. This makes the book beginner's no1 choice, but the progressive shifting of the meanings shows a way to develop further a better understanding of the card meanings if the reader insists on that. On the minor arcana, we see what we expect to see, his own numerological system in action.

The next chapter is the most interesting one. Pitisci doesn't care if other writers avoid writing about the application of the cards, he believes that this is the important part. So, half of the book is full of examples. He writes 3 3-card spreads, 3 4 winds spreads (a rare spread) and 3 celtic cross spreads (his variation). He also explains his variation of the celtic cross, which is interesting for cartomancers of traditional methods like the TdM. Every example is based on his system and book learning the card meanings, not the pictorial intuitive analysis. We read what we expect to read. His readings are also positive and yet, he gives a negative reading too, by combining the cards. The examples are well organized and illustrated and easy to follow. Personally, I don't disagree with his meanings or card combinations and every good cartomancer who wants to read the spreads of another cartomancer will find his examples useful and interesting. At least I did. Vincent doesn't use reversal cards and he tends to see things positively. I disagree with these viewpoints, but we are cool.

In the 6th chapter, he connects the card spreads with mind-maps, this psychological field that he likes to read about, and he justifies that they are the same thing. In chapter 7 he does a question to the Hermit card and he gives three answers. This is a great example of intuitive pictorial reading and I believe he should write more examples like this because beginners do not grow their cartomantic abilities easily and they can be helped by such examples of his quirky card meanings. The book ends with 5 conversations with the cards: the Devil, the Empress, Justice, Death, the High Priestess. Another downside of the book is the non-existent lower margin. In some pages, the text goes down to the end of the paper.