Ancients Wouldn’t Had Blocked you

As an active member in the community of the Goddess Hekate, I participate in conversations providing evidence, experiences and my opinion whenever I see that I can help. Sometimes, I see some odd opinions online and in my attempt to understand how those were formed, I start a discussion by making questions. I am sure that you have an experience where you ask a question and the other side thinks you are rude, arrogant, disrespectful, fool, troll that you misbehave etc. A famous author wrote once an imaginary dialogue: Someone is accusing him that he eats babies and he kills cats. Suddenly he finds that profile and asks a question: “how do you know that”. Then the profile responds: “Oh, look he is attacking me again.” Total mess huh? A sad state to be honest.

Let’s say that when we ask a question, we do just that. Platforms like social media do not offer a real communication like a face to face in a coffee place, in a house, while walking. You just write and assume the inner world of emotions of the other person. Many times, when I ask a question, the other side isn’t responding to the question. In ancient Hellas this would be unacceptable as there is no dialogue if there are not clear responses and questions. Having read most of Plato’s works from young age (last year in lyceum-first year in the agricultural university)I saw Socrates all the time asking many questions to generals, priests, his students, rhetors, politicians, sophists and no one complained about an attack, a lack of respect and other things we read nowadays online. I see it as weird to see many complaints in an online discussion. Or people not willing to answer. Moreover, Socrates used the maieutic method to extract knowledge from the participants and he always proved that their initial statement was wrong. He also used irony to mock his opponents who told him that he was wrong. Socrates instead of being angry, declared them wiser than him and then he started the questions. You can imagine what followed...

Those things were normal for ancient Hellenes and I believe that people who are devotees of Hekate in one stage or another of their lives, should have read ancient texts. Some of them should be platonic dialogues for three reasons. They are the only single texts we have from an ancient Hellene writer without gaps. All the footnotes and cross-references we see on the available ancient texts, from Plato, have been found in the books we have. Secondly, they are perfect reads. Thirdly, Plato is the one who wrote on the Cosmic Soul, a teaching that we see later developed by the middle platonic and the neoplatonic current, until it was incorporated as a view of the Goddess Hekate.

The latest dialogue I read, was Parmenides or On Ideas. It is not an easy dialogue, so I suggest to buy a book with a fairly good introduction to the dialogue or read another book/study for this dialogue before reading the text. Parmenides also shows the mental level of people who lived in ancient Hellas at the 5th century b.C. One argument of people who don’t read ancient texts, history and mythology books is that we, today, know better than those people, so we don’t have to read them or rely on them. Or we know as much as they knew. I also read in the Patheos blog, that according to that side, those books are covered with dust, the Gods are dead, they change their mythology etc. I have written an interesting article The Illusive Goddess, which it was written without having those incidents in mind. Today, if we see this dialogue and we try to remember one case of our lives that we participated in a dialogue like this, so complicated, long, sophisticated, full of logic puzzles, traps, questions and answers, hypothesis etc. we aren't going to find anything. I don’t think we are ever going to remember or even imagine one similar case. 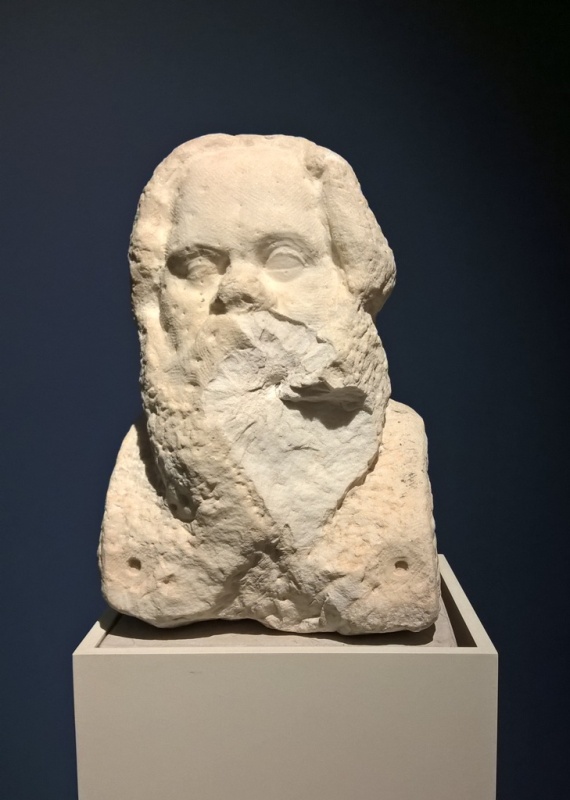 Taking this dialogue as an example, I want to present some points were Parmenides is reacting to the thesis of Socrates and this was not considered to be rude. Socrates didn’t leave the conversation, didn’t block him, didn’t make a report or filled up a complaint form, neither one of the participants hit another on the battle between the theory of Ideas and the theory of One. We are talking about theories who characterized each school, not just a theory about a detail, or a theory about a part of life.

A dialogue should have the moments of tension and free movements of the face and also spontaneous expressions. We cannot agree to everything, but we can see if our opinions can handle examination through various questions. Parmenides was introduced to the theory of Ideas, which was a new threat to his theory on the One. Though that the techniques of the eleatic school were used against its theories on the One, Plato who did that job in the dialogue, used elements of this school to form his world of Ideas. Plato didn’t burn the books of Parmenides or Zenon. He read them, he examined them and he formed theories. Devotees of Hekate who tend to consider disagreements as counterproductive or annoying should try to understand that this is how philosophy works and science is a part of philosophy. There is one case of a devotee who blocked me because he didn’t like my opinions, though they are based on ancient texts. Well, Aristotle read all the presocratic philosophers and wrote reviews on their work. He didn’t agree with many, but he explained his thesis. He didn’t choose not to see what they had to offer, to say. In the dialogue of Parmenides, though Socrates is very young and Zenon is 40 Parmenides is 65 years old, Socrates cannot express what he thinks (as we see at other dialogues) as his opponents. He even gets a critique in his new theory of Ideas from Parmenides at the first part of the dialogue. And though that he is pressed and he presses back -and with hesitation- in another dialogue we see that Socrates acknowledged that Parmenides was a wise philosopher. That’s the beauty. No attachments.

In the beginning of the dialogue when Socrates expresses why Zenon’s conclusions aren’t right, Parmenides and Zenon look each other and they make face gestures and they were smiling (130b) and when Socrates ended, Parmenides praised him for his impulse. But Socrates wasn’t offended or felt any irony, because he truly was very brave and fast in the discussion. When Socrates firstly responds to Zenon, Zenon responds back that he is a dog bitch from Laconia who follows people’s sentences to research for mistakes. Socrates had said that the book of Zenon had the purpose to deceit people as according to Socrates he said the same things with his teacher Parmenides, using another way of expressing them. Zenon corrects that by saying that he was taking it a little further (128 c-d). Parmenides says to Socrates that he is young and he hasn’t conceived philosophy yet due to his age and he seeks for the opinion of humans(130 e) and later in the dialogue he encourages Socrates to stay in the philosophy from his young age. Those things happen in the beginning and the dialogue continues normally without emotionalism. Socrates participates in the dialogue without any restrictions of politeness, with no expression of politeness etc. And remember Socrates is 20 and Parmenides 65.

In the last work of Plato, Laws, we see another scene. Approaching the last books, we see the wise young Athenian talking with two elder people, one from Crete and one from Sparta. The discussion takes place in Crete, as the three men walk from Knossos to the mountain Ide, the mountain of Zeus. The Athenian starts to prove the existense of gods. Because the other two are not used in complex syllogisms he states "now that we start this discussion it will be powerful and maybe beyong your powers. So, I don't want to go to your heads or cause you dizziness with my many sentences, as you have not get used to responses and by that way you will be shamed in a possition not appropriate and not pleasant, I think that I should follow this method..." (893 a) And Kleinias, the one elder instead of insulting him or stop talking with the Athenian or remind him that the stranger is in his ground etc. he responds: "You thought it very well oh, stranger. Do as you say."

People who consider online disagreements and arguments as something that shouldn’t be happening in a community or a group or an article, should travel back in ancient Hellas, at the place where all human virtues were expressed and founded. Where philosophy was born, not by one school, but with different schools, with students of the one, attending lessons of the other and participate in debates. In fact, the platonic currents were encouraging debates in the classroom. It is legendary how Aristotle didn’t let Plato make his lecture with his questions, that one day when Aristotle was sick, Plato noticed that when he entered the classroom and he said: “well today we will have quietness”. Later, in the neoplatonic current we read how Plotinus encouraged people to come to his classroom and debate with him. That’s healthy. No emotions, just logic to reach the world of the thinkable things. If ancients would engage the dialogue in the search of the truth, then why doesn't everyone engages? Or considers an argument of the other side as an attack on his personality? Do we or do we not want to learn the truth?

Image: Unfinished bust of Socrates from the Archaeological Museum of Athens. Roman Period