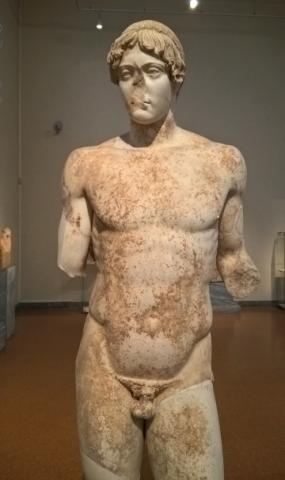 I have read and heard many times that gods can be scary showing up with terrifying, monstrous appearance ready to rip your heart out of your chest and threaten you to death if you do or say something wrong. This approach of a god as a monster which spreads fear does not seem any divine and honestly a god does not care to kill you - for many reasons. Neoplatonically speaking he has many other things to consider instead of wanting to “destroy” a part of his extension. All these earthly matters that are going on among people are too far away from him and he also has others under his dominance to take care of them, but this is a discussion of a different subject not examined at this article. Returning back to our ugly, fearful and monstrous god, in antiquity it was common for the poets to attribute to the gods actions and passions of the humans but the tragedies, comedies and poems did not reflect their true belief and view in perfect accordance with the religious and philosophical system, but they tended to overact in their descriptions for making it easier to understand and teach some things through a way for entertainment. That is the reason why Plato strongly disagreed with the Oddysey of Homer because gods were saying lies, something impossible for the real religious system. Studying the Hellenic philosophy and the religious belief systems of the antiquity it is made immediately clear that the gods don't have any passions as the humans do or any monstrous appearance. For this article, we have to think of some facts, put them to order and then use our logic to end up to safe conclusions. We will keep it practical and simple.

Before starting our analysis we should define the system upon we will work to avoid any misunderstanding. We will base our examination on some teachings of Plotinos in a very simple form. On the top of the divine hierarchy, we have the One, the Ultimate God. Under him we can find the Nous (mind), moving downwards we have the soul and the matter. We will keep it simple and without any further categories in between. However, we will put the gods between the wider field of matter and mind.

Starting from the beginning, the Creator himself must be either beautiful or ugly. If he is ugly why should he create something opposite from him? He must create something ugly as well because it is this all that he will know. If the Creator is beautiful according to the previous thinking he should create something beautiful and not something ugly. In both cases, he will create something similar to himself, either beautiful or ugly. Keep that thought in your mind for later. Moving on, the nature and the whole world is a divine creation and all of the people some time in their lives saw the beauty of the clear night sky or the moon or the sunset or the sea or the forest and for a second they thought that all this creation is divinely beautiful – and I know no one who would disagree with that. We will use for our examination the beauty of the nature for that reason.

However, it is not only that beauty we can perceive with our material eyes. We can skip the material beauty and seek for inner beauty in other things. There is beauty in learning a subject and in knowledge itself. There is beauty in the virtues and no person is happier than the one that sees another person with cultivated virtues. And virtues are divine as Plato says.

Returning back to our diagram of matter, soul, mind (and one) they are all connected with each other under a law of wholeness so that the one level emanates from the other. Between the mind and the matter are put the gods. Putting the gods in the wider field of nous (mind) we see that hierarchically they are above the material world which means that in order for the material world to exist there must be a kind of energy that emanates and flows from the gods down to the matter. This gives the power to the gods to create. The source of the creation is the divine itself and according to this, the nature was created perfectly –as possible as the material nature allows – by the perfect god(s). And the nature accordingly creates by watching what is beautiful and well defined.

In the nature there is a logic principle, an archetype of the beauty of the body. However, the logic principle for the soul is more beautiful than this of the nature because the principle of the soul is the source of the logic principle of nature (Plotinos, V.8). Climbing the hierarchy there is a creator who created the first logic principle for the beauty in the field of soul; and that principle is the nous (νους, mind) so that we climbed the hierarchy seeking for beauty following: nature (matter) – soul – nous (mind) by using for our examination the beauty of the nature that everyone can understand from his own experience. When we see the night sky with the stars and the galactic line and we believe that this is the most beautiful thing we will ever see, we have to think from what kind of enormous beauty this image derives, this image we see with our material eyes. Climb up the hierarchy and try to conceive it.

That beauty of the nature is good by all means and no one would ever say that this beauty is bad. Since we know that beauty is good we can use the matrix of Aristotle which is consisted of couples of principles initially developed by the Pythagoreans and includes the following 10 opposite couples. According to the matrix the good and thus beautiful belongs to the same column with infinite and light (and for this analysis, we will see only two out of ten principles).

On the contrary, the ugly can be found in the opposite column. According to the above, the image of a god can only be beautiful as the beauty that exists here, in the bodies and in nature, hides the archetype which is the cause for the beauty here but originates there, following the hierarchy of matter-soul-mind.

Plato in his Symposium says that the gods’ beauty is inconceivable. Nicely said because we can’t conceive that kind of beauty with our material body; the material body will understand a material beauty and a “mindly” body would conceive the beauty of the gods that are put in the field of mind. Plotinos writes that the beauty of the gods is due to the fact that they have nous (mind) and not that they have a body – and this comes in agreement with our previous statement. As gods have nous it is impossible that the one time they will think and act correctly and the other time wrong because they stand in their purity (Plotinos V.8) and light and there is not any blocking that will ever make them see something wrong, but they know everything and the truth and goodness for them is part of their essence.

When a person comes in touch with the nature which is beautiful because it is created originally by a divine creator, that person then contemplates that beauty until he reaches the memory of the archetype which is the cause for the beauty. The person reaches that memory because the person’s soul is connected with the other divine levels above him. Now the soul which is divine, perceives a hidden image inside it, an image of the god(s) who is perfect and beautiful. With that way the soul through the material eyes of the man contemplates a perfect creation, the nature, and the person sees a part of himself and of the beauty that he himself holds from the creator. He remembers what he had inside him and before the contemplation of the nature it was asleep. And the moment when this beauty fills us and calms us making us feel complete, we silently wish that this moment would stay forever. And what we wish to stay forever, it is always something good and beautiful. And the divine is eternal so that the eternal gods are good and beautiful as well.

Image credit: Apollo in the Arcaeological museum of Athens