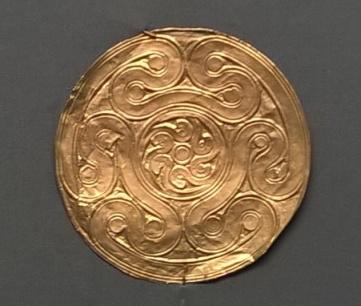 Strophalos or Iynx is an ancient hellenic symbol dated before 2300 b.C. It was connected with the Goddess Hekate and later with Her aspect of Cosmic Soul, sending the Ideas from the Paternal God to the Creator God. Strophalos, triskelion, gammadion-tetraskelion and labyrinth are symbols that look like each other but the uses of strophalos are quite different. Through the help that was provided by the ancient Hellenes writers from Xenophon to Proclus, Damascius and Michael Psellos we will discover the uses, the form and the idea behind the magickal tool of the Witches-Theurgists of Hekate.

This article helped many devotees of Hekate to understand that the modern strophalos, the circular symbol with an inner labyrinth, is not a foreign symbol, but it is traced in the mycenean civilization, thus it is a native hellenic symbol. It can be inscribed in the flying wheel or not, but it still remains an ancient symbol and linked to the Myceneans Hellenes.

The spiral is one of the most ancient magickal symbols. As the civilization evolves the spiral can be a labyrinth. The strophalos is something in between. Many witches today, use the following symbol on their altars, cloths, candles, pouches etc. It is an ancient Hellenic symbol. You can see it today in the National Archaeological Museum of Athens.

And in the Numismatic Museum of Athens you can see the same labyrinth from Knossos of Crete.

Here is a video from youtube of how you can draw this labyrinth using circular motions.

The labyrinth though a symbol from the Μinoan Crete, where the snake Goddess (maybe Hekate) was worshipped is not connected with the Goddess Hekate in any historical way. The prison where the great bull Minotaur was kept had the shape of a labyrinth. The spiral movement of the labyrinth is connected with life forms, thought, destiny and energy. A devotee of Hekate may use the ancient labyrinth for mystic purposes of course.

Strophalos means a whirling wheel. The verb is strophao, meaning to spin, to turn. Strophalos is something that is circular and moves in a circular motion. It is a spinning tool. The strophalos is not a labyrinth. As a two dimensional symbol in a circle we can see a triple form of energy generated in the circle from three different sources. As Hekate is a Triple Goddess with powers in three realms (land, sky, water), the strophalos can be connected with Her symbolically. As a practical magickal tool it is a spinning wheel which is used to invoke the Goddess. In the book of Sorita d'Este and David Rankine, Liminal Rites, we read a Pindarean Ode: "The Queen of sharpest arrows, brought the dappled iynx from Olympus, bound to the four spokes of the indissoluble wheel.". Iynx means something that is yelling or crying out. The verb is iyzo. Iynx is a strophalos and Pindar is reffering to Aphrodite who gave the described iynx to Jason in order to attract energy of love to make Medea fall in love with him. Socrates in the work of Xenophon, Memorabilia is also reffering to the magic wheels. In my article about Theocritus and magick you will read more about Idylls, where also iynx is used as a magickal tool for love spells invoking Goddesses Artemis, and Hekate. At Philostratos we find a description of a palace of the Babylonian king. In the blue roof (symbolism of the sky) figures of the Babylonian Gods were hanged and four golden iynges among them. The Witches of Babylonia used those iynges to attune themselves with the Gods. This is a clear description of iynges being an invocation tool. The same writer also describes that iynges were in the Temple of Apollo at Delphi and had been seen by Apollonius.

The late byzantine scholar Michael Psellos describes a strophalos of Hekate as spinning tool with a golden shere, with sapphire in its centre, a rawhide thong with letters. As the strophalos was spinning in the air, it made a special sound of an animal. Psellos is connecting strophalos with Hekate clearly calling the tool hekatiko, means something that belonges to Hekate. He also adds that the shape maybe triangular too. The Byzantine scholar Nicephorus Gregoras (1300 a.C.) responds to his teacher and logothetes of Constantinople Theodoros Metochites: "about the hekatikon strophalon". Searching the byzantine texts we will find facts that prove the effectiveness of the iynges. Neoplatonic philosophers clarify more the subject and they also give a new dimension. Neoplatonic philosopher Synesius wrote about the sympathy that was created by an iynx. Marinus describes an incident of weather magick using an iynx (Procl. 28). Proclus is writting that the ineffable causes (iynges are called swift by the Oracles. The iynges are also called inofficialy, ferrymen. This word is too magickal and describes perfectly their purpose as mediums that make the astral liquids manifest. It acts as a catalyst in magickal practices, especially invoking the Goddess or for love spells or for attracting specific energies. In Hekate Soteira, written by Sarah Iles Johnston, we read that "iynges are transmitters, assimilative links between the divine and human worlds. Interestingly, their activities are often described in terms of whirling or rushing movement. The effectiveness can also seen in a fragment dubium 223 form the Chaldean Oracles, where Hekate speaks:

"Easily Drawing these unwilling divinities from the aether by means of secret iynges, you lead them earthward."

In fragment 223 she is complaining for the wrong use of iynges. In the fragment 87 we read:

"The modest holy name and unslept strophalos into the cosmoi at the mighty order of the father."

Speaking about Oracles, in the Sibylline Oracles, an unknown collection of oracles from antiquity, written in 12 books, 4200 verses in hellenic hexameter we find in the Oracula Vetera Hekate speaking abou iynx. "The ineligible are drawn by the lynxes from the clear sky easily, at my will to the earth they move according to the motion." We see again the effectiveness of the wheel.

So the strophalos or iynx was a magickal tool of Hekate and Her Witches. Moving from the hellenistic period to the byzantine period, strophalos was used widely as a magickal tool that was linked with the World of Ideas (platonism). This way of thought implies that Hekate as the Cosmic Soul is receiving the ideas from the Paternal Intellect and she sends them to the Creator God. The iynges are linked with those ideas of the Father. (Hekate Soteira, Sarah, Illes Johnston). According to the law of sympathy the whirling of the iynx and its association depends on Hekate. The Witch-Theurgist should use this power wisely. The functionality of the iynx is the invocation of Hekate inside the Witch-Theurgist (fragment 219).

Today many devotees of Hekate believe that the strophalos is a modern symbol. No, it is an ancient hellenic symbol. It is traced in the Mycenean Civilization (1600 b.C.) as it was used for decoration for clothing or jewellery. Hekate lead me to a book called "Fire and Coins, Archaeology and Fire" published by the Numismatic Museum of Athens. The book has archaological images with strophalos as it is used plus some good variations such as the gammadion. All those exhibits were found in Lerna of Argolis in a building which was called by the archaeologists "the house of pottery". The were seals, wooden seals which were used for printing in the clay. The same technique was used in Crete (disc of Phaistos), which is the first printed material in the world. Those seals were used on pottery vases which stored food. They were dated in 2300 b.C. so the symbol is much older.