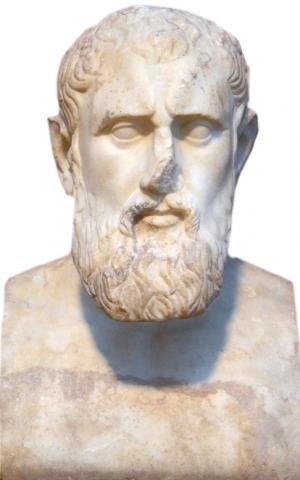 "Stoic Philosophy is like an egg. The outer part, the shell is logic. The white albumen is ethics. The inner crocus is physics." 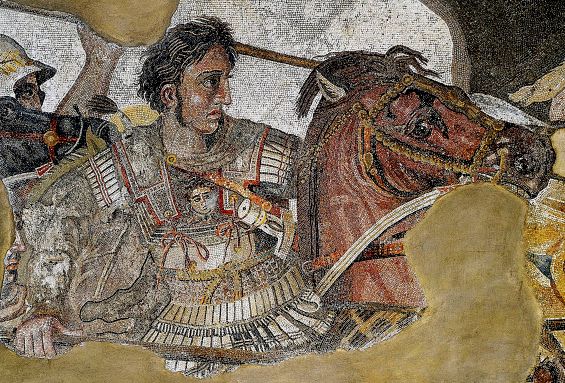 The Hellenistic Era begins with the death of Alexander the Great and ends with the victory of Octavian vs Marcus Antonius in Actium (323 b.C. – 31 b.C.). The period is characterized by the expansion of Hellenism all over the known world. Sudden changes, political movements, a new transportation system, a new public structure, a new language, a new religion were the things that frightened and shook the peace and tranquility of the citizens. Also, new wars were being started, military campaigns, new cites were being built, with a new architecture, new priorities were set etc. The value of the city-state in the expanded world was sinking and the citizens were feeling isolated and helpless. A new religion evolves, which is a mix of Egyptian, Anatolian and Hellenic Gods and Goddesses, theology, practices and temples.

"Hellas expanded is the world." -Victor Hugo
Image taken from Wikipedia with the conquest of Alexander the Great.

Aristotelic and Platonic Philosophy were too difficult for the common citizen who couldn’t follow their teachings or see them applied to daily life. The problems were solved by three main schools of Philosophy: the Stoics, the Epicureans and the Skeptics. These schools spread and developed throughout the Hellenic empire and later to the Roman empire. They were simpler than the teachings at Academia or Lyceum, the teachings could be applied in daily life and they provided solutions, comfort, and serenity in a world which was changing rapidly.

Poseidonios, Chrysippos, Zenon
The image was created from wikipedia's photos

The Stoics came into existence  with Zenon, when Polemon was the Headmaster of Plato’s Academy. Zenon had been a student of Cynism and later of Platonism. He managed to refine the teachings of Cynism and use them as a base, integrating a lot of Platonism with his own ideas to form a new current of thought. He subdivided Philosophy in three categories: logic, physics and ethics, a division he had taken from Xenocrates, who had been a headmaster of the Academy and a mathematician. An oracle had advised Zenon that if he wished to be wise, he should spend time with the dead. Zenon understood that he needed to study old philosophers, something that we observe today as seemingly undesirable by most modern people, pagans and new age priests. 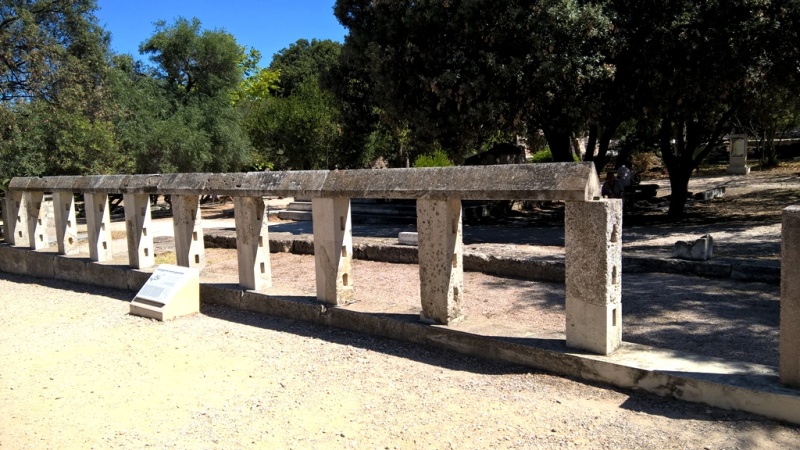 Monument of the famous heroes, part of the Ancient Agora of Athens were Zenon, Kleanthes, Chrysippos spend their time.

Philosophy was a preeqiusite criterion for attainng a happy life, which has nothing to do with accumulating material goods, being rich or presiding over others. The aim was to control yourself, your mind, your desires and your emotions. By minimizing the desires of the body, your soul is cleansed,  and then you can communicate with the divine. The Stoic Epictetus called Philosophy the art of living and Seneca called it the art of acting. Stoics placed great emphasis on applying the teachings and they were in the habit of mocking the more theoretical philosophers.

Stoic Philosophy is divided into three stages. The earlier Stoa with Zenon, Kleanthes and Chryssipos, who established the foundation. The middle Stoa with Panaetius and Poseidonius, the scientists. And finally the later Stoa with Epictetus, Seneca, Marcus Aurelius, Cicero, and many others. Different views were acceptable within each of the three stages, but the basic foundation would remain the same for all three, in other words, Zenon was the source of their teachings.

Let’s have a look at Xenocrate’s division of Philosophy. Logic refers to gnosis (knowledge) and grammar. Logic was divided into dialectics (knowledge and proper use of the voice) and rhetoric (use of the appropriate expression to persuade the audience). Dialectics was also subdivided into semainon and semanomenon. The first one referring to the proper use of the communication with other people and the second referring to how we take an impression, and through different stages of evolvement, we form a science. In rhetoric, the use of emotion in the voice is perfectly normal and the Stoics used that art (the rhetoric) based on logic. Poetry is also a part of rhetoric likewise music.

Physics is the knowledge of the physical and metaphysical world. The knowledge of animals, plants, spirits and gods. What was the Physics of the Stoics is nowadays separated into science and theology. The Stoic wisemen studied and worshipped nature as God’s perfect creation. The one God is Zeus, who permeates all things. Stoics believe that nature consists not only of matter, but that there is another ingredient, energy, the famous active energetic principle of Stoicism, and Stoics see matter and energy as interconnected. The energetic principle is in fact God who gives form to matter. The view of God is another part of Physics. Stoics see three principles of the world.

God has created the world in His image. (Seems very Christian?) He is the ultimately perfect, good, happy and logical being. (Oh, too Christian?) According to Chryssipos, from the earlier Stoa, Eimarmene is the logic of the world, something that we have to accept if we choose to study and follow the teachings the later Stoa. Stoics attribute the forces of nature to the gods, as they call the One God polyonymos (=with many names). They consider the various parts of his logic as different gods and goddesses and they encourage humans to attempt to be like the gods and goddesses. There is no differentiation between monotheism, henotheism and polytheism, it is only important that you apply the principles of  Philosophy, and show respect to the gods and religion. (Read on piety)The teachings of the Stoics on the soul were also a part of physical Philosophy but as they are difficult to easily understand we will leave them for the future, likewise their opinions on divination.

The third part of their Philosophy is ethics. They supported that with ethics, human can live in accordance with his inner daemon, (see the influences on neoplatonism) which is a part of God. As they saw nature God’s perfect creature, they set rules in accordance with nature. They had a very positive theory, like Plato, that we have good part inside of us and that outer influences makes us lose this communication.

A perfect logical being, can only reflect nature. The role of Philosopher’s model usually played Socrates or Diogenes or Zenon. The purpose of Philosophy is to achieve blissfulness. But this can be accomplished if you know the agathon/good and if you make the right choices. Agathon is the ethical good. Besides actions, the motives should also be ethical. Also, there are no excuses concerning any type of difficult situation. There is no excuse for taking the wrong decision. Another characteristic that has to be practiced is apathy, not feeling the wrong measure of emotions, good or bad from passions, either good passions or bad passions. Stoic Philosopher Hekaton divided four main passions:

How the Stoic wise achieves apathy? He filters everything and he doesn’t let anything make him feel the results of passions. For example the Stoics were teaching that the political power is nothing to the power you have to yourself. You can be someone else’s slave, but only when you allow the results of slavery to pass through you. The human state of emotions should be stable in an earthquake or at a time of glory. Any kind of passion is not leading to agathon or any virtues. Emotions like anger, worry or terror are not welcomed in his inner world. They had exercises for apathy which were practiced in and out of the school. They also used exercises to restrain bodily desires. For example, they slept on the floor or they drank water for a day, eating nothing and saying about this practice to no one. (Reminds you Jesus form the Bible?) They put themselves on a constant diet for better control of the body by the mind.

Stoics considered a duty to be good friends, to fulfill their duties to their country, to make a family, to work and be efficient in what they do. The Stoic Kleanthes was working in the night and in the morning he was studying in the school. Nobody knew how he did it. The Athenians even sued him to found out how he did it.

The last thing of ethics we are going to examine is the virtues. In any ancient system, living with the virtues leads to happiness. And the platonic ones influenced later systems. In Stoicism there are four primal virtues: bravery, justice, fronisis (apply wisdom) and sofrosyne (self-control). The six secondary are: large-heartedness, temperance, science, fortitude, acumen and good will. As we saw, apathy played a great role in the system. The Stoics recognized three good passions or eupatheies, which should be practiced. They are interconnected. The logical happiness, which is inner happiness, brings creative will and this brings the third good passion, godliness, to choose the right thing to do. The practice of those three good passions restrict their opposites. Happiness has pleasure as its opposite. Creativity has wish. Godliness has fear. Though those teachings require thought within the limits of the Stoic Philosophy, they can be perceived by modern people.

Stoic Philosophy is in the Christianity as well as Neoplatonic and Cynic. Stoicism influenced another current, Neoplatonism, which we (the writers of the blog) consider to be of great importance for the devotees of Hekate. Stoicism left a gap unfulfilled. It had no answers to the mysteries, though the practice of divination was considered normal and legitimate for the Stoics. Neoplatonism came to fill this gap and it further incorporated Aristotelian and Pythagorean and theurgy to its practices.