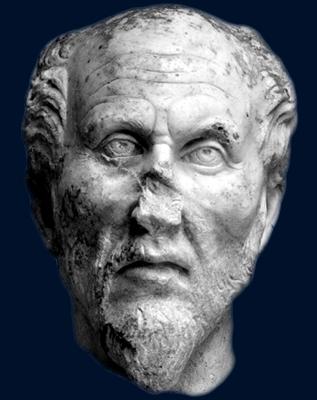 Neoplatonism (νεοπλατωνισμός) is a term which describes the Neoplatonic Philosophy and it is a development of Plato's (Πλάτων) metaphysical teachings and religious system. The neoplatonic current was the main philosophical school of the late antiquity. This philosophical movement begins in the 3rd century A.C. with Plotinos (Πλωτίνος) who was one of the most important representatives of the Hellenic philosophy and the founder of Neoplatonism. The school continues with the most famous philosophers: Plotinus (Πρόκλος) (203-270 A.C.), Porphyrios (Πορφύριος) (234-305 A.C.), Iamblichos (Ιάμβλιχος) (245-325 A.C.), Hierocles (Ιεροκλής) (420-450 A.C.), Proclos (411-485 A.C.), Isidoros (Ισίδωρος) (450-526 A.C.) and Damaskios (Δαμάσκιος) (458-550 A.C.). However the most prominent and well-known representatives are Porphyrios, Iamblichos and Proclos.

Neoplatonism has as starting point and focus of its research, Plato. Plato was considered to be the most respected and wise philosopher, expressing very firmly correct views on the world. His ideas and teachings were led by thinking and writing on the path of logic without going left or right. His work was read several times, again and again and then, the philosophers were writing comments and they were teaching again under a new view. The Neoplatonic current also receives influences from the Stoic philosophers, Aristotle (Ἀριστοτέλης) and Pythagoras (Πυθαγόρας), forming a philosophical system in which theurgy (θεουργία) was gradually incorporated. The Chaldean Oracles and the Hermetic Texts are also included in this philosophical current forming a strong authority.

The Chaldean Oracles, written by Julian the theourgos (theurgist), are a magickal system which was revealed by unknown entities to him and it describes gods, angels, daemones, and unseen forces with instructions of how to use the unseen energy of the universe. Chaldean Oracles were full of platonic, aristotelic, neopythagorean and stoic elements, allowing a perfect fit and merge with the Neoplatonic School until these teachings finally formed a sacred book known as The Chaldean Oracles. A student of Iamblichos, Maximos, taught the emperor Ioulianos the system of theurgy. Additionally, to the already existed philosophic currents which they incorporated and bridged their differences, they also added their own free and broad way of thinking.

The motive for the combination of those different philosophical currents into one was the will for the authentic and genuine philosophy as they considered the philosophy as the inner study of the soul and theurgy as the practical approach of the gods and the divine through methods providing connection with them. The Theurgist is the priest who is executing divine work and his purpose is the divine union (henosis / ένωσις) through the magickal rituals. That divine work cannot be understood if the mind does not pass from the appropriate preparation stages. Philosophy’s purpose is the ultimate truth which is linked to the Divine and Neoplatonism due its view of the Divine was the basis of many systems of magick.

The effect of Neoplatonism, developed during the Byzantine period, influenced both the Western and the Near East cultures not only as a mere philosophical system but also as a religious current with practical application through theurgy that influenced and still influences many magical systems and traditions. The influence of Neoplatonism was so vast that it influenced and formed the today European thought.

Plotinos was not a fan of the external part of religion, but he used defensive rituals. On the other hand, Iamblichos was the ultimate theourgos. This is neoplatonism; a new philosophical school which still lasts, as Platonism and other schools. Neoplatonism reformed the view on religion and philosophy by adding the Magical techniques as a mean to a direct contact with gods and goddesses. Both with the theoretical philosophy and practical theurgy the soul was elevated and expanded in order to unite with the Ultimate One. As the one system lies within the other, both philosophy and magick are combined aiming in the necessary development of high spiritual ideals. They share a common goal of self-discovery through a journey leading to the awareness of the Divine and gaining knowledge of ones immortal self and true origin. It can be made a parallel to the magickal rituals as the act of Divine Union while philosophy is theory, the vehicle of understanding the processes and the preparation upon which is based the magickal act.

According to Neoplatonic teachings, the various stages of the hierarchical order of the universe were inseparably linked together as the one emerged and emanated from the other. The whole universe is characterized by the interaction between the highest and the lowest under a law of wholeness. There is the progress according to which the ultimate One reaches to the world of matter. The opposite of this progress is the return (ἐπιστροφή) according to which the multiplicity from the matter progressively returns to the One.

This article isn't complete yet.