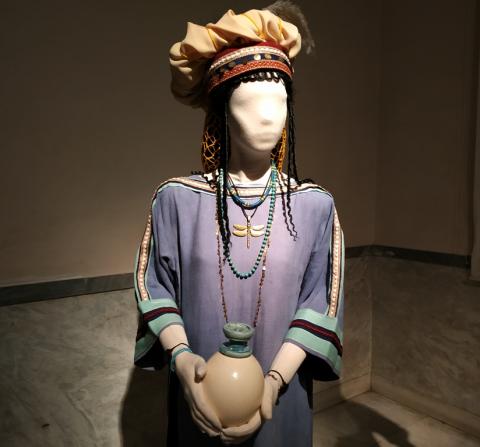 From our world, we can reach the world of Ideas with methexis, which means participation and communication. As there are models from all that exist here, the creation that looks like its initial model has the ability to participate on that model and draw energy.

Methexis is the participation and communication of a lower lever to its higher level. So from the sensible world we have methexis with the mental world. Methexis differs on Plotinus and on Proclus. In both of them, the lower part gains a grade that it lost as it was moved to the direction of matter. It gains one level of its initial state. The upper level participates in its upper level, never to its lower level. Each level has a memory of its initial or previous state, in which it wishes to return. As it exists on a lower level it has some impurities of that level. Purificiation is important for having methexis with a higher or an even more higher level, reaching the En. The En is superempirical, beyond thinking and from its outflow Nous for Plotinus of Enas for Iamblichus, Syrianus and Proclus existed. The important thing is that every entity wants to return on En and this can be also achieved through methexis. This is the divine union, the Plotinic Return to En. That’s why in Neoplatonism, not only philosophy, but theurgy is also used. This means, that the magickian lives as a philosopher, disciplines his body and his mind, purifies his body and his soul to achieve methexis with the Ultimate En, the Ultimate God.

Each level contains divine energy from the En. So if a lower level participates to its higher level, gains a pure form of energy. Plotinus will write (Ennead III, 8) that everything on the universe seeks the view, not only the logical but the non logical beings too.

Proclos writes that “the end of elevation is the participation on the divine fruits and the completion with a self-lit fire, which is the view of the God, since it is placed under the eyes of the Father.” (From the Chaldean Philosophy 192 18-21)

I cannot avoid to mention another teaching, not much relevant with the three virtues, but relatively relevant. The divine philosopher continues revealing that the Father has put symbols on the soul during the first appearance of the essence (192 25-26). Those symbols are projected when we praise with hymns the Father (192 21-23). Those hymns are mental and invisible, which lead to that elevation and carry secret images, harmonious verses and divine powers (192 25-29).

In the Chaldean Oracles we read on the three virtues that originate from the left hip of Hekate. Those are: faith, truth and love (fragm. 46) According to the text, those virtues purify and lead back to the God. So, those are the keys for methexis with the En, the purpose of Neoplatonism. For Proclos, those three virtues unite and complete the lower beings like humans and by completion he implies methexis. Those three virtues elevate us to the upper levels of existence, either by philosophy, by divine love or by theurgy. In the Chaldean Oracles we read that the oracle channels that all things are governed by these three virtues (fragm. 48) The Gods advice the use of theurgy to achieve unification (fragm. 48).

In the next paragraphs we will examine those virtues from Proclos. In the Neoplatonic philosophy, orphism, pythagorism, and Chaldean oracles, thus the initiatory traditions are aligned in the Platonic philosophy. The first two initiatory schools have been incorporated by Plato, the Chaldean Oracles were incorporated from Iamblichos practically, Porphyrios theoretically.

In Platonism, love is the urge of the soul to the nice, beauty and agathon. Thus, the divine. For Proclos, the divine can be conceived as good, wise and agathon (ultimately good). In the Platonic Theology of Proclus (I, 24) we read the same things. Platonic love makes the soul better, fair, wise and spreads her to the divine. Love brings the human mind to philosophy, as this is the only way to know and think of the divine. For Proclos, the soul is potentially agathe (good), getting no influence for the bad of the world. She also has an internal power to elevate her back to the En. This power has the form of love. (Tria Opuscila Mal. Sub 1) This love is about return and progress, goes up and down. This means that the upper level of existence cares about its lower level as the creator cares for its creation.

In the initiatory book Platonic Theology of Proclos we read that “the cause that collects the lower and make them similar,  the cause of completing the offering to that place, is apparent to everyone …and it is mention in Plato and it is nothing more than love, which always connects with good the lower gods with their upper gods and their upper with the upper genres and the perfect souls.” (I, 109  10-16)

For Proclos the truth is linked with the philosopher. So the second virtue is philosophy. And this is expected as the role of philosophy is the understanding of the mental world. In Plato’s Sophist we see that the philosopher “with the power of syllogism is focused in the Idea of Ontos”, which means that the philosopher looks for the mental world and its entities. And he continues “This isn’t easy, because of the brilliance of the space’s light, which prevents it from being visible, as the eyes of the soul of common people cannot see for long time the God”. (254 a-b)

Philosophy is the science of knowing the Ideas, thus participating with the mental world. Provides a mental way of methexis. For Neoplatonists, practical magick, theurgy, was the mean for actually fast connection with the divine. But the soul, should have been prepared with philosophy. Not just theurgy, but art like poetry can elevate the soul and create methexis with the mental world when poetry is used to bring right images on the Gods to the human mind, when it is used in hymns and invocations, when it is used in music to calm the soul and elevate the mental ability etc. Painting can also create methexis when it depicts kallos (the beauty) of the Gods.

Proclos writes that “truth elevates and consolidates the beings” (Platonic Theology I, 109 19-20) And he continues “because through the truth we have completement with the true wisdom, as (the wisdom) illuminates those which act mentally and connects them with the elements of intellect” (109 20-22). He means the world of noetic Gods, which is after the Enades and before the Gods of the world.

"Everything lower goes back in the presence of the Gods. And if the one that metexei (participates) in the Gods is inappropriate, everything foreign from the divine light goes out of the way and everything gets illuminated, constantly, by the Gods.” –Proclus, Stoixeiosis Theologice 143