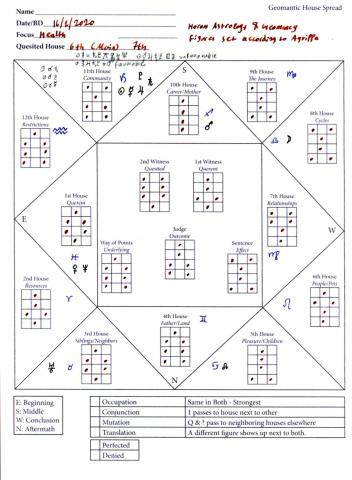 In this article, we are going to see four systems of Astrological Geomancy. Geomancy combined Astrology from the 12th century as we find in the work fo Gerardus Cremonensis, who was Gerard of Cremona or Sabbioneta (to others). He left Italy to move to Spain in order to study Ptolemy's Almagest in Toledo. He also translated 80 books from Arabic to Latin, mainly Astrological books. Till the period of Agrippa (16th century) he was considered the main source of practising astrological geomancy.

Gerard of Cremona created a system that needed no use of the actual positioning of the planets in the sky. The astrological house chart was created by methods of Geomancy. It was the hand that revealed the celestial energies and not the sky. The four mothers are cast as normally, in the sand. Then the first figure shows the zodiac sign we will put in the first house, the Ascendant. The other zodiac signs follow in order. To put the planets he used the casting of geomantic figures. One for each planet following their order: Sun, Moon, Venus, Mercury, Saturn, Jupiter, Mars, North node, South Node. We have the figure for the Sun. He added the dots and divided by 12. Kept the remainder and put the planet on the house that the remainder showed. During the interpretation of the house chart, Gerard didn't use the geomantic figures, only the astrological signs and planets. He also provided a guide for interpretation.

Franz Hartmann also uses the same method and he describes it in his book on Geomancy in 2.5 pages with the example

Henry Cornelius Agrippa came 400 years later to add another system of astrological geomancy. He worked for the emperor Maximilian and his daughter. He was translating various books about ancient philosophy, Hebrew kabbalah and he tried to reconcile those "schools of thought" with Christianity. As he was occupied with magick, he also wrote about Geomancy and he created his own system. Agrippa gives various correspondences in his books. Concerning Geomancy, he casts the shield chart but then he puts the figures in the house chart with a sophisticated astrological method (according to angular, succedent and cadent houses). We find the order of the zodiac signs the same was as we saw in Gerard's. The planetary positions are attributed according to the geomantic figures. No other calculations are needed. This means that if we have the same figure 2 times we will have at least two times the same planet appearing in different zodiac signs! Agrippa used the geomantic figures in his interpretations.

Another system, which is a variation of Agrippa's system was recently created by Priscilla Schwei and Ralph Pestka. It uses the positioning of the figures from Agrippa, the correspondences of Agrippa's Second Book, not Fourth Book. For avoiding the odd positioning of the planets, they use Horary Astrology and for the aspects of the planets, they use Mundane Astrology, which was common at that time. As with other geomantical systems in the past, there are tables for helping the practitioner to interpretation. This system also uses the geomantic figures as a primary source of interpretation and the astrological symbols build the other layers. The shield chart isn't used, as the positioning and the techniques of classical geomancy do not apply with the astrological techniques that are applied.

The last system we are going to see is Golden Dawn's Geomancy as it is taught in the 2nd degree of Zelator, attributed to the tenth sephira, Malkuth (earth, kingdom). The arrangement of the figures in the house chart is completely different from all the previous systems. The zodiac sign and the planetary arrangements are drawn from Agrippa, yet the zodiac correspondences are different from his. As you imagine the problem of having the same planet to more than one signs is considered "normal". The Golden Dawn searches for elemental imbalances, the essential and accidental dignities the basic planetary aspects (opposition, trine, sextile, square) and lastly the power of the planets (exaltation, triplicity, fall and detriment).