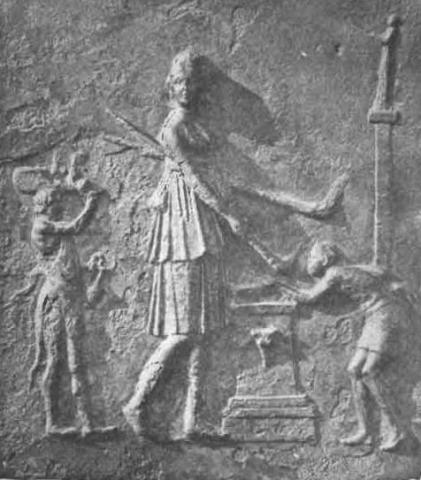 Ippolytos or Hippolytos was an Hellene philosopher from Lyon. He was a student of bishop Eirinaios. He studied ancient philosophy. He also wore the trivonion, the cloth of the philosopher. He became a christian and used his education to speak for christianity to people. He used the power of his knowledge to defend christianity from inside enemies, like sects. He was announced as a bishop from 222 to 235 a.C. when Maximinos from Thrace expelled him to Sardenia. One year later he died out of barbaric treatment.

The orthodox church announced him as saint. He is celebrated in 30th of January. The catholic church honors him in 13th of August.

He wrote many books, one of the most important was Examination Against Every Sect. This book was constituted by ten volumes. In 1701 and 1842 a part of the ten books work was found in Agion Oros of Hellas (the biggest orhtodox christinanic monastery). The following hymn was saved in that book. An unknown writer has wrote it but Ippolytos saved it in his work. One of the characteristics of the hymn is the use of many epithets to address the goddess, which is an orphic characteristic. The ending of the hymn is also heavily influenced by the orphic hymn to Hekate. The language is a common hellenic form, from the Roman Period. It was probably used for offering burned animals to Hekate Chthonia, so it is a part of a ritual. It can be easily used in Hekate's Deipna, at the offering of the Supper.

Nerteria, Chthonia, Urania come Brimo,
Einodia, trioditi, phaesphore, nykterophoite,
enemy of light, friend and companion of night,
you who like the howling of the dogs and the dark red blood,
who walk in cemeteries among the dead,
who desire blood and bring fear to mortals,
Gorgo, Mormo, Mene and polymorphe,
come to meet us, with good will, at our burning offering.

Gorgo = here it means the monster with golden wings, hands of copper, tusks, snakes on the head instead of hair, who is stoning everyone who is seeing it. It is one of the most frightening monsters

Mormo = a monster who drinks blood, eats hearts and brings illness and death . A more common name was Lamia. Lamia had also the ability to change forms as Hekate too. Both Gorgo and Mormo connect Hekate with the dark side of Her personality, as well as the part which address her as an enemy of light, thus the invocation is suitable for the waning phase of the moon to call chthonic and katachthonic aspects of our Goddess.

Mene = means Selene, the moon Goddess, Mene gives the word month, as the ancient Hellenes ruled a month by the circle of the moon