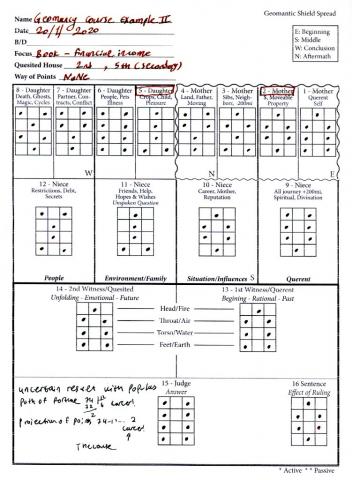 House of the Question

For a financial success, we should definitely see the 2nd house of income, money and resources. The second house is also related to Mercury, who is also the God of knowledge, along with Apollo. If the book is about philosophy and the occult, I would also see the 9th house of the Moon. The 5th house is also related to books, so I will check this house too. If our querent is a writer or he wants to become a writer of various books, then I would check the 10th house.

Since we are talking about one book, I would primary check the 2nd house and then the 5th house.

Interpretation of the Shield Chart

The judge is Populus. According to the traditional teachings, the reading should not proceed and the money should be returned to the questioner. Yet, since it is an educational exercise I will proceed to the reading.

From the quick view, I wouldn’t proceed to the house chart, as the shield chart implies not to expect much from the writing. The judge, the sentence, the house of the quesited and even the 5th house do not show any hints of a good result. It’s an easy reading for the geomancer, yet it is not easy how he will express the result to his client.

In the first house we have Laetitia, which shows that our querent is happy, active (fire) and creative (fire). He is moving upwards to write his book and he is positive. That’s great psychology. Yet, if we see the first triplicity, we understand that he has doubts (carcer and tristitia) and he is afraid to fail. It may also show that he is dedicated (carcer) to write his book and become a good writer in the future (tristitia as rooting earth). At this point, I would ask his intentions about future writing. If he says yes, then I would consider this mentality at the first triplicity.

In the 5th house, which is related with books (according to my notes) we have cauda draconis. If the writer is finishing his book, then it is ok and positive, in all other cases, we have a problem. His plan is going to end.

In the 2nd house of resources we have carcer and that’s confusing. The figure is malefic. The air is closed, he feels trapped and he won’t get money from the book.

Let’s see the witnesses. From laetitia to laetitia and then populus. Fire is still open, yet the other elements aren’t and fire will close eventually. Laetitia is a good figure and it shows progress here. Maybe his book will be published, yet with populus things are unclear. It may show many people buying the book, yet the sentence shows imprisonment and the same figure appears in the 2nd house and in the 10th house. If we see the influences of the second triplicity, there is carcer again. This carcer could be a good figure if we had another judge, but we don’t and carcer in the sentence doesn’t make things easy. I don’t see any good figures that would encourage him to write, like Fortuna Major, Caput Draconis, Albus or Acquisitio. Acquisitio appears in the death house of Saturn and Fortuna Major in the 4th house, again of Saturn of land, buildings, ancient things. It is good to have Fortuna Major in the 4th house as it shows a good result in the future, but the judge, the sentence and the house of resources do not encourage us to give a positive result.

It’s time to find the path of fortune, since we have a question regarding money. Adding the active house dots 74/12 the remainder is 2 the carcer! Again, a negative hint. Calculating the projection of points we get carcer again as the root of the problem. The cosmic influences are not good for proceeding to the writing process to get money. 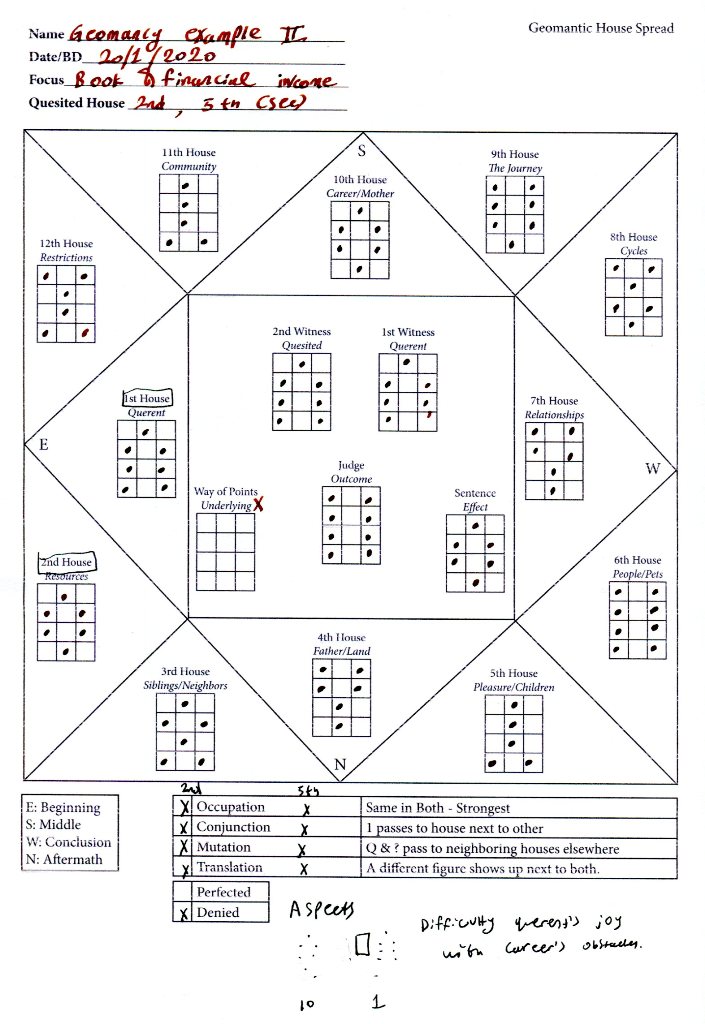 Advising the Fourth Book of Occult Philosophy we see that Mr. Agrippa agrees with us. Carcer in the 2nd house brings cruel poverty.

The house chart is not perfected. If we had a yes/no question the answer would be negative. Concerning the aspects we have a square between laetitia and carcer (10th house) which means difficulty of querent’s joy and career’s, fame’s and authority's obstacles. Things are not good. I could also see the publishers in the 10th house denying to promote the book this time period, which is something that definitely disappoint the querent (from laetitia of the 1sh house to the carcer of the sentence).

I would advise the querent not to proceed for gaining money, but to proceed if this fulfils his needs and personal interests or his sense of duty. The publishing business should see his book when the cosmic influences would be better and he has to work for it. I would also advise him to self promote his name and work before going to a publisher.

This was an exercise I did, for the Geomancy Course of Christopher Warnock. You can see more about his course and other courses in his page Renaissance Astrology.

The blank shield chart and the blank house chart that I use, are created by Kelly Firtzerald. Learn more about her in her website, The Truth in Story or search her channel on youtube.