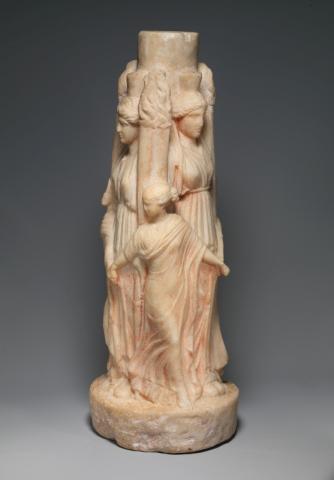 Kallos (κάλλος) is an Hellenic word meaning something of perfect beauty and good in one. “In ancient Hellas ethics is a part of aesthetics. An action is neither good or bad, it is beautifull or ugly… A prudent action is not just ethical, but also beautiful.” (Platon, Abel, Jeanniere, Editions du Seuil 1994)

Charites (Χάριτες) are Goddesses of Olympus who bring essence on anything that is good and beautiful. Life’s good things that make us happy exist on the level we sense them, because of Charites. They accompany Gods and Goddesses to their beautiful actions. Hekate has been connected with Charites, as well as Aphrodite. There are many archaeological exhibits with Hekate and Charites all around the world.

Charites or Graces were Hellenic Goddesses worshipped all around Hellas. Their cult was not only theologically but philosophically and religiously significant. They represent all the happy things in life that last and unite people into a society. They take away mundane worries by bringing fun, gratitude and appreciation in to life fun, gratitude and appreciation. The unseen forces bless the work and the service with their grace using the concept or the presence of Charites.

When someone is gentle, calm, peaceful, honest, feels appreciation and gratitude he or she lives with charis. He acts without the sense of harming another, he is spiritual and good inside. He wants to express those feelings not only by being happy, but also making others happy too on a deeper level.

Charites represent all those emotions and everything around them. In the Cycladic Civilization we see female eidolia(= figurines) placed in graves, which may represent goddesses of fertility and vegetation. They could be Charites. Later, on the Mycenaean Civilization we see Charites engraved with Aphrodite in a gold ring. Both the eidolia and the ring can be seen in the museums of Athens.

Homer writes about one Charis, Aglaia, wife of Hephestos (God of the crafts). In an hymn, he writes about another Charis, Pasithea. Hesiod describes three Charites, daughters of Zeus and Eurynome (Ευρυνόμη). Another variation makes them daughters of Hermes and Hekate. Another presents them as daughters of Helios (Ήλιος, Sun) and Aigle (Αίγλη). And of course there are also other variations - symbolisms. Usually they accompany the Goddess Aphrodite, the Goddess of love and beauty. They weave her clothes and put myrrh on them, that's why they were associated with essential oils and perfumes. In addition to Aphrodite, they accompany other Gods and Goddesses too like Pan, Zeus, Hera, Athena, Apollo, Dionysus, Hermes, Demeter... all Gods in their good, harmonious, helping actions. After all, there is no joy without Charites, even in Olympus.

Those Goddesses were the first to be called in every celebration among Gods and humans. In fact, celebration without them couldn't be anything more than a short parody. The source of their cult is traced in Orchomenos of Boetia. According to Pausanias, Eteocles introduced their cult when his 3 daughters fell in the river. Goddess Gaia transformed those ladies to Charites. But the mythological legend says that three meteor stones had fallen from the sky with their three female figures carved. Charites were also worshipped in Athens, where divine Socrates had made a statue for them. Initially, Charites in Athens were two, Aukso (Αυξώ, the one who increases) and Hegemone (Ηγεμόνη, the ruler), associated with the light. Then they became more. Those were Antheia (Ανθεία, of flowers), Eudaimonia (Ευδαιμονία, of happiness), Eyfrosyne (Ευφροσύνη, of happiness), Paedia (παιδιά, of game), Pandaisia (πανδεσία, of big symposiums) associated with situations of happiness. In Sparta they were associated with the moon, called Kleeta (Κλητά, the called) and Phaenna (Φαέννα, the bright). With other epithets referring to the light they were worshipped in Troizena, Argos, Aegina, Epidauros, Taras, Olympia, Paros, Thasos, Kea... Lydia and in Asia in general. The main names of Charites were Thaleia (Θάλεια, the one who blossoms), Aglaia (Αγλαΐα, the one who shines), Euphrosyne. They are invoked by Pindar by those names. Number three became their official number and they were intially depicted forming a circle looking at the three directions. Later, for an unknown reason, they were depicted naked, with the one looking in the back and the other two in the front. Charites were very young, never close to any "scandal" or "adventure", representing always the bright side of life and divine work.

In the museum of sculpture in Munich, Glyptothek, there is an Hekataion from Attica of 3rd century b.C. with Hekate Trimorfis and the three Charites around her forming a circle. There are other Hekataia like this one. The triple form of the Charites and Hekate’s as well, also The triple forms of both the Charites and Hekate, as well as the values that the Charites symbolize means …”that the liminal forces of creation are accompanied by beauty, grace, and love for the heaven. Hekate as protector of the gates it is connected with Charites as forces of joy and life. In the MET museum of New York we see Hekate with Charites in an excellent Hekataion of the Roman Period, made of marble. In the Museum of Louvre we see a Hekataion with Charites around. It was found in the Mithraeum in Sidon. In the Museum of Venezia we see a triple Hermaic Stele of Hekate with three Charites surrounding Hekate. Hekate wears polos which unites all three heads.  In the entrance of the Acropolis of Athens, Alcamenes’ statue of Hekate Epipyrgidia and Hermes Propylaios were close to the statue of Charites. A sanctuary of them existed also in Agora, close to the Temple of Hephestos.

The Goddess Hekate is evoked in the PGM by voces magicae, in which one word is semne (σεμνή), meaning the humble or modest, but the woman who doesn’t provoke with her actions and her dressing. The woman who doesn’t lose control and who does what she is expected to do. Charites were also semnes, as we don’t find them in any scandal or sex myth or acts of revenge or deceits etc.

For Hekate and Charites many assumptions have been made. Some researchers believe that Charites represent the three phases of the moon and Hekate is the moon. So, they appear together. Indeed from antiquity the moon was related, with its three phases, to the number three. To this thinking of theological arithmetic we read that according to the teachings of Neopythagorean philosopher Nikomachos from Gerasa (60-120 a.C.), the triad is the first with beginning, middle and ending, by which perfection can be completed. “The triad as the model of perfection of everything and as a true number, provided in all things the equality and a part of lack of superiority, as it set boundaries and formed the matter with the powers of all qualities.” Of course we can see on the matter formation, Hekate as the Cosmic Soul and why the Charites are three around the Goddess Hekate.

Note: This article is a synopsis of a bigger article on Charites that it may be published in this website soon. Initially it was intented for the Askei Kataskei magazine