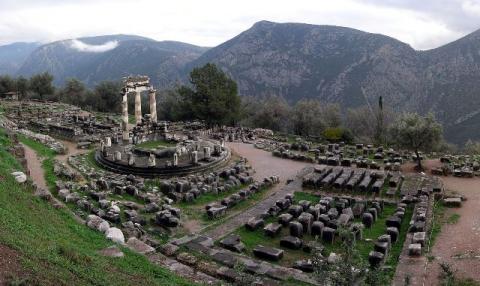 In hellenic the action of divination is manteia and the person is called mantis. The root of the word is from mania, because the diviner cannot totally control himself when he has changed his consciousness and he is channeling messages from other realms.
The Romans were taught divination from Hellenes and they connected the art with the God through the language, that's why they called it divinatio.
Divination is a magickal art. The diviner or mantis forsees the future and the past through:

Hellenes gave more glory to the art of divination than any other ancient tribe. The four most important places of mystery, occult and divination were Delphoi, Dodone, Eleusis, Olympia. Those places were connected with different Gods and from all over Hellas and from barbaric areas, people came and consulted Oracles for personal things, for militay wars, for healing diseases, for political situations etc. Divination was a very effective way to learn the truth. Places with Oracles of Apollo were in Kyanees of Lycia, in Ysiais in Attica, In Larissa of Argos, in Didyma of Miletus, in Isminio of Boetia, in Klaro of Kolophon, in Telmeso of Lycia, in Delos. Oracles of Zeus were in Dodone of Ipeiros, in Olympia, in the Oasis of Lybie... Almost 60 oracles were in ancient Hellas.

According to the Hellenes, divination was a high art, which saves and through this art, the human being can approach the power of the God. In Hellas the diviners were males and females, but females were, in general, more capable in divination.

Travelling to the seas of Odyssey we read for necyomancy, spiritual revelations and shadows. Divination power was considered at that time (before 1500 b.C.) that was a gift from the Nymphs, the main faerie spirits of the mountains, the lakes, the rivers, the plains and the forests.

The things that the diviner reveals are in the same way of the divine plan. Things can change in the future, but the moment the diviner speaks, he connects with the divine to ask and reveal to the human who was asking. So, it was a mean of connection with the God, as well as Witchcraft. That is the reason of a creation of the hellenic word mantomagos, which means diviner and witch. This word was used especially in the chronical period of Byzantium (for one thousand and one hundred years). Another very meaningful word is iatromantiki, which is the method of using divination to find the cure for a specific disease. The cure was usually a herbal remedy-potion.

The stoic school of philosophy gave a clear view of what divination is: A science or perhaps an ability to forsee and explain the signs that are given by the Gods to the humans. The problem here as to the first definition is that physical science and metaphysical were linked. So, Thales of Melitus who knew the total eclipse of the Sun was a diviner for that time, but he used physics and mathematics to reach that conclusion.

At the time of Trojan War, before the Hellenes could sail, they were gathered in Orchomenos and waited for the winds to blow. But the Goddess Artemis controlled the winds and made them weak. The hellenic army asked the famous divinator/mantis Kalchas. He made a sacrifice and explained the result telling that Artemis was very angry due to human acts of the leader who have offended her. So, she was asking the sacrifice of the leader's daughter, Iphigeneia. (Note that Iphigeneia as a name is connected with the Goddess Hekate). During the ceremony, a big snake ate eight eggs as it is written in Iliad. Kalchas told that the Trojan War will last for ten years. He was accurate.

Another example is again from Homer. When the Trojans (also an hellenic tribe) were ready for the war, according to the custom of the Hellenes, the Gods should be asked if the time was appropriate for attack. During battle, diviner Polydamas made an oracle explaining the moves of a bird. The oracle were not good enough and Hector, the leader of Trojans said that the best oionos (sign) is to fight for your own country. Trojans lost the war some years later and Hector was killed by Achilles.

The mother of Achilles, Goddess Thetis, told her son not to go to the Trojan War and fight because he will die in that war. Achilles told her that if he was not fighting for his country he would be a burnen for the earth. He went to the war, he was fighting in the frontline and finally he was killed the last day after ten years of battle.