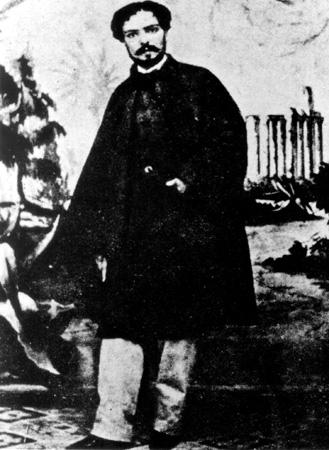 Rhoides was raised in Syros island in Hellas and Genoa in Italy. Then he studied in Syros and later in Berlin. He returned to Athens and stayed permanently, where he wrote many texts, abandoning the career of the merchant, a successful job from carried by his father… Well, he followed his dream and became an exceptional writer. Later in life, his family business was bankrupted and his brother killed himself. Rhoides became poor and he worked as a curator for the National Library.

In Hellas, we still read them and he is taught in school as a great writer of classical literature. Rhoides had humour and a sense of evolution. His main characteristic is his writing style, the way he uses the language to say what he wants. He wrote narrative texts addressing wrong actions and ideas of the Christian church and he did that with humour.

Rhoides has a text about the Witches of the Middle Ages. The Middle Ages was his favourite subject… We have read about the mass hysteria in Gerald Gardner’s book. In the same wavelength, he writes about this sick mentality, infused by the priests of God during a period of darkness in the West. In Hellas, we had the Byzantine Empire, so the side effects weren’t as tragic as we see in western and north Europe, so he is mainly attacking against the things we all know, hunting, tortures, oppression and stupidity...

For Rhoides, the Witch is the mother of science, because when every priest was preaching about poverty and staying with the illness or being patient about your continuous bad luck etc. the Witch stood up and showed her mentality of not giving up, fighting for a better life and exploring nature by working in harmony with the celestial spheres, the winds, the herbs etc. The Witch is the revolutionary, the man and woman who carries the flag or progress and not letting the bad things to influence and beat up someone’s life.

Those are not New Age ideas, but phrases from his text. The Witch refuses to accept that illness is a test from God and says no to Christian readings on health from a bishop or sprinklings with holy water to heal someone. Herbal remedies were far better and effective. Moreover, the Witch didn’t give up to the positive sciences and it didn’t surrender to Christian cosmology over Aristotelian physics. “The doctor, the astronomer, the geometer and the herbalist were the future act of the Witch.”

Rhoides finds very unjust to present the Witch as an ugly woman and he writes that Kirke, for example, was one of the most beautiful women. Also, Pythia and Sybilla were beautiful women who didn’t live in caves or ruined places, but in the temples and in good houses. The witch was never presented as an ugly, old woman in ancient Hellas, and this is another paranoia of Christian writers, even to our modern 21st age. This change was something that the clergy presented and had nothing to do with reality. He also notices that most of the accused people were women, so the females were suppressed socially during the Middle Ages from Christianity and it is not only that, the tortures were horrible. He is making a reference to a trial where a Witch was very beautiful and the judge asks to close his eyes so that he won’t see the satanic beauty. Ironic? Beauty is a gift from God, not from the devil. Rhoides justifies that, by saying that the Gods of the old religion became evil demons from the Christian church and he presents as an example the two stars, Esperos and Eosphoros, the star of the evening and the star of the morning. Christian theology took the ancient names and attributed to demons. For him, the church presents the whole sky as an evil place with that move. This can be a sophisma (a technique used by the sophists) but we can understand that he has a point.

Despite all the Witch-hunting, he mentions that in forests, mountains, rivers and caves, the Witches burned incense and honoured the ancient Gods despite all dangers. Why? Because when a person had a problem and invoked all the saints of Christianity and saw no result on his problem, then he invoked the ancient Gods and used talismans, moon-charged herbs, potions and spells to relief the pain. He used magick and magick worked.

There is an interesting story that he writes and I want to share it. One day, a poor widow woman found her three children to suffer from continuous cough. She loved the two of them, so she took them to the priest. He poured holy donkey pee and blessed them. (Don’t laugh, this was innovative.) They died. She took the only one left out of her house at midnight. She didn’t wear her shoes. Under the light of Hekate (the moon), she took flowers and leaves from a plant that was used to keep the goats away. She used the plant parts to create an infusion and then she added honey. So, she created a basic potion. The child drank the potion and the cough was quiet. The child was able to sleep. This happened the same night. For her bad luck, a deacon (helper of the church) was passing by and saw the ritual. He talked and the woman was accused and died after tortures…

In Rhoides story, Hekate is identified with the moon (very classical in the Hellenic tradition) and the moon has clearly magical energy that is passing in herbs. Another interesting thing is that, the other women learned what happened and used one herb after the other to find out what herb was used by the dead mother. They tried to save their children from asthma too (a common disease back then) and they expanded herbalism. That’s how science worked or magic at that time, which it was basically, the same thing. The herbs that were used to heal diseases were called mayovotana, which means herbs of the Witch. Most of them are poisonous, but they work in the right amount to heal common severe diseases of the Middle Ages.

The above story teaches us a clear link to Hekate with the moon and a link with Witchcraft. The wise craft is also a craft of healing and a method of ancient worship besides its practical aspect. Moreover, we see the energy of kourotrophos (taking care and raising the child), the energy of pharmakeia (use of the herbs), the virtue of justice and how it was violated by the man of the Christian church, the combination of both magickal use of the plant (charging) and the medicinal use of the plant (infusion). We also see the mentality of not giving up, not accepting the sadness to prevail and take things in our own hands.

Another thing that he mentions is that the Byzantine biographies of saints, advising people not to wash their bodies and there is one text that writes not to change the shirt. Though I have read Byzantine History, I haven’t found something similar, on the contrary, I remember that Justinian stopped Hansen's disease. Hellenes would never follow sick ideas like avoiding self-care… Those ill ideas lead to severe diseases that the Witches didn’t have because they didn’t follow idiotic ways of living. What about now? I am not sure…

At the end of his text, he writes: “our aeon (19th century) desires to banish from the face of the earth the things that the Middle Ages were thought as happiness, as tears and hunger… the Witch is the only person that is still hunted after her death by ingratitude. Instead of making her a statue, our modern wise men were born from her ashes and instead of milk they were breastfed by her blood, they stood a filthy caricature over her grave. “We stood against this injustice and we throw a flower over her tearless tomb of this saviour of civilization”. At this point, we have to clarify that if we want to be truly the children of the medieval Witch, we should follow her ways. Study, experiment and keep what is working, just like she did, just like Paracelsus did, with no prejudice to theory or elitism. Witches were the women who gave birth to science in dark western Europe when everyone else was blind of fanatic Christianity created by priests, who we don’t know how the used the New Testament and why with that way… Wicca and modern traditions of magick usually fall to the same stage of Medieval Christianity and their followers don’t see their mistakes on how they act and behave, just like the Christians didn’t do at that time. Whatever system, whatever tradition we follow we should be logical and practical persons with a good sense of humour and the sense of duty of helping others.