The Ensigns of Creation are seven planetary talismans, channeled through Edward Kelley. Initially, they were written in Latin, but afterward, angels instructed Dee to make a new set in the angelical language. The preferred way is to use tin that you will purify. Five of the ensigns are squares and two are circles. Each talisman is connected with a planet, a king, and a prince. They were put around the heptagram of the Sigillum Dei Aemeth starting from Venus, moving to Sun, Mars, Jupiter, Hermes, Saturn, Moon. The Holy Table, the Ensigns of creation, and the SDA prepare the ground for the operations to be holy. Duquette characterizes it as a big magical machine.

I couldn't find tin to buy online, so I used brass, which is a pretty suitable material and connected to Hermes/Mercury. You need one leaf of 30 x 40 cm 3mm (7 euros), three permanent markers one fine, one superfine and one bold or broad (4,5 euros), and scissors to cut the metal. Not any scissors, but scissors for metal sheets. I also used thin sandpaper to smoothen the cut areas. I printed the ensigns of creation on paper to decide their dimensions. For my Holy Table (52 x 52 cm) 6.5 x 6.5 cm worked well. I decided to cut the brass at these dimensions, very carefully (brass cuts and needs power) and slowly.

Then use the marker and draw the symbols in the Enochian language, which is more suitable than using English. It takes time to draw them. I got a headache after making 2 squares. Take your time. Be careful not to use any online ensigns, as I have found mistakes in Enochian to the first group I printed from a website. I preferred to copy the ensigns from Enochian Vision Magick by Lon Milo Duquette.

The next step is to wash them with soap and water. With a sponge and soap, you will make them shinier. Then spray them with a varnish for metals to make sure that the color will remain the same. I passed them 2 layers. Be careful not to inhale the varnish, not to smoke, and not to spray a lot. Also, it would be better if there is no wind to carry away the varnish. You should expect some failure when you use acrylic varnish on permanent markers. Take a look... Minus 3 ensigns. 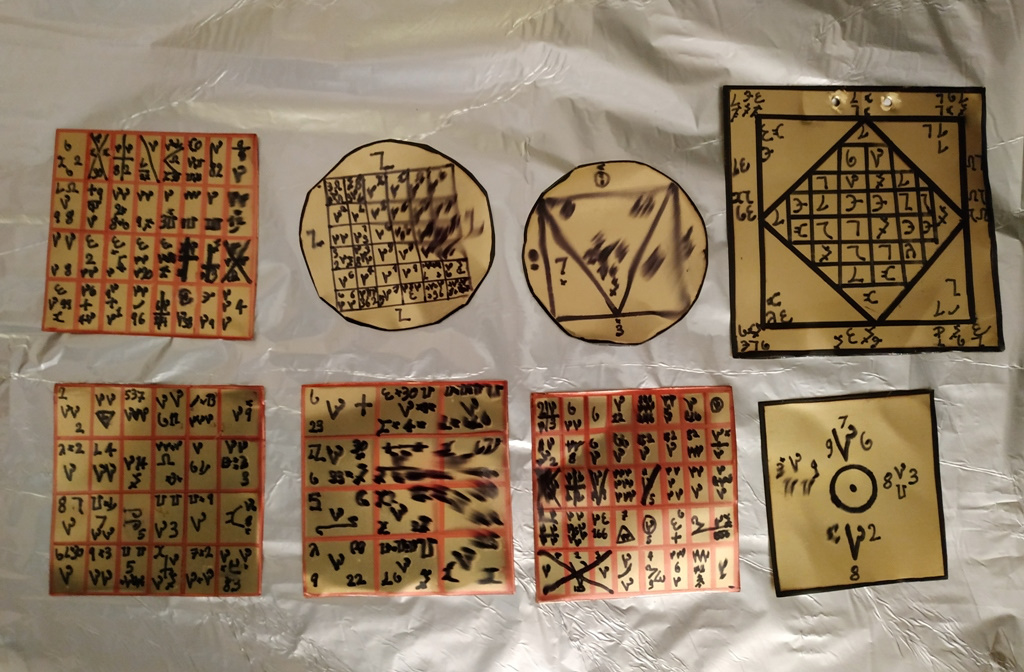 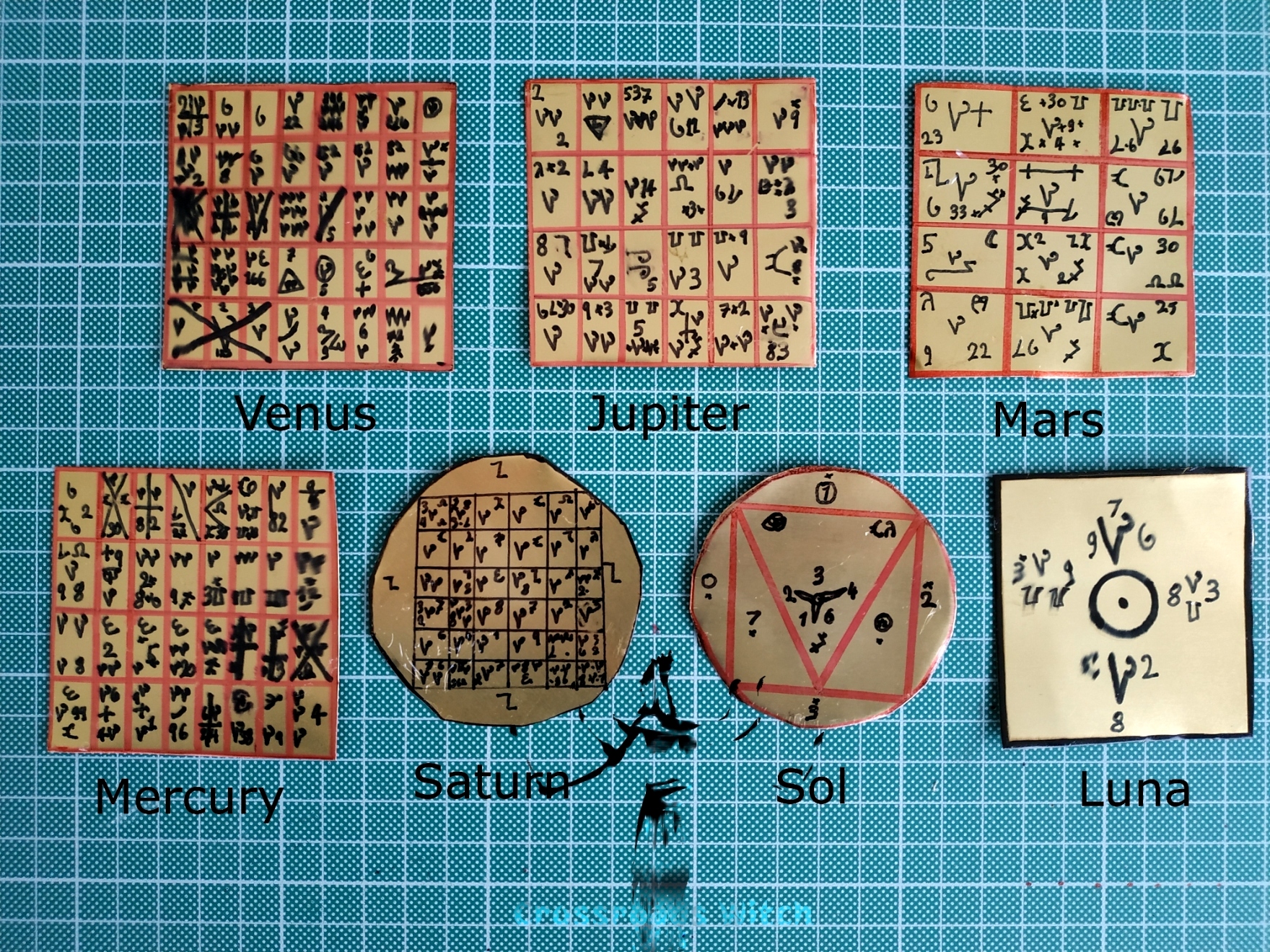 The lamen is a talisman that connects the magickian with the magick machine, the holy table. The magickian wears it in the neck using a gold or black chain or thread and hides it inside of his robe. Modern magickians wear it outside of the robe so that it can be seen. With the lamen, the magickian is connected with the angelic forces he is trying to communicate with and he is connected with the altar, i which the angels will appear in the scrying device. The lamen is made of white paper or parchment. Modern magickians use gold or goldplated silver or brass.

To make it, I cut a brass sheet of 3 mm and I used a permanent marker to draw the letters and the squares. With a hand drill, I opened 2 holes and with the Dremel I made them smooth. I passed it 2 layers of spray acrylic gloss varnish to both sides. 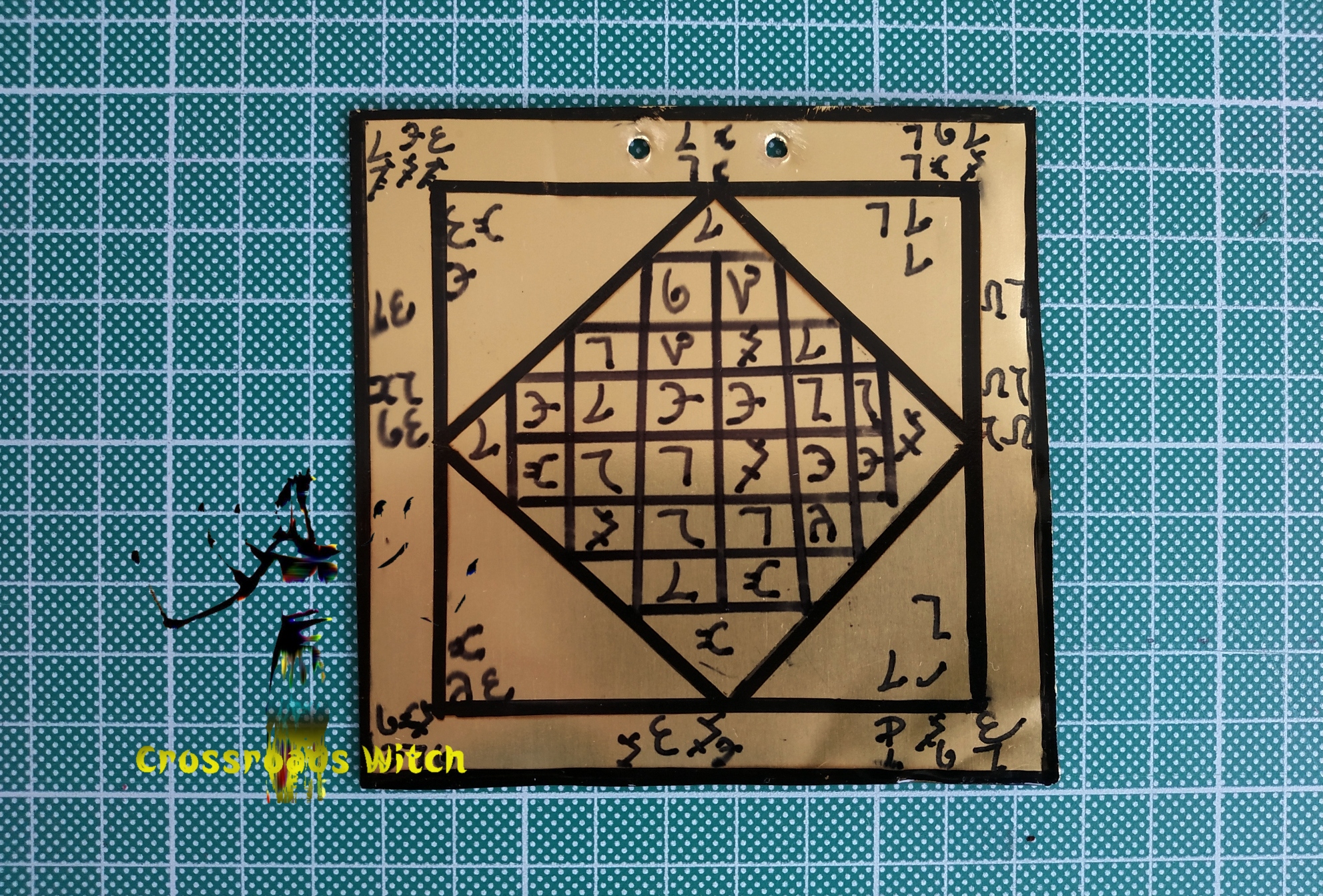