Oscar Wilde (1854-1900) was an Irish writer. He was born in Dublin, studied ancient Hellenic philology and classical studies in Dublin (Trinity College) and Oxford (Magdalene College). He moved to London and became a  famous representative of the English culture. He was a homosexual. He was imprisoned and later he left England and went to Paris, where he died at the age of 46.

He had a family with thee children and he also had three more children with another woman. He used narrative stories to put them to sleep. Those where mainly his stories, yet based on the Irish culture. One of them is the Happy Prince.

Four days before Christmas Eirini and I were out for a coffee in Korydallos, Athens. We started to share stories, experiences, books we read, things we did and this took time as she has moved to Vienna and I live in Athens. She narrated the story of the Happy Prince and the martin who stayed in love and prepared to sacrifice themselves. Touching, emotional, and a story that shakes you from the heart to the hairs. I decided to wrote a blog post these happy days, because the meaning of Christmas is love and self-sacrifice of Christ and this story carries that message remarkably. 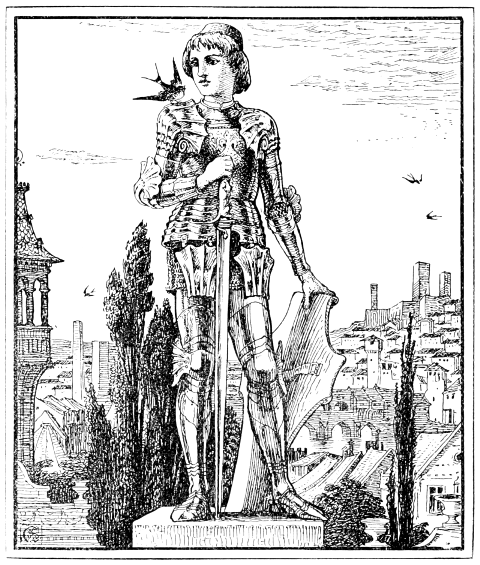 On the top side of a city, there was a statue of a happy prince. It was made out of gold, rubies, sapphires. The prince held a sword. He has happy, good-looking and made others look happy, have hope and even believe in angels. One night, a small martin that was passing his town to migrate to Egypt, stopped at the statue to get some sleep. The prince started to cry. The small martin was awake and started to discuss with the happy prince to learn the reason for his unhappiness. There was a female sewer who was poor and her little son was ill. He asked the martin to take his ruby from the handle of his sword to that family. The martin accepted and then came back. The prince started to beg the martin to stay another night. It refused 2 times, but as the prince insisted, he persuaded the little bird. The second day, it flew above the city and saw its beautiful buildings. At night, the prince asked one more favour. There was a writer in the city who tried hard to finish a play, but he didn't have any wood to burn and keep him warm. He asked from the small martin to take his sapphire eye and give the crystal to the young writer. The same story continued for one more night, where he gave away his other sapphire eye to a little girl who sells matches to live. At that point, the statue was blind. The martin decided to stay and describe to him what was happening to the city. Famine, sadness, misery was everywhere. So, our little guy asked from the martin to take the gold sheets from the body of the statue and share them to the poor. The statue became ugly, but the citizens were happy and the little martin had fallen in love in the kindness of this man. The cold made the martin sick. The little prince had not understood what was happening, because he was blind. So, he asked the martin when it was gonna leave to Egypt. The martin replied that it is going to meet death. It kissed the little prince in his lips and dies to his feet.

The mayor destroyed the statue. The bird was still with him. One day, God took this company to paradise. The martin to say songs and the little prince to say hymns. Those were the 2 most valuable things that this city had to offer.

The martin fell in love with the little prince, because he had love in his heart. He was kind and willing to sacrifice himself for others. When we are good persons we are going to do good things for others. When we love people we are willing to sacrifice ourselves for their happiness. When we are in love with a person, we don't calculate how much we gave and what we received back. Couples are willing to sacrifice some of their wills or even do things that they wouldn't normally do to make their other part happy. People change to be loved and change to make their other half happy and they do that with their own will and full-heartedly. The martin died and the prince was blind and then he also died. They knew that this would happen. The last kiss in the lips shows their mutual love and the act of dying one next to the other shows devotion. They both did good things to others, like a couple of 2 loved people is going to affect others. Lastly, I am going to close this blog post with one main Platonic teaching. Love is the greatest motivation for becoming better humans and better humans create a better world. If there is something to keep in this world and made sacrifices for it, it is the Ideas and love is an Idea and the most powerful force.