The Goddess in a Hellenic Song

20 years ago, a Hellenic singer, Alkestis Protopsalte, published a song and a video clip. Her real name is Alkestis Sevaste Attikiouzel. She was born in Alexandreia of Egypt and moved to Athens due to political events. She was a runner and after that she became a singer. She had a great success. Her contribution is so recognized that she even became a minister of culture for a month in 2015. Both the song we are going to see and the video have strong influences and symbolism of our Goddess Hekate. It is not quite possible that she or the production team had something like that in mind. But the result is a song aligned with Hekate. I have think of it many times. How the Goddess can interfere in our daily lives and pass a message massively without having the concious mind in the route, to understand Her actions. In this article, I am going to share my thoughs with you, regardings a special song, called "lava".

The video clip starts with the singer riding a black horse (symbol of Hekate) and with images of the traditional hellenic family. Next to the black horse, there is a white one, which both reminds us the two pillars of the Tree of Life. The middle pillar has 3 paths and the following Tarot cards: Universe, Temperance, High Priestess which lead from Malkuth to Kether. The whole song is about obtaining knowlegde which leads to a better understanding and at last, enlightenment. Moreover, the High Priestess is linked with Hekate and the Universe shows another aspect of Her.

The scenes that follow show rocks (earth realm, Hekate Chthonia) and sea (water realm, Hekate Einalia), the two out of three realms that the Goddess has power and dominion. Among the mountain tops a smoke starts to appear, which is caused from a volcano eruption. Maybe here, the volcano is the third realm, of the Underworld. After the explosion of the volcano, the singer appears in a long orange-saffrom dress, a color which reminds us of Hekate from the Orphic hymn. We see her on top of a mountain invoking seeing the sea. She says:

"I received communion with the Light, and that's where the heart usually takes you.
(So, she gained spiritual knowledge by following her pure heart)

I received communion with the Light, and I can hold the fire in by chest.
(She has an absolute control of her spiritual power)

Like a volcano that is awakening from a deep sleep,
(She feels that power to awaken ...in her blood)

and what it makes the mountains, cries to be born,
like a volcano that is awakening after 7 generations off,
my lava, my lava, my hot blood."

As far as I understand, she describes the effects of an initiation which came to an end and gave her the ultimate connection with her higher part of the soul. At that point we see a man reborn (rebirth is another connection with Hekate). He comes out of sand. The man is also making the invoking gesture as the singer does. At that time we see a black dog in the scene. Then scenes of sea water and lava follow, combining those two elements very intensively. A new instrument will appear in the music and we will hear the singer explaining that lava is a tear of Christ, the divinity. Immediatelly we see a woman reborn from lava and swimming to the shore.

"I received with lava, the secret words that are said by the humans, even if they looked like crazy, I understood the worries of the living people." After this verse, people fly in the sky, like they have set themselves free from earthy worries and they reach the sky forming a spiral, the symbol of knowledge.

I do not believe that any of the contributors had in mind the Goddess Hekate. The amazing thing I realized by seeing this video and lsitening to this song is that Hekate can send the messages to many people through various ways...

You can see the video clip of the song here.

The verses have been written by Lina Nikolakopoulou, a famous and talented songwritter. The direction had been done by Nikos Soulis. 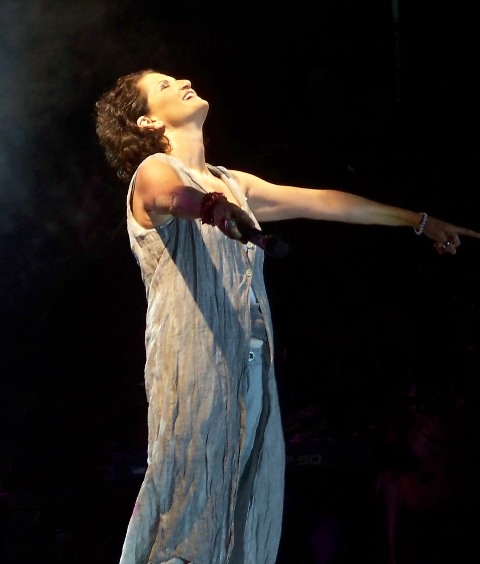