Eros and Psyche is a myth we see included in the book Metamorphoses of Apuleius, written in the 2nd-century a.C. Books four to six contain the myth and it was a common Platonic habit to put a myth when you didn't want to say something openly. The myth starts from point 28 of the fourth book and ends at point 24 of the sixth book.

A king has three daughters. The younger one is the most beautiful woman on earth and her beauty attracts many people from all of Hellas/Greece to come and visit her. They start to think of her as another Aphrodite and they express their admiration publically by even throwing her flowers when she walks. The cult of Aphrodite is substituted by her adoration and her temples were empty, her rituals were not performed, etc. The goddess of fertility is angry because her name is polluted by the mortals. She calls her son Eros/Cupid and tells him to make the young Psyche, the girl, fall in love with an ugly and loser person.

Young Psyche had two sisters, who were already married, but she is not and so her parents go to the oracle of Apollon in Didyma and they were advised to be left on the top of a mountain with the wedding dress so that a wild monster will have her as her wife. This monster lives in the aether, so he is a god or daimon. The parents obeyed the oracle, but they were very sad about the ending of their daughter and her bad luck. This is the point where she realizes that her beauty acted as her curse. The citizens left her to the higher point of the mountain and they return to their houses in sadness. The western wind, Zephyros took her to a valley, in which a house of gold, silver, and other beautiful decorations was built. Psyche realized that her husband is definitely a god. She had invisible servants too, to order and take care of the big palace. At night Eros appeared and had sex with her, but she couldn't see the man. This was happening repeatedly and the young woman realized that she wasn't as unlucky as it was told. She fell in love with her invisible husband, who disappeared at dawn.

The parents of the girl were mourning their loss, now having any news from her. Her sisters searched for her, but the husband advised her not to see them. Psyche asked him to let her sisters come and visit her, as they did.  Her words: "It is best for me to die than lose your sweet touching. I love you, I adore you and you are like a breath of mine." 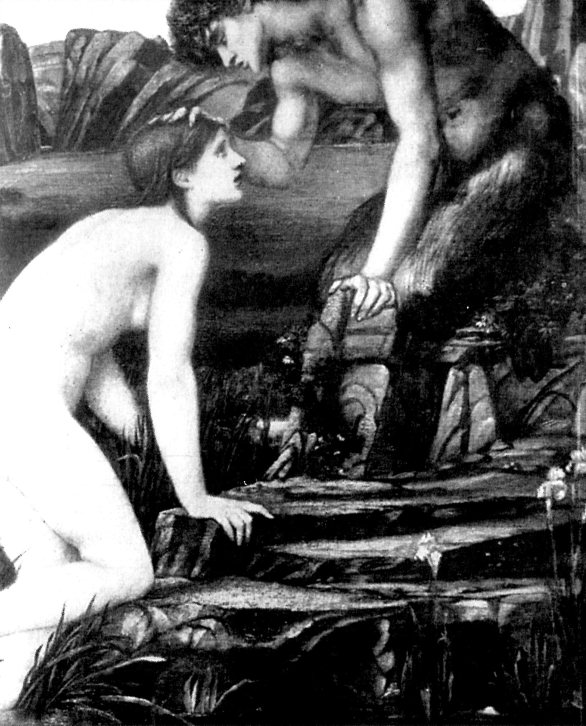 The two women saw that she lived in a palace and they were jealous of her and set her a trap. Their marriages were not as good as hers. They told their parents that they could not find the girl and they hid the jewelry they took from the palace. Eros continued to say to Psyche that her sisters are snakes and sirens and she should not listen to them. In their second visit, we see that Psyche took them to the sauna, fed them, instructed music to be played, and gave them gifts again. At the third visit, they told her that her invisible husband is a snake, and she should kill it during their sleep with a razor. They lied because they wanted the groom for themselves.

During the night, she took the lamp to see her husband, and instead of a snake, she sees an angel with wings. She sees Eros, the child of Aphrodite and the god of love. No monster, no snake, only a beautiful god. She hid the razor to her chest. She saw the arrows and as she examined them, she cut herself, so she started to fall deeply in love with Eros. She kissed him to his body and one drop of oil fell into his shoulder. The young god wakes up, realizes what happened, and leaves.

Eros wasn't returning to the palace and so Psyche went to kill herself into the nearest river, but the river saves her. She meets Pan who is advising her not to commit suicide, but to pray to the young god. She started wandering trying to find her husband on the earth. She arrived to the city where her sister lived. She told her that there was no snake, but god Eros. Her sister left the house and went to meet Eros, but the wind didn't help her and she died on the rocks. The same happened with her second sister. Psyche punished them for their ill advice.

In the meantime, with Eros not working and Aphrodite not working too, there was a mess in human communities. New marriages didn't happen, there was no enjoyment, no friendship, no socializing, kids didn't love each other and marriages didn't honor. Aphrodite was lecturing Eros, who stayed with her to heal from the burning, and we see a mean goddess, even threatening him that she will cut the wings of Eros and shave his head. Demeter and Hera trying to make her see that Eros didn't do anything bad, he just loved a woman. Ok, Aphrodite had declared her as an enemy, and Eros instead of punishing her, married her, but still, he didn't do something unethical.

Psyche wandered from town to town and she meets Demeter in her temple. She kindly asks for her help, but she can't do much, as Aphrodite is her friend. Then, she found the temple of Hera and after the invocation, Hera appears and tells her the same thing. Aphrodite went to Hermes and asked him to find Psyche. Psyche appears and she is punished by Aphrodite. Then she makes her do difficult things, in order to kill her. In the meantime, Eros has not been healed and is imprisoned by Aphrodite.

The first task is to divide some seeds from a bowl. Ants gathered and helped Psyche. The second task is to gather the golden wool of the wild and poisonous snakes. The cane of the river helped her and she gathered the wool. The third task is to gather water from a mountain well, gathered by snakes. An eagle appears and helps her. As she manages three tasks so far, Aphrodite calls her malefica, a bad witch. The fourth task is to go to Hades and meet Persephone who is going to give her a beauty box. Psyche went to a tower to kill herself, but a voice advised her to go to necromanteion of Tainaron. Psyche goes prepared to Hades, knowing what to do with Charon, Kerberos, and the spirits. During her return, she opens the box and falls into a deep sleep. Eros was healded and went to save her. He took an arrow and pinched her to wake up. Psyche completed the fourth and final task by giving the box to Aphrodite.

Eros went to Zeus and asked for his help. He is gathering the gods and he announces the marriage of Eros and Psyche. To make the marriage valid, Zeus made Psyche immortal by feeding her ambrosia. Eros and Psyche had a daughter, Hedone, meaning pleasure. 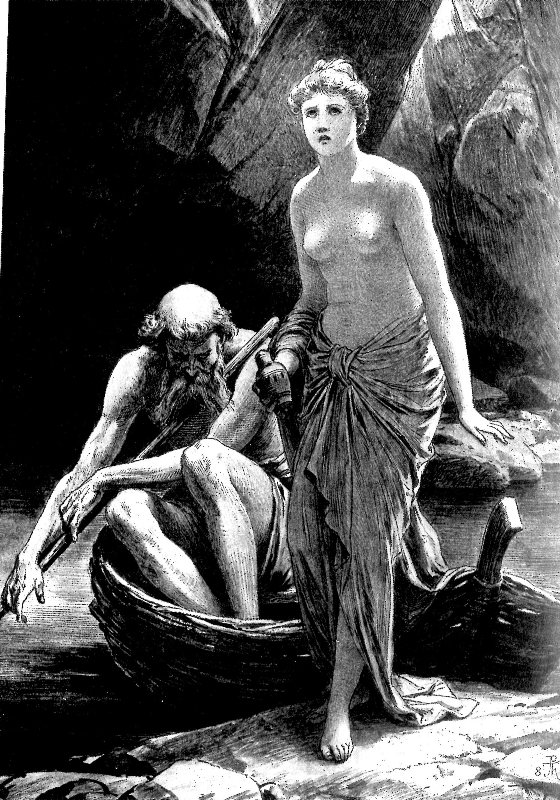 Psyche means soul and Eros means love in Hellenic, so the myth is about the difficulties of the union of the soul with god. The initiate is tested four times by performing tasks and becoming better and better to finally unite with the divine and be immortal. Other gods, can help, but they won't do the work of the initiate and so Pan, Demeter, Hera don't help young Psyche. After the end of the tasks, Psyche and Eros will be inseparable, as difficulties make the links between them stronger. The hidden Platonic teaching here is that through love we can reach Agathon (the good) and participate in the invisible world. Love is the main motive to become better persons, brings up the most creative aspects of us, and inspires us to be spiritual beings, even do things that are unthinkable or impossible, like Psyche did. Aphrodite appears as a bad goddess, but she plays the role of the priest, pushing the young girl to reach her limits and come out as a winner.

Another thing we notice is that both of them have perfect love and perfect trust (Wiccan saying) and they manage to be together besides the fact that Psyche is mortal. So, with love everything is possible. Their love is true and inspiring. Another notice is that Eros disobeys his mother's order and instead of making Psyche fall in love with a man of misery, he falls in love with her. Here we see the human factor, we can ignore unfair behavior with ease and chose not to be a part of this circle.

Following the teaching of perfect love and perfect trust from the myth of Eros and Psyche, we should be aware of the three virtues of Hekate, thus faith, truth, and love. The couple of the myth has faith and love to the biggest degree possible. The three virtues purify the person and lead it back to God, as we already know. They are the keys of methexis and the keys of Hekate, so this myth could be strongly associated with Hekate's cult. The missing virtue is truth, thus the study of philosophy, and it should be missing from the myth as this is an initiatory path. Philosophy will be followed afterward. Let's bow to Apuleius for leaving us this great myth.