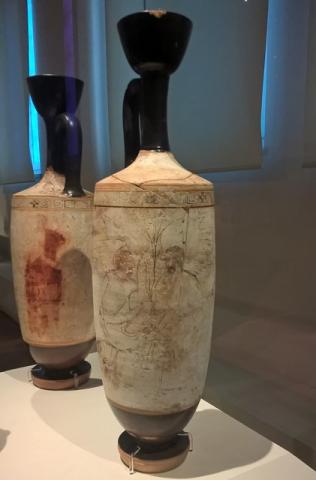 Hades is a spacious place in the center of the earth where the people's souls were going after their physical body's death. This place's main rulers are Plouton and Persephone but other gods such as Hermes, Hekate, Fates and Nemesis have power and duties in Hades. There were five rivers:

The whole place was derived in four main sections related to people: Court (Δικαστήριο), Purgatory (Καθαρτήριο), Tartar (Τάρταρος) and Elysian Fields (Ηλύσια πεδία). There was one more section where the Gods were staying. An extra section existed for the souls of the unburied bodies but it was right outside of Hades.

The Purgatory was a place were the people's souls were staying right after their death to be cleansed from the sins that were forgivable or very few. Tartar was Hades's house of bondage were the souls were imprisoned and punished because of the unforgivable sins the had done. Elysian Fields was a blissful place where the righteous and fair-minded souls were going.

The form of Hades was like a cave which was between a forest surrounded by rocks, and the black waters of Styx Lake which were encircling Hades nine times. Before the entrance of Hades there was the dwelling-house of beings like Sorrow, Illness, Age, Fear, Death, Sleep, Discord etc. After that, there was the road leading to Acheron river where Charon was. Beyond this place, it was the house of the dead derived in seven regions.

Every single day, the Fates were writing in lists the names of the people that were going to die that day and then the Fate Atropos handed over the list to Hermes. After that Hermes was coming up from the underworld and according to the names of the list, he was visiting every ill person, foot passenger, marine, warrior etc and he was touching them with the Kerykeion and the person was passing away. After he had collected all the souls, he was leading the way by holding the Kyrikeion raised so that the souls could see him. He was taking them until Acherousia Lake. Persephone was the one that gave these duties to Hermes.

After the souls had arrived they were coming into Charon's ship with Hermes. There was standing the Fate Klotho and she was validating who was each soul, how he died and if his body was buried. Each soul's body that was not buried, had to stay outside of Acherousia Lake for one hundred years. Goddess Hekate was guarding them for 100 years and after that they entered Hades. The other souls were traveling by boat approaching the gate of Hades which was guarded by Kerveros, a terrible three-headed dog. Every soul before getting off the ship had to pay one ovolos (ovolos is money, a coin) to Charon. After the disembark Charon and Hermes were returning back. The souls were going straight to Court. Sometimes Hermes was accompanying them and then he was sitting in on the Court. There was only one road leading to the Court from the entrance of Hades. From the Court were starting three roads: one leading to Tartar, one leading to Elysian Fields and one in the middle of the other two that was leading to Purgatory.

Hekate and Hermes are sharing this property of leading souls of the deads to hades, the place of the dead. The word psychopompos is a synthetic word of the two words psyche and pompos. Psyche is the soul. Pompos means the one who sends, who guides, who guards. Hekate is the protectress of the unburied souls and she protects the souls of the deads. As Kleidouchos, she holds the keys of the doors of Hades. The role of Hekate as psychopomp is quite logical because she is the Goddess of the thresholds of life.

Read this article on Plutarch and the soul after death.

Image: Lekythos depicting the God Death and the God Sleep carrying a soul of a man, National Archaeological Museum of Athens