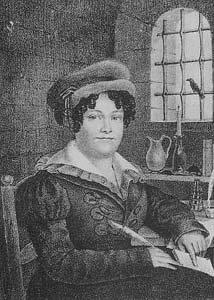 Cartomancy is my field. While I was reading cards for a friend, I thought it might be a good idea to write about the hand of Hekate in the Lenormand cards. In the following article you are going to read about this method (French Cartomancy) and how I see the main properties and the main energy of Hekate in those cards.

Anne Marie Adelaide Lenormand was a very famous oracle in Paris at the 18th century. She was born in 27th of May 1772 Her parents were not poor but not rich either. Her father died one year after her birth. Her mother, Rosay, had to get married. So, Anne Maire was raised by different mothers, because his second one also died. Her third mother was very young. Her childhood was a nightmare. She achieved to find a job and go to school, but she was kicked off because she did a very successful divination.

Anne Marie liked to read, she tried to learn cartomancy with regular playing cards and the she took some astrology lessons in 1789 Her interest about divination was growing and she managed to learn Tarot and arithmology. She opened a library, in which she performef divination, especially cartomancy and astrology. Her successful oracles made her extremely famous and rich. Napoleon, Marat, Rovespiere, the czar of Russia and many others were her clients.

She lived in England and France. She run successful businesses and she knew different divination methods. The costs of her services were high but she offered also low prices, depending the divination method that she used. Her writings were published by her and she also made a special card set. Some years after her death a new card set was created, the one we use today as Le Petit Lenormand or just Lenormand cards.

There are some really good decks in the market. I use the French Cartomancy or Cartomancia Francesa. I keep it inside my black-red pouch with the symbol of the C.O.H. embroidered. I believe that Hekate's symbol act as a magnet to Her energy. It is nice to have Hekate near. For a Witch, having Hekate near, is a blessing, no more, no less.

I want to present some cards that are related with Her energy. Lenormand's cards are 36 Normally, Lenormand cards are read in pairs, not one by one. Combibations will be presented in other articles. Someone who has read a lot about Hekate, see Her everywhere. It would be normal if I could write about all 36 cards, but I am going to present some of the main properties of Hekate related to the cards and some epithets. Let's do some basic work.

This card represents the house, the family, close friends, a home office, a house job, roomates. It indicates a safe place, security and calmness. It is associated with Hekate's properties of guarding the house, watching the family and protecting the belonings. Hekate had a special place close to the door in houses as well as in temples too.
Epithets: Tlêtê, Episkopos, Phylake, Prothyraia, Reksipyle, Pasimedeonsa

This is mainly a negative card. It shows quarrels, opossite things, intentse communication, punishments, vioence, nervous tension and also sex. The whip is one of the tools of Witchcraft. Its main use it to ritually cleanse someone or to punish. Those qualities are shown also in Lenormand. The whip card shows passion for love and for the things you believe. Hekate is not a Goddess for the ill-hearted, She is a fierce power, a liminanl Goddess who will raise you to the heavens and help you see yourself. Also, whip is one of her tools.
Epithets: Brimo, Oksyboe, Daspletis, Phobere, Phthoregene, Apotropaia

A card for new beginnings, innocence, childish actions, (like Fool) and also it shows a kid. Hekate is protector of women who are going to give birth and she also protects young children. Hekate is there when someone starts something new.
Epithets: Kourotrophos, Eilitheia, Pantrephô, Geneteira

Fox is a second job, or a hobby that becomes a job, it is manipulation, deviousness, alertness, someone who cannot be trusted. But fox is someone who has potential, who is smart, who knows a way. So, I see here a cunning man, who can do things his own way, without having to confront the danger straightly. A Witch is that kind of person.
Epithets: Daidale, Chthonia

This is a symbol of power, protection, courage, physical strenght. It is related with the energy of the Earth. The card shows also someone who is a leader in his job, who has employees ...so financial power or many pentacles (=coins) in his possesion. This card may also show a mother!
Epithets: Alkime, Aizeie, Chthonia, Pandamateira, Geneteira, Daspletis, Apotropaia, Krataie

Stars have been used as a sign of hope, of guidance and tranquility. Stars offer directions, a new path. Also, this card is connected with spreading things. Hekate offers guidance, She can open a new path for the person who asks, She has calming properties and She can make something or someone famous. Also, the moonless sky is related with Hekate's Deipna, an offering ceremony to honor Her and the spirits who wander at night.
Epithets: Astrodia, Polykleite, Eidolie, Pangaia, Sôteira, Tlete, Ourania, Skotia, Nykterie, Propolos

The card shows a loyal friend, someone you can trust. Also, a friendship, protection and guidance like a counselor. A person you can rely on. The dog is also a symbol of Hekate and when you are a devotee of Hekate, you should better be loyal to Her and make your offerings daily.
Epithets: Kunolygmate, Lykaina, Ippokyôn, Skylakageia, Pasimedeonsa, Skylaketin, Apotropaia, Episkopos, Phylakas

Options, this card is about options and extra choices. It also shows roads. Hekate is the protector of travellers and at crossroads you can meet Her. In ancient Greece statues of Hekate were crossroads and of Hermes at 4-way crossroads. Hekate is closely connected with choices, thresholds, transitional periods, quests and guidance.
Epithets: Enodia, Einodia, Dadouchos, Phosphoros, Tetraoditis, Trioditis

Another symbol of Hekate. As in magick, key is opportunities which are opened now by a force. You can expect new things arise when this card shows. It is a very positive card. A yes card. This is the key of destiny, which is provided to the querent for this period. Doors open easily for you and the things you have tried, will bring success.
Epithets: Kleidouchos, Pandoteira, Arege, Pasikrateia

In its literal meaning only, fish show the sea and fish of course. This card reminds to us the sea properties of our Goddess, Hekate Einalia.
Epithets: Einalia, Limenitis, Buthia