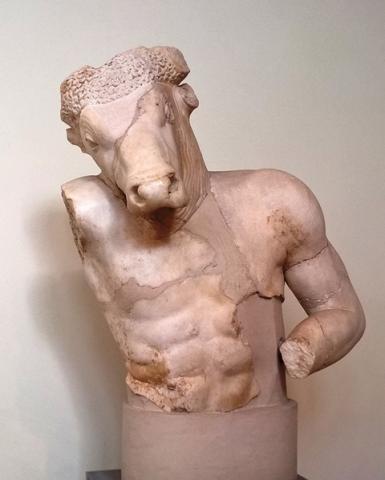 Myron was one of the most significant sculptors in ancient Hellas comparable to sculptor Pheidias. Among many statues that decorated the hellenic civilization of the 5th century BC was a statue of Hekate recorded by Pausanias the Geographer.

Who is Myron of Eleytherae

Myron of Eleutherae (Μύρων από τις Ελευθερές) was the earliest of the great masters of Greek sculpture and lived the mid-5th century BC (480 BC - 440 BC). He was born in Eleutherae on the borders of Boeotia and Attica. Myron’s name was spoken of in the same breath with Polyclitus and Lysippus, with Phidias and Praxiteles. He is recorded, however, to have been a pupil of the Argive sculptor Ageladas, who was for a long time the acknowledged- leader of the Peloponnesian school of athletic sculpture; and it is said that his fellow-pupils were Phidias and Polyclitus.

The main characteristics of his sculpture style was the animate, real and natural style of the figure as well as the expression of expressive violent, bold and acute movements. The clear lines of demarcation secures that every part is in harmony with the whole. All the above details, while observing the sculpture, give the impression of a living body. Myron worked exclusively in bronze, and he made some statues of gods and heroes showing great interest and activity in the representations of athletes as his subjects were more of athletic type. He kept to the archaic rendering of the hair and he devoted his attention to the forms of the body. Several of his most famous works were in Athens, and it is probable that his artistic career was mainly associated with that city although works of his were at Olympia and at Delphi. Some of his most famous works are

Image: Roman copy of the Minotaur of Myron, National Archaeological Museum of Athens