Queen of the Wands 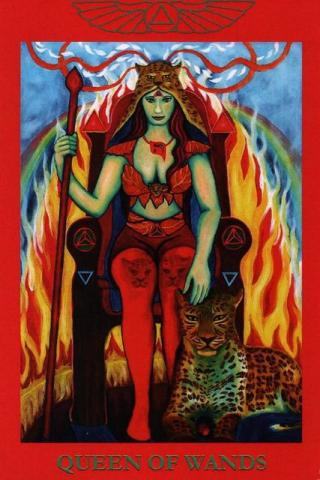 In this article we are going to examine if and how the court card of the Queen of the Wands relate with the Goddess of the Crossroads. The reason for this correlation is an esoteric motivation I had to buy a printed image of the Queen from the Golden Dawn Temple Tarot. Without knowing much about the symbolism of this card in the Golden Dawn decks I put it next to a classical image of Hekate and they are going fine. Let's see how this happened.

The set of the wands represent the masculine energy of Yod from (YHVH), the world of archetypes, Atziluth, energy, movement, efficacy and the element of fire. The Queen is the water element and the Heh force of Tetragrammaton. The Queen is also attributed to the third sephira, binah. Let's see how those correspondences apply to Hekate. Hekate can be seen in binah with the role of the Cosmic Soul. She is female and her mirroring sephira is Geburah, also related with Her powers. Binah has the energy of saturn. This understanding is also essential to see the wisdom applied from Hekate to the practitioner's life, as She is leading him/her to the greater understanding of the mysteries. This phrase can be found in many rituals related with Hekate. The female watery energy in the world Atziluth combines fire and water, thus we are dealing with great power. The spark of light that takes is associated with this sephira too.

"A crowned Queen seated upon a throne with steady flames beneath. She wears mail and holds a conical-headed wand. A leopard is at her side. Her emblem is a winged leopard's head." -Book T

The work that has been done by the artist, Nicola Wendrich corresponds with the classical Golden Dawn teachings. Sandra Tabatha Cicero has also done an excellent job in the Golden Dawn Ritual Tarot.The Queen sits in a throne, applying her steady force. This energy is creative and persistent. In the Covenant of Hekate, members participate in creative projects. Also a Witch crafting his/her own tools from talismans to the sword has to be creative. Creativity here is a result of great energy that the Witch has inside his aura. The flames behind the Queen show that energy very vividly. The leopard is a fast animal with sharp teeth (Hekate Brimo here? or Hekate drinking blood?) to tear the flesh of animals that makes long jumps. The animal is very strong with huge muscles. Hekate is a warrior Goddess (an aspect we forget nowadays) and she is protecting athletes (like Artemis). Leorpads like to live close to rocks, they are solitary animals but they can adapt. In the orphic hymn we read that Hekate likes solitude (phileremon). The skin of the leopard has a long use in ceremonial magick from the ancient times. Her skin helps to be invisible and chase, but the reason here is that it reminds fire. The colors are red, orange and brown, but also Hekate is known as a liminal Goddess. The world liminal has a meaning "barely perceptible" and invisibility can be found here. There is also an invisibility ritual with invocations of Hekate and Helios.

As Queen of the wands, She is taking decisions and She is giving orders in a steady way. In my mind, the Empress Theodora is a typical example of that energy. Hekate also speaks in a determined way and She wants Her devotees to have self-discipline and be serious. Hekate is not the Goddess for the Saturday Witch. She is trying to make Her Witch better and better. So, challenges, new ideas, knowledge come in the way of the Witch all the time. The Queen is kind hearted, generous, tyrannical an revengeful. There are written experiences that descibe Hekate with those negative characteristics. Hekate hates the unjust.

The Queen is very attractive, beautiful and sexy. Hekate is one of the most beautiful Goddesses and She is a young Goddess. The maiden aspect of the Wiccan Goddess is close to Hekate than any other aspect. Not many people insist on that nowadays, but Hekate is a very beautifull Goddess.

Let's see what Paul Foster Case has written about this Queen: "A kind and generous woman, but resolute in the face of opposition. Strongly psychic and intuitive, but practical in applying her psychic gifts. Intense, magnetic, friendly to the Querent, and favorable to the success and business of the Querent."

As we see the Queen is very attractive, she is full of energy, she inspires creativity and you don't want to mess with her. Hekate as the Goddess of Magick can help the practitioner obtain a strong base in Witchcraft, by working systematically and sometimes fast. If you see some youtube videos, there are practitioners that describe how many things they learned in Witchcraft when they became Her devotees. Hekate likes being practical, that's why we see Her in Yesod too and the maiden aspect in Malkuth.

In the Book of Thoth we read: "The characteristics of the Queen are adaptability, persistent energy, calm authority which she knows how to use to enhance her attractiveness. She is kindly and generous, but impatient of opposition. She has immense capacity for friendship and for love, but always on her own initiative."