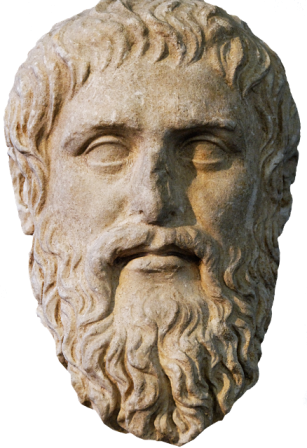 As we have written previously on piety from the perspective of different ancient Hellenic writers, we will continue that tradition today, by offering a taste of Platonic theology as addressed in the book Laws, which is the last dialogue of Plato. It consists of 12 books and an additional one. In the tenth book we read about three major crimes, which are three cases of disrespect against the gods. The first case is the notion that gods do not exist.  The second case is that gods do not care about the problems of mankind.  The third case is when humans attempt to bribe the gods with offerings so that the gods won’t punish their unjust actions. These three instances are considered crimes against the gods and Plato proves that ignorance is the cause of them.  He also proves why those three notions are wrong.  In this article we will provide a synopsis of the tenth book, centering around piety.

We have three participants, Kleinias from Crete, Meggilos from Sparta and an Athenian who expresses Plato’s views.  The three start to walk one midsummer day, discussing the topics of the constituents of a good educational system and the effective organization of a city-state, in other words their discussion deals with education, ethics, and politics.  By taking a long walk from Knossos to the cave of Zeus at the top of the mountain, Ide, they have all day to discuss these topics.  Quite atmospheric, isn’t it?

Let’s examine the first case.  Plato does not feel at all comfortable discussing the subject of the existence of the gods, as it is so obvious to the Hellenes as well as to the barbarians (886.a) that gods exist.  He sees the universe as a creation of god, and likewise time, the seasons, etc., this harmony implies a great programmer.  Plato gets angry that he has to prove the existence of gods and that there are writers who teach in their books that matter was created first before all else (887.a & 887.d).  At this point we read that Hellenes regularly prayed to the gods, made sacrifices to the gods, and participated in religious celebrations.  They appeal to the gods with their problems and address them for the things they can give to them, they salute the gods in the rising and setting of sun and moon. So, for a child raised in such an environment, it is uncommon to develop doubts when he becomes a young man.  In the case that doubts develop, Platο is certain that he will change his view in later years and he should not act in any disrespectful way until then (888.d).  It is up to the lawmaker, who should act in such a way that those opinions do not spread to other people, because atheism is a disease, something that Plato repeats again in a later point of the dialogue.In the second part of the text he is more specific, terming it a passion to disrespect, thus a disease of the soul.  Plato uses astronomy in his dialectic to prove the existence of gods, but we won’t go into this here. 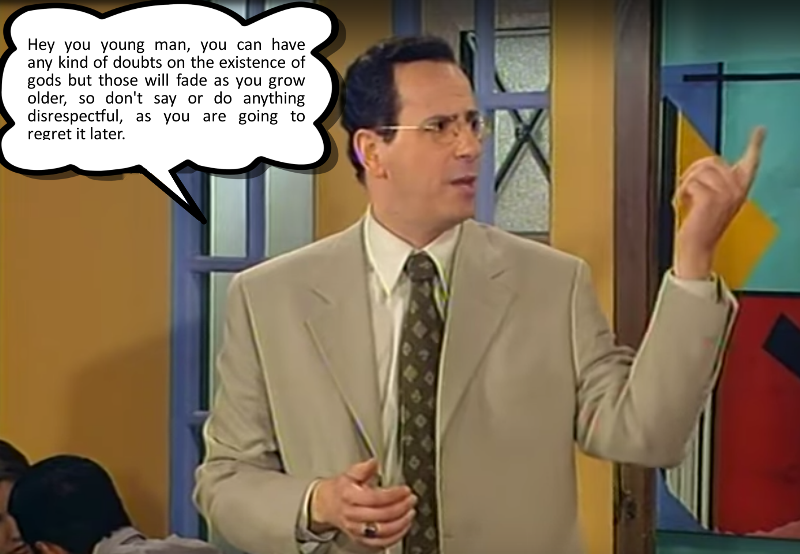 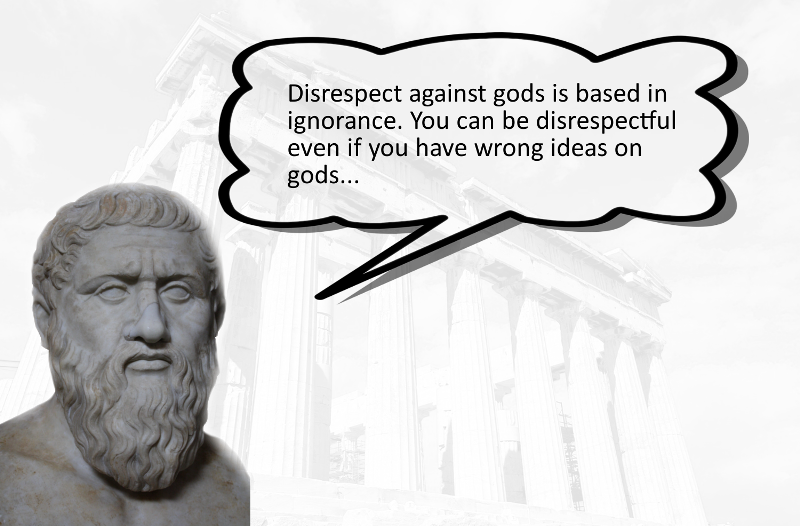 At the end of the dialogue, Plato again speaks through Athenaios about the disrespect towards the gods that we express when our thinking or our actions towards them are fallacious.  He suggests that in cases of such disrespect the reactions of the fellow citizens should be immediate and with severe penalties.  Plato accepts that a person might have doubts on the existence of the gods and at the same time be a man of good character.  In such cases, he worries not so much for the individual, but about the spreading of atheism throughout the population of the city.  He also addresses another problem: the wrong type of devotion.  He is against home altars and household cults because people tend to mix theology with personal imagination.  Thus, they make sacrifices, erect shrines and altars and they elaborate the worship of a local deity based on dreams, ghosts, or visions they have glimpsed, making weird and improper for promises to gods.  For Plato, it is difficult to establish a proper type of religion or devotional practice towards one god.  People confuse their own ideas about the gods and thus act disrespectfully without knowing it.  To solve those problems Plato suggests the use of the public shrines and altars for prayings and sacrifices.

At this point, where the dialogue ends, I’d like to elaborate.  Plato refers to false ideas that people might develop about the gods which cause them to slip into an improper form of worship which is no different than a superstition.  In later years, Plutarch, of the Middle Platonic school of thought, will write that superstition, the fear of the gods, is another form of atheism. Theophrastos will characterize superstition as a disease, as Plato does with atheism. Zenon, the founder of the Stoic school, will characterize atheism as foolishness and piety as the science of serving the gods.  The Stoics would agree with Plato regarding the false views of the gods that people develop.  Epictetus defined piety as having the correct understanding of the gods and he wrote that priests and priestesses should be chosen (more). On the topic of sacrifices and offerings, Porphyry will write many years later, that God has no need of our offerings and furthermore, people who are focussed on money (and/or material things), are wrong and in making offerings, those offerings are not only disrespectful towards the gods, but they pollute the sacred temples  (more). He describes what kinds of offerings we should provide and how to make them.

So, we may have magical papyri, curse tablets or poppets extant from ancient Hellas which indicate fallacious practices, but we should also keep in mind the advice from the philosophers who formed the theology of their time.  Plato’s ideas were passed to many different schools and we have examples of other writers who fought against the poets and sophists who propagated fallacious things about the gods.  Poetry influenced the masses because it spoke to the heart, that is why it was adopted by the Stoics as a means of rhetoric to persuade the masses on righteous things.