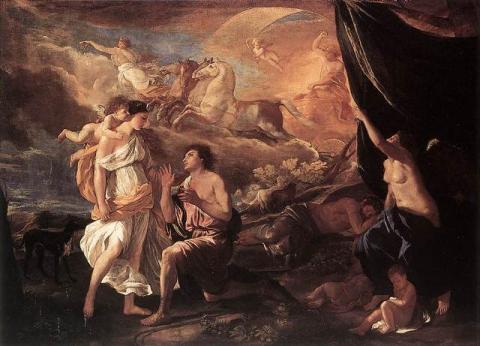 In this series of articles we are going to see epithets of the Goddess Hekate through the Greek Magical Papyri. An abstract of the spell, that Hekate is called for help, will be available and then we will analyze the etymology of each epithet. Of course there will be a brief description of the pronounciation.

The spell is a complex ceremony for sending dreams, restrain a charioteer or his horses, binding love, making someone be hated. The most common use is for using the power of the cat-headed god to restrain the enemies of the magician. Those enemies had caused harm to the magician. Another use is for any wish of the magician. A cat is required, water, an egg, papyrus, cinnabar ink, lamps, styrax etc. The incantations are for the spirit of the cat, the God Helios-Mithras, Hekate and Hermes, Seth and Typhon. They are very strong ones using voces magicaes and sacred names of the Gods.

The magician takes a cat and while is drowning the poor animal he calls the cat-faced God to show his strength against the enemies of the magician. He is called by an animal sacrifice, an incantation and by the use of voces magicae sacred names of the God.

After that it takes some parts of the cat and makes lamellae. In papyrus it writes by cinnabar ink the names of the chariots, the charioteers, the racehorses. In seven pieces of clay the witch should light seven lamps/candles and burn styrax so the God will be good with him. The cat has been put in a tomb. A strong evocation begins. The God is an angel, a chtonic one (maybe Hermes), it is called by the names of the great chtonic god and the implacable god (2 Gods). Magical names are used again. The water that was used in the beggining now it is sprinkled and the incantation of Hekate starts (44-50).

Then the incantation continues with the call of the spirit of the cat, which is called to make the magician's will come true.

Again the magician engaves the lamellae and conjures the angel of the cat to help him. Names of the God are used in this incantation like IAO SABAOTH ADONAI AVRASAX and the formula IAEOO(ΙΑΕΩ). Also the Mithras is called with the epithets DAMNAMENEUS and chtonios. The cat faced God is called again, but this time it is named Seth-Typhon. The magical formula MASKELLI MASKELLO is used to aid the conjuration.

The magician should continue in the sunset holding hair of the cat in his right hand and whiskers of the cat in his left hand. He should make a long incantation to Helios, calling him Mithras, Meliouchos, DAMNAMENEUS, saint king etc. using the MASKELLI MASKELLO formula again, the names of the God Adonai, Abaoth, IAO, the names of archangels Gabliel, Raphael, Souriel, Michael.

Αρκύς is the epithet. It is the web of the hunter. It can also means the danger. Arkys, ar -kis with the tone in i.

Νέκυια is the ceremony of calling the dead spirits to ask them questions. It is an epithet that is refered to the dead spirits or the underworld. Pronounciation: n'e , e like air ki-ia. The raise of the voice is in the tonic mark.

Hermekate here is not reffering to the stele (see Irene's article) but as a combination of both powers of Hermes and Hekate.

Seth is called as he is associated with actions of confussion and fear, eclipses, illness, earthquake, danger, etc. The ancient text calls him Σηθ. Typhon is the hellenic name of Seth. He is the son of Gaia (earth) and Tartarus (hell).