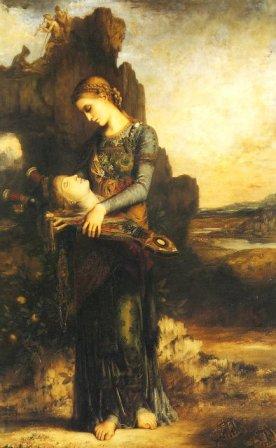 Today, the Goddess Hekate has many followers all over the worlds, who write their hymns to invoke her and they share them widely.

Hekate of the roads I call you, you who are at the three roads, o beautiful one

You of the sky, of the earth, of the sea,who are dressed in with a saffron clad

Daughter of Perses, who you like to be alone and among the deers

In the night, with dogs howling around her, invincible queen of all world

You who have powers of the bull, queen who holds the keys of the whole world

Leader queen, nymphe, who who take care of the children, who walks in the mountains

We ask you to come in this sacred ceremony

with sympathetic attitude and without anger to the leader.

Image: Gustave Moreau, a woman carries the head of Orpheus back to Thrace.