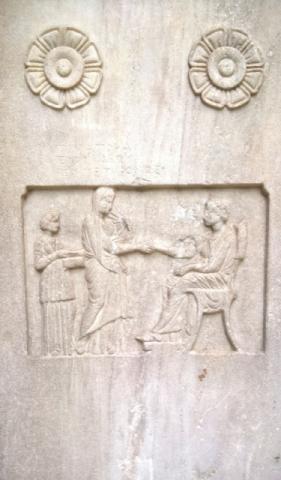 Hekate in Necromancy by Loukianos

In Orphica Argonautika Orpheus made three magickal poppers from barley flour, she threw them in the necromantic fire and then three small black dogs were sacrified to Hekate in order to call Her at the necromantic ritual. In Loukianos we read the great necromancer Erichtho was threatening a soul that was not responding to the evocation by calling forth Erinyes to torture the soul and then by threatening the she will call Hekate to appear in the visible earth world, she also threatened that she will reveal the real food that Persephine ate in the hades. In another incident, she was threatening the spirit to torture it with Erinyes. She continues by saying that she will bring Erinyes to the light of the sun and that she will reveal Hekate and some secrets of Persephone. She is also using threats that she will call Gorgo and that she will reveal the secret name of Hekate! After those threats, the earth opened a gap and the soul came from hades up to the earth realm. In another writing, Loukiano's character Eukrates is wearing a magickal ring, given to him by an Arab. Eukrates met Hekate and Her dogs in the forest. He used the ring to protect himself and Hekate disappeared in the ground. Mirthovarzanis, the Babylonean Witch, in Menippos dialogue of Loukianos is calling Erinyes, Persephone, Hekate etc. along with voces magicaes in necromancy. An earthquake happened from the incantation and the barking of Kerberus was heard. Mirthovarzanis took his client and took it to a tour to hades. Eucrates of Loukianos is wearing a magickal ring, that an Arab had given it to him. When he met Hekate in a forest, he saw Her dogs which had the size of an elephant. Eucrates used the ring to banish Hekate, who open a hole in the ground and disappeared but the ghosts came out and the dogs disappeared too. This extreme example of Loukianos shows how people were afraid of Hekate and how much they respected Her.

Hekate in Necromancy by Argonautica of Apollonios

Medea, a hekatean Witch is guiding Jason to a ceremony in which Hekate is summoned to help Jason. In the ceremony, during midnight, he is doing a clensing bath, wears a black robe, is digging a hole in the ground, lights a fire and the he is sacrificing a sheep. Hekate is coming and Jason is pouring offerings in the fire. She is accompanied with dogs and snakes and she also holds torches.

In Argonautica of Orpheus, Media is digging a hole and she has carried some wood of juniper, ramnus, popplar, cedar to set up a fire. Some verses are missing. We find Medea using pharmaka (herbs). Jason is making the barley pies for the offerings. He left them on fire. He sacrifices three black dogs. The blood of them are mixed with some herbs and then it was put inside the belly of the dogs. They left on fire as an offering to Hekate. The evocation begins. Firstly, the three Erynies are coming. And as the fire is growing, the visible appearance of the Gods and spirits is happening in the flames. A woman with an iron body, called Pandora is showing in the flames and Hekate, the daughter of Tartarus. She had three heads (trissokarenos). In the right the head was from a small female wild dog, in the center the head was from a wild snake and in the left side a horse head appeared. She looked terrible like a monster. She was holding two swords in her hands. After them, the Poines appeared, the Goddesses of punishment. (More about animal headed Hekate.)

Hekate in Teiresias of Statios

In that work the necromancer is opening four different holes in the earth and sets up four fires. For Persephone, Hades, Hekate, Erynies (Furies). Teiresias is threatening the spirit by saying that he will call Gorgo or he will speak the secret name of the Goddess Hekate.

Neron, the Roman king had killed his mother Agrippina. The Furies (Erynies) were haunting him and they used torches and whips to make him afraid. Both weapons are symbols of Hekate. The torches could be used as a weapon like a stick for hitting and as a fire weapon aiming the head, armpits and chest. Nero could not be an initiate in the Eleusinean Mysteries. He was heavelly involved in Witchcraft, so he called her spirit through necromancy to calm her down.