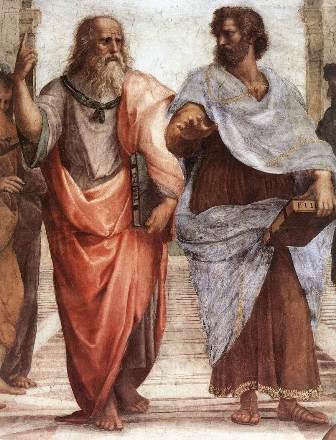 If someone asks why we should care on the soul, we have to answer that every spiritual person who is involved in some way with the ancient Hellenic religion, should have basic understanding of the ancient views on the human soul. Moreover, devotees of the Goddess Hekate should have special interest on the soul, as it is a part of the Cosmic Soul, which is identified as the Goddess Hekate Herself in the important fragments known as Chaldean Oracles.

The One God in Platonism or Creator-God (Demiourgos) is called Nous/Mind in Neoplatonism. He is the One who created the universe, perfect, self-preserved, animated, logical, good. He used the mental world as a model to create the sensible world we live. For the Neoplatonics, He looked inside of Him to create the universe, as there is nothing outside the God. So the world is a copy of the God emanating from him inside him. The world in the field of Mind is eternal as eternity encloses the whole unity and everything is included in the Creator. When that image was transferred in the world here, it existed in time and that makes the world as a moving copy of eternity because all the things that exist here are copies of the things that exist there. Of course those teachings of Plotinos will be found in Plato’s Timaios (37 d).

But, if He used the same model to create the living creatures of the earth, like the birds, the fish, the animals, the humans He would made them immortal and perfect. So, He gave that order to the Gods and Goddesses. From Ouranos and Gaia we have Tethys and Oceanos and from them we have Forkys, Kronos and Rhea. From the latest two we have Zeus, Hera and the other Gods. Those Gods and their children created the mortal creatures on earth and of course they created the mortal part of our soul.

The immortal part has been given to us by the Cosmic Soul, as a light of God, which we carry and this part is our true self. As we read on Eirini’s article on The Hermetic Tablet: “The Cosmic Soul sends its light like glowing to the human souls… Each man has a divine part inside him, the same divine substance of the Cosmic Soul in the same form.” Notice, this is not some kind of new age views, but ancient divine Neoplatonic teachings, well examined with logic and proved in the dialogues of Plato.

The body is just a vehicle, a channel for the soul. The soul is the governor of the body. Let’s see the mortal soul. She has inside:

Though the immortal soul was placed in the head, they put the mortal below the head, so they created the neck as a barrier between those two parts. (Timaios 69 e) The mortal soul was subdivided in two parts. The one over the diaphragm consists of its higher part, the one below the diaphragm consists of its lower part. The division of the soul in three parts is necessary because as we see in Politeia/Country of Plato's the same function cannot tolerate to do or receive different things inside of her for the same matter (Book 4, 436 b). Socrates has analyzed those functions. There is one for learning. One for getting angry and of of desires both sexual and eating ones. 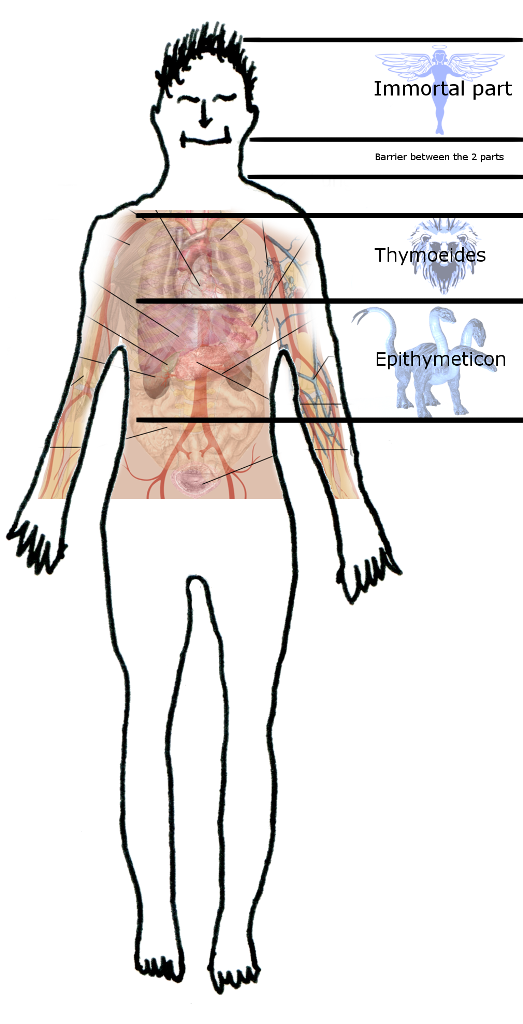 The first part is the thymoeides (θυμοειδές) the one of anger which is placed in the heart and lungs. It consists of courage, passion, the ability to recognize and unfair action. (Timaios 70 b) This is the reason we have our heart beat faster when we get angry or we have passion on something we do or see unfairness on the actions of others or of their motives. The heart and the veins work faster, because of that part.

The second part of the desires looks for food and drinks and similar pleasures of the body ( Timaios 70 e). It is placed between the diaphragm and the navel. In our liver exists the part which is related with divination, oracles and messages from the Gods and Goddesses. This part doesn’t understand reason, but idols, phantoms of the night and is capable if evocation.

As we saw the mortal part and its two parts, we have to add the third part, the logical which is connected with our divine part of the soul. It is expected to have that link because the Cosmic Soul knows everything about the mental and the sensible world. She governs the universe and She is the source of knowledge. In Timaios we read that after the animation of the universe, She made a new beginning of a continuous living in wisdom (36 e). That higher part of the Soul is called Logistikon meaning the logical part.

In 88 b of Timaios we read: "Human nature has two kinds of desires. The food for the body and fronesis/wisdom for the divine part of the soul. The movements (=our choices) of the more powerful part rule (the rest) and increase their own part (the body or the soul).

We see that Plato means the mortal part of the soul on the one side and the immortal on the other. We have to choose in our passing on earth, which part we should cultivate and spread, because we cannot choose to cultivate all of them, but just one. When we cultivate the one, it rules over the others.

On that point we will read Iamblicho’s Exhortation to Philosophy (30), which contains a lot of platonic teachings, as Iamblichos is one of the most important neoplatonic philosophers.

“Inside of use three parts of the soul have been established. The one we think, the one we got angry, the one we desire. It happens, each one to have its own movements, so the part that stays slow, doen’t move towards its movements, it becomes weak and the one that we practice becomes stronger, that’s why we should take care those parts to have harmonious movements among them. Specifically, we should exercise the important part of the soul, which has been given to us by the God, like a daimon, to each of us, to elevate us from the earth to our heavenly relatives… If someone dedicates its time to desires and ambitions and he really fights for those things, then necessarily, his thoughts will become mortal and in any case, as much he can become, a mortal being… because he has cultivated that part of the soul. On the opposite, the one who has dedicated its time in learning things and thinking the truth and he has mainly exercised those parts, he necessarily makes immortal and divine thoughts… he participates in immortality.” In the latest Hermetic Tablet we read “the man when searching for his immortal self, in his soul he can reach the Cosmic World Soul, the divine, as the same glowing of the Cosmic Soul exists in every man.”

Iamblichos characterizes the mortal part of the soul, which is linked with desire as a monster with many forms. He characterizes the other part, of the anger as a lion. If we feed one of those two, we leave the logical part in starvation. It becomes weaker and it is carried away by one of the two monsters. (31) He advices us to make the divine human being we have inside  as the ruler over the multi-headed monster in order to control the types of desires in a calm way and put barriers on the wild types, making friendship with the anger part of the soul. (32)

The last dialogue we will see is Phaidros (246 25 a-b). Plato uses a visual image on the management of the human soul.

“And really hanging our head as a root, from the heaven, where the soul was initially created, the divine power keeps our whole body standing.” –Platon