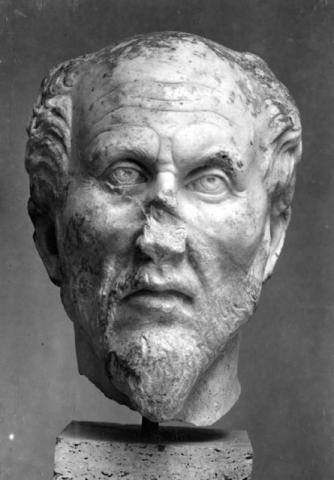 Plotinos is the founder of the current of Neoplatonism. He was born in the Lycopolis of middle Egypt and raised in Alexandria. He started studying philosophy at the age of 28 close to the Alexandrian philosophers as we are informed by Porphyrios.  Plotinos was not satisfied by his teachers and their answers so he was looking for different teachers. One of Plotinos’ friends informed Plotinos about a teacher whose name was Ammonios (Αμμώνιος) and Plotinos had never heard before. When Plotinos heard Ammonios teaching he said: this is the man I was looking for![1] Since then Plotinos became a very devoted student of his teacher.

Wanting to meet the eastern philosophy and religion, Plotinos he went to the army of the king Gordianos (Γορδιανός) but the campaign failed and finally Plotinos arrived in Rome and he stayed there until the end of his life. There he founded a philosophical school where the teaching was made in the form of dialogue. They were reading the works of other philosophers and then they were analyzing them. He became famous very fast and soon he had many students and several people from the elite class. It was formed a  community of people with common interest in studying Plato and Socrates.  Two of his students were Porphyrios and Amelios.

Plotinos had suggested to the king Galleinos, that they should found one city, located at the city of Campania, with the Platonopolis (Πλατωνόπολις). There would stay Plotinos and his followers and they would follow the laws that Plato had suggested. However the advisors of the king convinced him not to allow the establishment of that city and the city never existed[2].

Plotinos was constantly seeking to view the God and unite with Him according to the instructions of Plato. We are informed by Porphyrios that he was close to Plotinos when he came in ecstasies, and according to Porphyrios, Plotinos achieved four times that union. At the end of Plotinos’ life, his health became worse unable to see and speak properly. Plotinos last words were “we have to elevate the divine that exists within us, to the divine that exists in the universe”.

Plotinos work is consisted of 54 treatises which are categorized by his student Porphyrios in six groups and each group contains 9 texts. His work was named Enneads from the greek words ennea (εννέα) which means nine. Porphyry also wrote a biography of his teacher with the title On the Life of Plotinus.