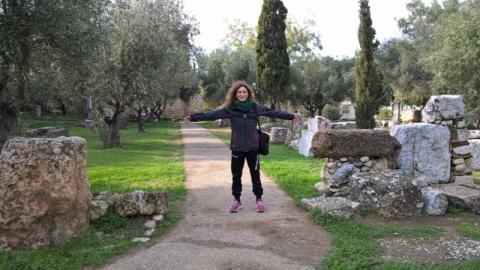 Necropolis means the city of the dead. The archaeological place of Kerameikos in its biggest part is a necropolis, a place associated with death, religious practices, and art. For the first time, I will present info about Hekateion, the temple of Hekate in necropolis, and a Triangular Hiero of an unknown Goddess, standing in three ways crossroads, next to the way of Eleusis.

This sacred place existed before the 6th century b.C. as it is written in a rock the phrase ΗΙΕΡΟΝ ΤΡΙΤΟΠΑΤΡΕΩΝ. It is in the middle of Hiera (=sacred) Odos (the road to Eleusis)Those three fathers are unknown today, but they might be three sacred dead ancestors. They were worshipped in Kerameikos. Tritopatrion had an abaton, thus not everyone could enter. Their worship was connected with the dead and the graves that surround it.

After Tritopatreion there is a mud-brick building. An inscription reveals that it belonged to the family of Alkiviadis. The ashes of his body are in the west side of this building.

An interesting spot is the Hieron which is placed in the east side of the south hill (a very big graveyard). Its shape is triangular. It was built in the 5th century b.C. when in the south hill (which is next to it) much soil was added to make a greater place for the dead. The entrance was from the east and the Goddess that was worshipped inside remains unknown. Hekate maybe? Especially if we connect Her with the triangular hiero of Hekate, which is placed near, in ancient agora! Another clue for Hekate is that this Hiero connects the south hill (graveyard) the Tritopatreion and the Hiera Odos (the sacred way to Eleusis).

Among many sarcophagus and other graves, a large temple and a smaller one existed. The building had a polyedric base. Epitymvia anaglyphs (wall marbles with statues) were found of exquisite beauty. One of them depicts Demetria and Pamphile. They were sisters. Pamphile is the one who sits. An olden anaglyph was found with both of them. 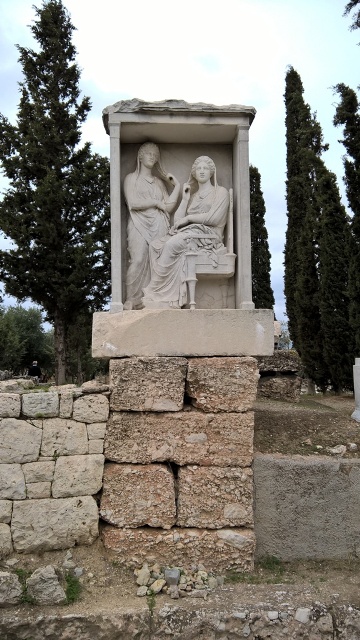 A marble bull is a relief offering to Dionysus from the municipality of Kollytos. Around the wall we see ruins, many of them are there from 338 b.C. because parts of the wall were never fixed. A small temple was there with inscriptions to Dionysios and Persephone (Fersephone). The interesting thing is the written philosophical teaching of the immortality of the soul. "Your body Dionysie is in the earth, but the soul of a common paymaster is immortal. You left your friends, your sisters, and your mother with grief..." Under the bull, his sarcophagus was found. Nowadays it is not in the museum of Kerameikos. Its course remains unknown. Next to the bull, there is another grave of Lysimachides. From the two dogs, only one has been saved and it is impressive. Moreover, another anaglyph is saved with Charon in his boat. We can see both of them at the entrance of the Museum. In Kefisodoros we see three big bases but nothing else has been saved except the gravestones of Nikostrate, Kefisodoros, and Lysistratos.

On the opposite side, the south Anderon graves of the Hellenistic and the roman era exist, thus we see a movement to the south. A big column with three sides of Sosivios from Sounio is in very good condition in the field. On the top seed of poppy exists, a symbol that we see in Eleusis too and it is associated with death and life after death. 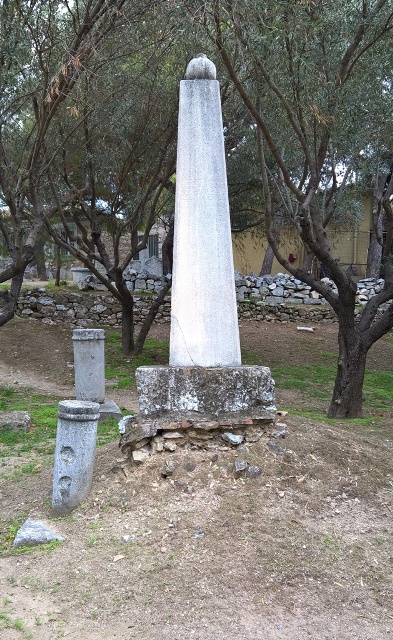 Among all the graves we have read about, in the center of necropolis, from the road of graves to Tritopatreion, to the south hill of old graves and to south anderon, the Temenos or Temple of Hekate, Hekateion as it is known, stands in the middle, suggesting the connection to the Goddess with the dead. Just across the Temple the triangular stele of Sosobios stands proudly to remind us the immortality and the journey of the soul. A woman with a vase of water, called Hydrophoros or hydriaphoros (the one who carries water) was found in a wall stele. It had been created in 4th century b.C. and was placed in the Temple's wall. Hydrophoros is now in the museum and a copy of her has not been placed outdoors. Water had been connected with the dead. In earlier millenia, the dead were buried close to the river of Heridanos. The custom was to put water vases to the graves so that the dead will never get thrusty. So Hydrophoros is a relief to the dead. Another explanation is that Hydriaphoroi were partaking in a pomp for the dead.

The Hekateion was built in roman era on ancient graves. Three wells existed in its place. One close to the south Anderon and one between the graves of Lysimachides and Kefisodoros. The third well was in between the altar and a triple statue of Hekate. A piece of shells surrounds a pedestal in which a sphere of Hekate existed or a stone of her depiction. A small eschara, ritual tool for offerings (burning) were found in the ground. Traces of fire were also there. An eschara we also see in Eleusis. In the south side of the Hekateion, the one we see between the ropes there is a small anathematic stele with a couple approaching an altar and a slave leads a ram to sacrifice.

From this engravement we can understand the identification of Artemis and Hekate that was happening in hellenistic era and now to the roman era too. The epithet Soteira in this place is of great importance, as the Hellenes saw Hekate-Artemis as a mighty Goddess who could erase any difficulty, even death, a Goddess who could give hope in the city of the dead. The stele and the engravement stone were placed in the Hekataion in later times.

If you see carefully the photo you will notice a piece of oilcloth in the ground close to the rock. I asked the guardians in the museum about Hekate. They didn't know Her! Then I asked to speak with an archaeologist or someone who could give me some basic information. Miss Alexandra explained to me that this oilcloth in the soil was there due to an excavation that was never finished and she didn't know when it will start again. They found an hygromanteion (place in which hydromancy was practiced) behind the rock. This finding connects more Hekate with oracles and necromancy. She told us that this research was in progress and nothing has been published yet. I want to make a strong notice that the Hekateion has not a sign or a tablet. You see it but you cannot undestand what it is. I searched the books that were sold by the museum. The new books didn't had a single reference to Hekate, neither to the Temple of Hekate or the Triangle. An old book written by Ursula Knigge published by the Deutsches Archaologisches Institut Athen in 1990 had a paragraph and a map with it. German archaological institute has offered a lot with its excavations in Kerameikos.

I started searching online about this excavation. In 1890 mr. Kyriakos Mylonas excavated the Hekateion. He found a triangular basis in which a statue should be placed and he associated the triangle with Hekate, as She was depicted with three bodies (Trimorfis). Between the triple statue and the altar of Hekate, a marble omphalos (the well) was found, covered by a marble slab. From then until 2012 noone had the idea to remove the cap and see what was under. In 2012 the german archaeological institute using a crane, it removed the marble and found the well. 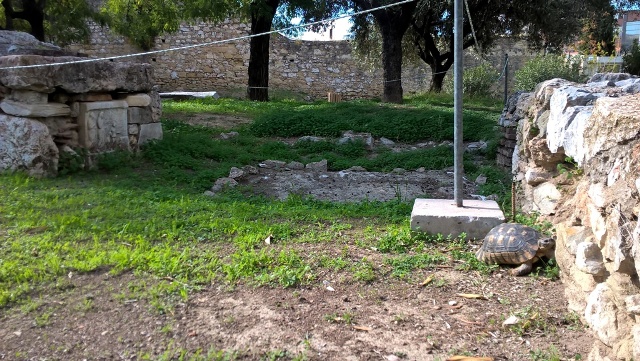 Under the oilcloth there is the well-omphalos-hygromanteion of Apollo 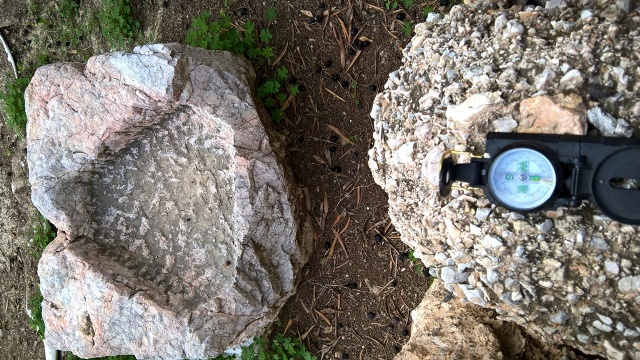 The base of the statue of Hekate. As you see Hekateion is perfectly aligned with the points of horizon.

In 2015 dr. Jutta Stroszeck of the german archaeological institute started an excavation on Hekateion. More specifically an inverted lykethos (vase associated with the dead) was inside of Hekateion sealing something in the ground. That was a big hole of an old well of nine meters, 65 cm in diameter. The one who we mention before. It was used for hygromanteia, divination through the reflection of magnetic fluids to the surface of the water. As I have written in a previous article, methods of evocation were gradually evolved from physical evocation to using mediums like water or later, the dark mirror. In the inner stones of the well it was written deosil: «ΕΛΘΕ ΜΟΙ Ω ΠΑΙΑΝ ΦΕΡΩΝ ΤΟ ΜΑΝΤΕΙΟΝ ΑΛΗΘΕC», which means "come to me oh paian, who brings the true oracle". Paian means the one who banishes illness and sorrow. It is related with Asclepius and Apollo and Helios. There is an anaglyph with Asclepius and Hekate in Athens, though it is also hidden. Helios is a God who acts a a counterpart of Selene-Hekate. Paian here is associated with divination, thus Apollo is the one we are looking for, as he is the God of oracles and his sister is Artemis. Thus, this oracle in the Temenos of Hekate is the first one that it had been found in Athens!

You can read more about the excavation of the well in the website of German Archaeological Institute.

I saw earlier images of the Hekateion and there are some disapointing concusions. The circular cap that was on top of omphalos, as well as the surrounding rectangular base is not in its place today! 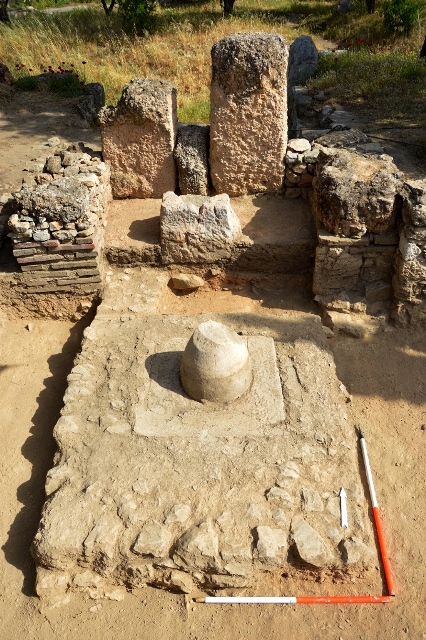 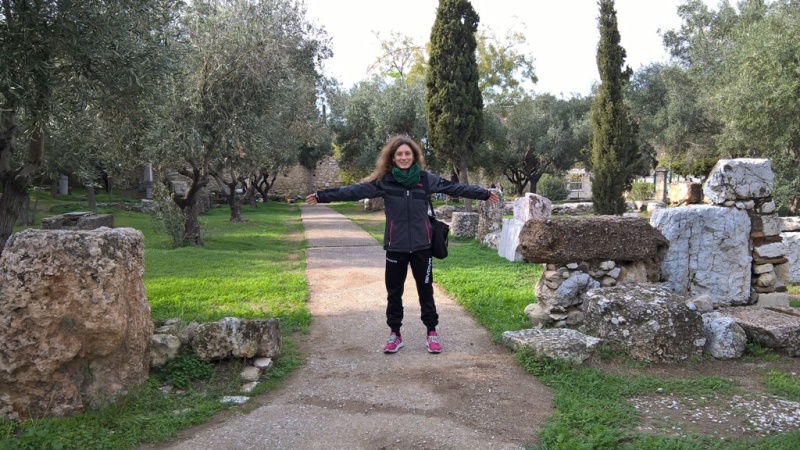 Eirini in the entrance of Hekateion 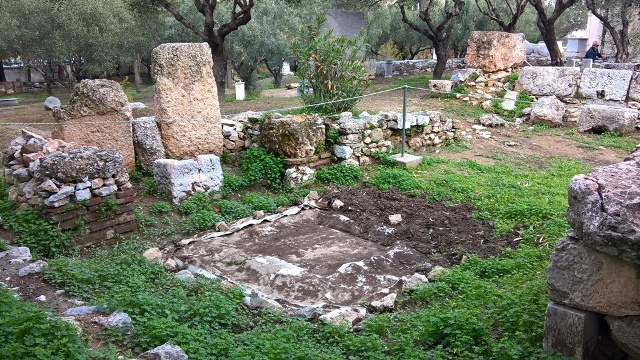 This photo is taken 2 weeks after the previous photos. It seems that the archaeologists dig the soil. 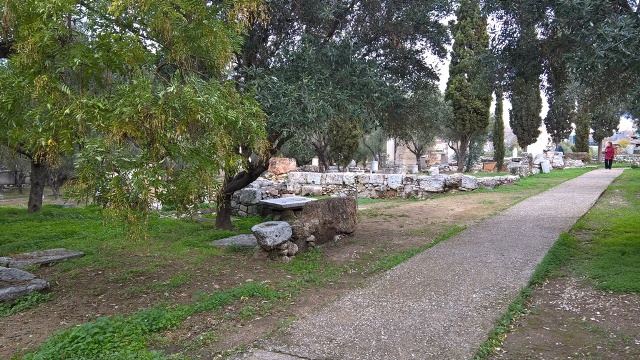 Photo of Hekateion from the west end towards the east. 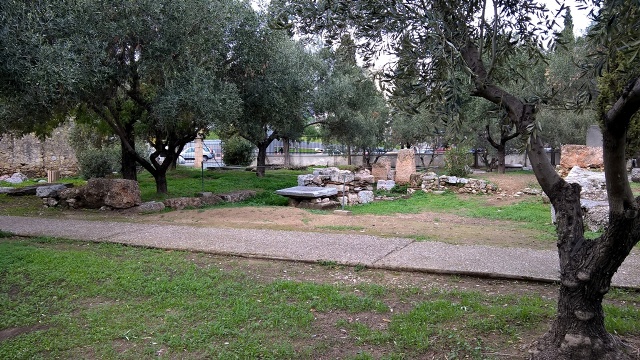 See photographs from the excavation of the hygromanteion from the History blog! More photos