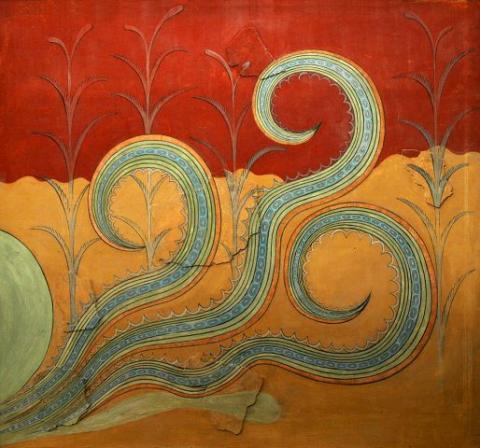 Ide is a mountain in Crete. Ide is also a mountain of Troy, the later Frygia of Asia Minor. From those mountains some very clever creatures were born, Idaioi Daktyloi (Ιδαίοι Δάκτυλοι), means fingers of Ide.

The epic poet Phorokides at 6th centrury b.C. wrote a poem about three Witches from Ide. Their names were:

They worked with a strong metal, called black iron. They made tools from iron. According to the Pario Chroniko, this discovery were made at 1432 b.C.

Sophocles the poet wrote that Daktyli were 10 brothers.

Another tradition from Mylitos adds to the first three another two:

Dactyloi were Witches and blacksmiths in the same time. They worked at the mountains Ide. They knew effective spells and from their knowledge they created the mysteries of Samothrace, in which they travelled to taught their skills to anyone who was appropriate. They had mysteries in Crete. Pythagoras was initiated in those mysteries. Their main deity was Zeus and maybe Rhea, the mother of the Gods. They also taught music to people. Dactyloi were well known also for the discovery of the Ephesian Letters, which were written in the statue of Artemis in Ephesos. Those voces magicaes were the most famous in ancient hellenic world.

Dactyloi are also the founders of Olympic games (well the word game is not appropriate, but the english language is so poor). According to tradition five brothers travelled to Olympia and they bet who could run faster. The winner got a wreath of an olive branch (kotynos).

Idaioi Dactyli were one of the first association of a closed job. They were combining religious mysteries with metal workings. So, they were blacksmiths and priests forming a religious cult and protecting the secrets of their work. According to archaeological evidence in Crete, ruins of old blacksmiths were found in the mountain Ide, as well as pieces of iron weapons and iron balls. All the above were found in caves of the mountain.