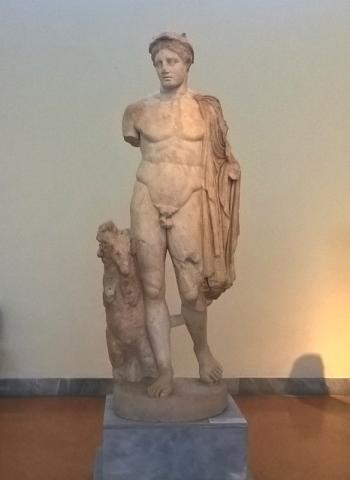 Hermes, is a God who works well with Hekate. Looking back at the ancient hellenic magick, Hermes and Hecate make a good couple. Let's see who he is...

The name “Hermes” comes from the word “eiro” (είρω) which means “speak, talk”. He is son of Zeus and Maia, one of the seven Pleiades, daughter of Atlas and Pleiones. Just like Zeus, Hermes was born in a cave, in Kyllene mountain. As a child he created from a tortoise shell a music instrument (lyra).

Hermes is the messenger of the gods and he conveys the will and messages of the gods to the mortals or other gods. As an emblem of the function as messenger, he was carrying the Kerykeion (decrypting... it is the dna). In his quality as preacher he was gifted with exceptional memory and a very loud voice. He transmits peace because logos (saying) brings peace. He is psychopompos because the souls of the dead people follow him by watching his Kerykeion down to Hades. When his duties were done he was returning to Olympus mountain. He is also considered to have given to people the laws and the rules of interchange and for this he is protector of commerce.

His protection extended to travelers, foot passengers on paths and hunters. He was overseeing them not to deceive from the their proper direction. Hermes was also responsible for people's health and he taught them how to use specific herbs. By moving among all realms sky, earth and underworld he holds a great position to predict the future.

The most important power of his is that which present him as a factor of fertility principle. The main symbols about it is the phallus and Aries to which they added sometimes the calf and the goat.

Statues of Hermes could found everywhere; on the streets, in the houses, in temples, in the wilderness, because logos is necessary everywhere and leads every action. There were also statues in the palaestras and in the gyms because logos is power. Statues as Hermes thief were created because logos stills the truth sometimes.

They were offering to him milk and honey for the sweetness of the tongue and wine with water as heavenly and chthonic god at the same time. During the Anthesteria celebration they were offering to him pots full of cooked vegetables. They were putting fruits on the roods from which foot passengers were eating. These fruits took the name “ermea” (έρμαια). Sacred to Hermes were all the pets and all the new-born. Among birds sacred to him is finch, among fish is boce (γόπα), among wild animals the lion, the deer and the wild pig, among herbs the cinquefoil, the poppy and the myrtle and among trees the fig.

Celebration for Hermes was the “Hermaia” during which young people were taking part in lampadedromia (running or walking with torches).

As we can see Hermes has some qualities in common with Hekate as both deities have duties in the underworld sharing the epithet chthonios-chthonia. They both guide the souls of the dead and protect them. In addition they both are associated with the return of Persephone to her mother, Demetra. Hermes and Hekate have also common epithets that indicate the connection between them: enodios=on the roads (ενόδιος), hegemonios=leader (ηγεμόνιος), propylaios (προπυλαίος), sokos=savior (σώκος), trikefalos=with three heads (τρικέφαλος), faesforos=bringer of light (φαεσφόρος), chthonios=earthly one (χθόνιος). Hermes also has the epithet kynokefalos=having the head of a dog showing the relationship with the dogs as Hekate does. His epithet ''trikefalos” was given to him because people were setting his three or four-headed statue on roads where three or four roods meet and one head was facing each road the same as with Hekate's statues.