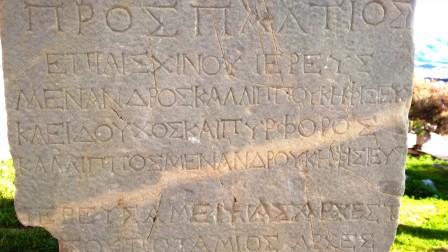 Ancient and modern Hellenic: two different languages or not?

People with these views have actually read studies, papers or opinions which are written by people who have not the Hellenic as their mother language. But who can blame them if only these opinions are available for those who are interested in learning more about Hellenic? These researchers never actually saw the point of view of the people who are well educated and speak the Hellenic language as their mother language. Nor do they have searched the point of view of Hellas as a country about this matter. For further clarification and understanding, we need to look at the education system of the Hellenes. What a better way to find out about the correlations of the ancient and modern language other than seeing the perspective of those who speak the language as their mother language, are raised in Hellas and are educated accordingly. Let's see what the Hellenic country believes and what the young students receive as their basic education from school.

Well, they don't speak the language as you will see it in the ancient text. They speak a simpler form. We have the same Hellenic language from antiquity until today but today it is simpler using fewer words and less complicated syntax. A simpler form does not mean that the two forms of the language are not connected nor does it mean that they are alien to each other nor that the one who understands the one form can't understand the other. We are talking about a continuation of the same language into a simpler form. If a modern Hellene with no studies reads any kind of ancient text he can very well tell you what is the subject of the text but he will lack some words which we no longer use. He can read it and he can understand its wider meaning but he cannot understand the exact meaning. The understanding of the exact meaning word to word needs training.

Do modern Hellenes come in touch with the older form of their language which is the Ancient Hellenic?

What do the children learn in the subject of the ancient Hellenic language at school in Hellas?

In the modern language, we no longer use some words. At school, we learn as much of these words we can and we are encouraged to use them in our everyday life.

Both modern and ancient languages have 5 cases. In the modern Hellenic language, before the age of 12 years old, we are introduced to 4 out of 5 cases, while we also speak the fifth case. In the ancient Hellenic language, at the age of 12, we are finally introduced to the fifth case. Before 12 we are too young to learn all the subtle mechanisms of the language and we gradually learn them from the subject of the ancient Hellenic. We do not learn a new language, we extend our knowledge learning and adding more details.

In the ancient, we have 3 numbers that express count distinctions; singular, plural and dual. Today, in the modern we are introduced to 2; singular and plural while the dual is included in the plural. After our 12's we are introduced to the third number at school, we are taught them separately.

The method of learning the mechanisms of the ancient language include the study of the ancient Hellenic text itself from the prototype. We study excerpts from Plato, Aristotle, Xenophon, Lykourgos, Aisopos, Plutarch, Ailianos, Apollodorus, Pausanias, Lucian, Herodotus, Thucydides, Andokides, Euripides, Aeschylus, Aristophanes, Sophocles, Poluvios, Herakleitos, Empedocles, Strabo, Diogenes Laertius, Arrianos and Athenaios. We also study the works of Homer. In any case, it is of great importance how much time each students spents with those lessons of language at home and how good student he is. A medium-grade student will not remember much (if not anything) when he will be 25 years old on the other side, a good student who continues to study after school, he will develop a good relationship with the language.

Let’s take a short look at the schoolbooks

The greater language was the ancient Hellenic language which was spoken for many centuries and was used by great writers. Because it never stopped to be spoken, it passed from many stages until it formed the modern Hellenic language.

"With your language, you make apparent your happiness, your sadness, and your thoughts. It is a language full of power and life. It is the same language which is spoken by our fathers and by those who had lived before; our ancestors. The body of the language, however, stayed the same, ageless and alive because ageless and alive are its people who spoke it in the past and also speaks it at the present. This language as in the old years, so today was and is alive. You will learn to think correctly because someone is learning to think when he is learning his language. Language and thought are born together. The more you know it the more you will feel that you hold a treasure".

"Most of the words of our language are ancient. They are spoken by our people from the ancient times until today without stop and they stayed unchanged as they were thousands of years ago or they changed a little. In our language, there are words that are lost from the speech for many centuries and they were re-used again by the scholars of our nation the last two centuries."

"A constant link was pursued between ancient and modern Hellenic language at all levels of lexical, morphological and syntactic structures so that students gradually become aware that the modern Hellenic has its roots in the ancient Hellenic and it is its continuity and evolution, and achieve a deeper knowledge of the language and widening their linguistic code."

In the next edition of the same book, it was also included: "It is remarkable that the Hellenic language is a unique example of a language with uninterrupted historical continuity. So, we can speak of a single Hellenic language from antiquity to the present day."

"(the aim is to) engage in language (not necessarily professionally) and gain the privilege that many people would like to have from all over the world: to understand ancient Greek texts by reading them from the prototype".

All the above questions that create so much research and debate abroad, here in Hellas, you can see that they can very well be answered by a child who goes to school at the age of 13.