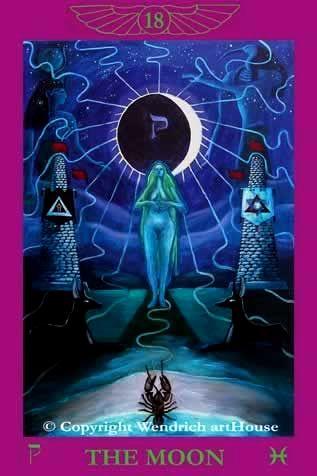 The Moon card is the 18th Key of the Tarot. The energy of the Moon card is moving from Netzach to Malkuth, the 29th path of Qoph.The moon increases on the right side of mercy, having 32 rays, as the paths of wisdom (22 paths + 10 sephiroth). The two black dogs are there to guide the initiate as they are sacred animals to the Goddess Hekate. Why the sea water is not clear? Due to the "pollution" of the path, the limitations, the waters are not clear as there are the waters of Chesed and that's why a crayfish is coming out of the sea. The crayfish is the sign of cancer (moon) but also represents the Kephera (sun). As we read in Waite's book, it represents the low form of our conciousness and it seeks the path of light, which we can seee it but it has no ending. The moon here is an ally of the initiate as it lends its light and it will increase in brightness as it is on the phase of waxing.

The path of Qoph in Altziluth has the color of magenta, thus we see the borders painted in that color. The path is connected with sea creatures and waters, so the representation of crayfish and the sea water (of the collective unconsious) is normal. Qoph is the back of the head, thus the subconsious mind, which is also very fit with the Moon card. The path is connected with limitations inside of us, thus its characteristics are illusion, hallucination, delutional dreams, fantasies, imaginatory scenes. The traditional symbolism of the path is two fish swimming on the opossite direction, this makes it as a representation of the pisces zodiac, another water association.

As we saw there is a card with water energy, and the moon rules this energy. The female figure on the center is making the sign of water triangle with her hands. Again, this is another association with the subconcious mind. On the towers and next to them there are four yods, one for each world. They are red, a color which represents the spiritual energy. They are here to help the initiate on his path. In the book of Wendrichs we read that the yods also represent the influence of Archangels Metatron and Sandalphon, who represent the higher and the lowers Shekinahs and those work it is to bring them together. On the right back we see Thoth and on the left back Hathor. Both of them are associated with the Moon. The dogs have high ears, which may be symbols of Anubis. Anubis and Hekate are related with the Underworld and they are good friends.

If the lower form of the initiate, which comes out of the sea is impure, the dogs will stop it from moving to the path. His illusions will stop him from further progress. The two high towers represent darkness and light, and they are the limits of human perception. He can move forward if he understands those limits, especially those who prevent him from moving, due to ill fantasies. Let's see the other two paths, of Tau (Yesod to Malkuth) and Shin (Hod to Malkuth). The path of Shin shows legal limitations, and social patterns and the path of Tau shows time limitations. Those three obstacles of mind should be controlled by the initiate if he wants to move on his path, beyond the towers.

The central figure of the card has long hair, she sees upwards and is totally naked. She stands on the path to speak to the initiate. This figure is a messenger of the Goddess Hekate, who is the Goddess of Mysteries and teaching to people how to overcome obstacles. The figure is here to help the initiate pass the towers. If we look the scene from the beginning, the lower self emerges from the sea of unconscious, stops or passes the two dogs and hears the Goddess. The purpose is to find enlightenment and pass this test. To endure and not let the fantasies rule his mind. The path is full of watery elements and illusions, but the initiate should handle those mind games and move. The path can be very harsh if those elements could not be controlled. Animal instrincts, passions and our worst self could be revealed, but the Goddess is there to punish quickly the uncontrolled mind.

The card has the side of illusions. We see that without proper training, people today, lose themselves and their purpose in their quest of learning Witchcraft, due tho those implications, the obstacles of the path of Qoph. The Moon card shows the dangers of non systematic work of low devotion. Those limitations act as a "threshold of life" or as a "gate of resurrection" as Aleister Crowley charecterizes the path. Hekate stands at the threshold and Hekate likes changers for the good of the person who is calling for them. But those changes hurt sometimes and this should be expected. People who work diligently have nothing to fear in their path. A similar card, The High Priestess shows the wisdom of the practitioner who is moving to the path of self transformation. Those two cards have similar energies but they also act as a warning to newcomers in magick.

In the end, the Goddess has sent a messenger to guide the initiate who honestly wants to pass the towers and walk on the path of Qoph. Hekate will help the practitioner take the right decision if his heart is true and pure, to overcome the illusions and the mind obstacles transforming his lower aspects which lie in the subconscious mind. Hekate as the Goddess of magick and mysteries will hold the torches high to the right direction and the dogs will be more than happy to escort the true initiate. As Witchcraft today has open its secrecy to newcomers and neophytes, anyone can learn and practice having some good books, tools and a room. The Goddess of Witchcraft is not going to help or approve further progress to people who just want to have another hobby or to people who want to feed their ego or make a fashion statement. Also, playing with altering consciousness through visualization, meditation and breathing techniques is not harmless if the practitioner is nto performing the technique right or systematically. If someone opens a gate, he should be ready to accept the challenge and pass through the gate or at least be in the position of closing the gate. Another thing we see today, and it is not new at all, is spiritism, chanelling and oracles obtained with various techniques. Those practices should be taken accordingly, filtering everything and not let the mind limitations to stop the practitioner from seeing the truth or developing addictions.

Closing the article, as some people may have been confused with the divinatory meanings of the card it represents important decisions, guidance in a difficult situation (crossroads), deception, trap, illusion, disappointment, falisty, errors. If the surrounding cards are possitive, it may show evolution, spiritual development, overcoming traps and obstacles.