Hekate in the GD Temple Tarot 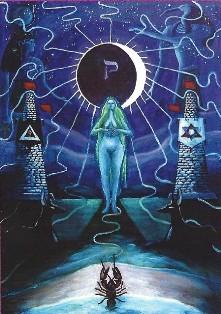 The Golden Dawn Temple Tarot is one of a few Golden Dawn Tarot decks that are available for the magickal and tarot community. It is a pure representative of the english school of tarot, the most famous school. This deck is the most recent in its category and maybe the most vivid one. It has been created by Nicola and Harry Wendrich and Nick Farrell, extremelly important personalities. It is available in the Wendrich Art House website (http://www.wendricharthouse.com/shop_gdttd1.htm#b1). The cards have been drawn after esoteric work like meditation, astral projection and total understanding of the Book T of the Golden Dawn Hermetic Tradition.

My main interest in this article is the Moon card (number 18) from the Triumps and we will see why.

The Meaning Of The Card

The moon card in the Rider-Waite-Smith deck represents illusions, deception, falsity, not knowing the whole truth, secrets, a secret relationship. As an advice card it tells the querent to follow his instincts, his intuition. The hebrew letter of this card is Qoph. The path is the ninteteenth between malkuth and netzach. The moon is close to the pillar of mercy. It has all phases and yods are falling down the earth, thus the divine energy is descending, the energy of magick. This energy is connected with the back side of the head, the subconscious mind. This alter state of consciousness is an important fact in practicing magick. The Golden Dawn system starts all rituals with a meditation rite, the fourfold breath and the body excersise to make the body tense-free.

In the Golden Dawn Ritual Tarot of Sandra Tabatha and Chic Cicero, the eighteenth card shows two jackals, symbols of Anubis, the gate guard. The two towers have Anubis drawn on their walls. The path symbolises the way of the heavenly bodies. The crayfish is connected with the cancer, thus the moon but also with a side of Horus, Kephera or Khephra. In the Ciceros' deck four yods are falling from the moon, the four worlds, four times a help for the initiate to walk the difficult path. 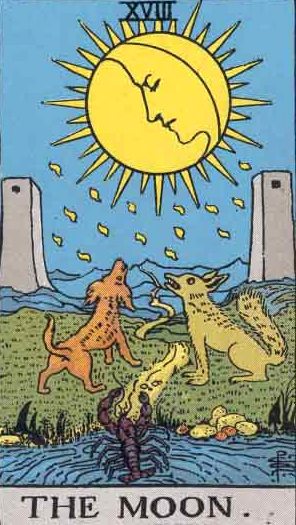 If you read my blog, you will remember the series of articles "searching Hekate". In the Tarot section, I had related Hekate with the Moon Card, because Hekate can help us overcome our animal nature and become initiates of the Mysteries, to become spiritual persons. I work with the Golden Dawn Ritual Tarot of the Ciceros. I am a fan of their work and yeah I admire them. The book and the deck is based in the Book T of the Golden Dawn magickal tradition. I have seen a video review of the Golden Dawn Temple Tarot, but I didn't want to change my deck. Anyway, one day I had an idea to draw Hekate in the Moon card, based in the Temple Tarot deck of the Wendrich Art House. The result was very good. I didn't knew why Hekate wanted me to do this work. After meditating with the Temple Tarot, I found the energies, the drawings and the colors extremely powerful.

I sent an email to order the deck and Nicola Wendrich responded. I shared with her my story with Hekate and the Moon card and he told me a very interesting story. 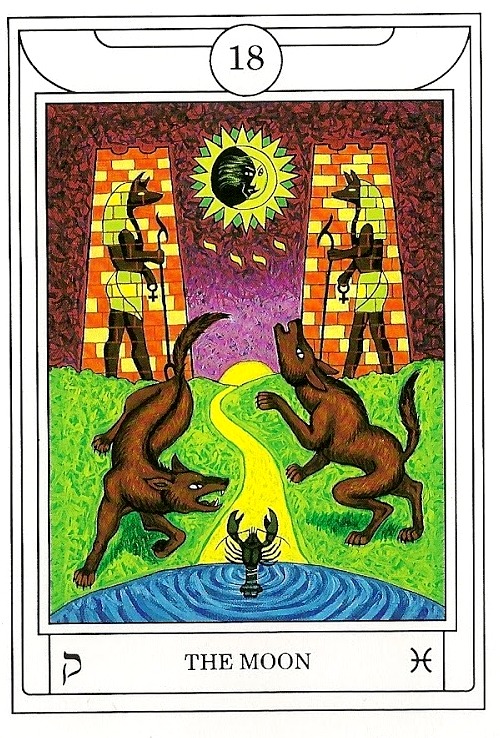 Nicola told me that after a meditation session they saw the figure we see on the Moon card of the deck talking to them that this card should have a positive meaning. Nick Farrell then, made a thought to relate this card with the Moon Luminous Goddess Hekate. Hekate as a Torchbearing Goddess will give positive vibrations to the card and with Her torches will guide the initiate in the path of the Mysteries. In fact Hekate has been invoked for this role from the Eleusinean Mysteries, guiding the initiates to the telesterion, the room of the ritual.

Hekate is the Goddess of Magick. She taught herbalism to Hellenes and Magick. The Moon card has been connected with magick, intuition, psychic powers etc. In Wicca and ancient plus medieval European traditions of Witchcraft the moon was an important fact to have positive results. Hekate has been connected with the Goddess of the Moon, Selene. In fact in the Hellenistic era, Selene, Artemis, Persephone and Hekate were called with the same name as the same Goddess. The dogs of the Moon card are related also with Hekate, because they were Her sacred animals! So again, the relation between magick, Hekate and the moon is a successful one.

Nicola told me that the deck has reached its target. They have created a deck with information and inspiration drawn by the spirit world for people who work with magick. As Hekate found a way to make me notice this deck more, the spirit, the Goddess brought me to the deck, so the target has been reached. I am waiting to receive the deck and work with it to write a review. Concerning the Golden Dawn Ritual Tarot of the Ciceros, I consider it one of the best decks I have and I work with it. 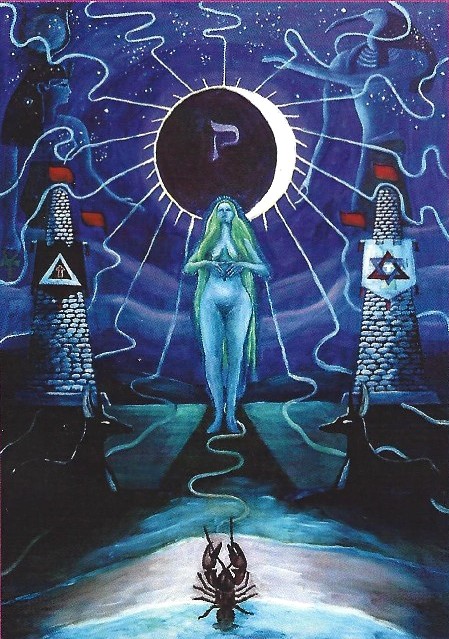 According to the new correlation with Hekate and the 18th card of the Major Arcana, the card shows guidance with psychic methods and keys, important decisions (crossroads are associated with Hekate too), depression and deception. So, as we see, the main meaning of the card remains the same if you are following a good solid tarot book and school, but if you are a follower of the New Age, please see this card as a more positive one.