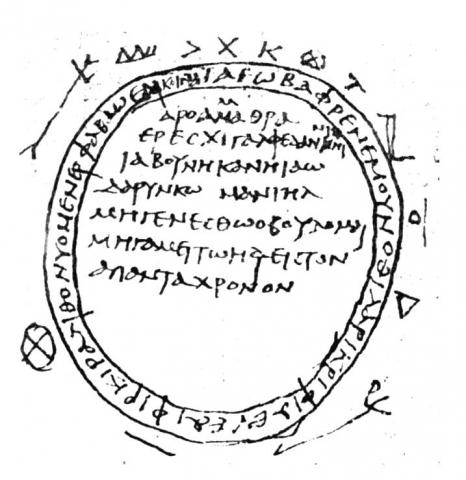 Katadesmoi in plural, katadesmos in singular are an ancient hellenic magickal technique. It requires a lead tablet and a nail. The desired purpose is simply written in the lead and then it is fold in half and with a nail on the center it is bound. The instructions of how to make a lead tablet efficently for magickal uses could be found in ancient papyri and ancient tablets.

There are some basic structures of creating a binding, but in this article I am just going to provide the instructions from the PGM V 304 - 369 This papyros is stored in the Museum of London, not in Hellas. For the following katadesmos a papyros is needed, plaster, calamus pen, myrrh and threads/cords. It can also be done with lead. If you have the PGM in translation edited by Hans Dieter Betz open at page 106

The following instructions are presented for encyclopaedic reasons.

The appropriate phase of the moon is the waning.

Take an ecclesiastic papyros or a lead tablet and a big iron ring. Place the ring over the papyros and sketch its shape in both sides. Pour myrrh inside the circle or make an ink with myrrh. Inside write the following voces magicae:

Draw some magickal symbols too, as they are shown in the image.

Wrap the papyros with cords well until it is not visible. As you do that say:

I bind totally the (name) by the God (name). He could not resist, not say differently from me, not look at me on the face directly. He is in my power as long as this tablet is buried here. I bind totally his spirit, his heart, his emotions, his actions to be immobilized in front of all people.

If the person you want to bind is a woman: I bind totally the (name) by the God (name). She could not be fucked with (name) or (name). She is in my power as long as this tablet is buried here. I bind totally her spirit, her heart, her emotions, her actions to be immobilized in front of all people.

Take the papyros in the grave of someone who died before its time (see the necromantic practices article). Dig four fingers in depth and put it in saying:

Nekydaimon I am giving you the (name) (not) to make (purpose). Another method is to find and unused well and throw it, by saying the same charm.

Bury the hole and leave.

If you use a lead tablet, put the ring in the middle and fold the lead tablet. Cover with plaster, so that nobody will understand what is it. Now, in the back write the rectangular formula:

Technical and Scientific Analysis of the Curse Tablet