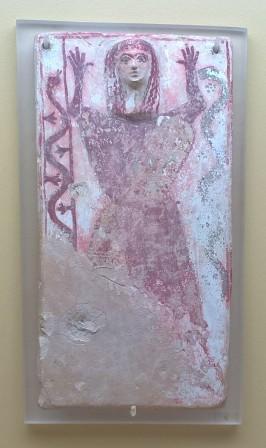 A plaque of the 7th century B.C. depicting a chthonian goddess with snakes was found in Ancient Agora in Hellas. Her characteristics fit to Hekate while similar plaques were found in Eleusis. Considering Hekate's involvement in the Eleusinian Mysteries making a strong connection with the most important religious centre of that time it is quite possible to be Hekate.

The ancient Hellenes (Greeks) kept depictions of the gods such as statues or plaques in their houses, temples and other sacred or common places as representations of gods’ energy and existence to protect them and bless them; they placed statuettes in roads, graves, temples, squares etc. Such ideas lingered long and sustained a craft that gradually turned to religious art that was preserved until today, passing through many kinds, styles, forms and expressions.

The goddess stands between two beneficent snakes, blessing her worshippers. In this plaque the figure is considered to be a goddess rather than an odorant because she forms a gesture which is one of epiphany. Ploutarch and Platon use this word to describe something that becomes visible, real. In the case of the plaque it is a moment that the Goddess appeared to her followers in the natural world and they know that this event was caused by the deity. This plaque shows an old chthonic goddess.

The head is in relief and can only be noticed from the sides. The head is in a triangle shape with big eyes and nose. The hair has curls and fall in the front of each side. Small curls cover the forehead. In upper corners there are holes for suspension. The surface from the lower left part of the plaque is lost while the rest is partly preserved. The painting is on fired clay. Over a white ground, it is painted in deep brownish-red color with accessory of yellow and blue; a three-color polychromy. The reason for the mixture of painting must lie in the nature of the icon (Eva T. H. Brann, Agora). Conclusively the style of the figure is Daedalic and it is dated in the 7th century BC.

The term "Daedalic" is used by archaeology to describe a specific style which was developed during the 7th century B.C. The daedalic style is widespread in Hellas and its characteristics consist of compressed side elevation and the face in full relief. The hair fall forth and back with curls and sometimes there is a row of curls over the forehead. The dress of the females is simple with no foldings. The waist is narrow and there is a belt. Many places in Hellas were making sculptures of the Daedalic style.

The plaque was discarded from some shrine on the north slope of the Areopagus, in Athens, together with other objects such as kantharoi. Kantharoi have crude standard Middle Protoattic ornament and the shape shows to have been devoted to ceremonial use. A similar votive deposit was found on the slopes below the Eleusinion in Athens and another beneath the north central part of the Agora. Some, perhaps all, of these deposits may derive from cults of the dead established in connection with the early tombs in the area. Very similar votives come from Eleusis. The figure of the plaque has been connected with the famous Potnia Theron but her name is unknown.The special technique of polychromy and head in relief was also found in plaques of Eleusis. Hekate is linked with Eleusis as this place was one of the most significant religious centers celebrating the Eleusinian mysteries along with Demeter, Hekate and Persephone.

Association with other Goddesses

On the first glance the figure of the plaque is a woman surrounded by snakes. This kind of representation is supported by Potnia Theron. Potnia Theron (Ἡ Πότνια Θηρῶν = The Mistress of the Animals) is a term used by Homer in Iliad. She protects the fauna and flora of the earth. In her representations she usually holds animals in her hands. Homer by using the term “Potnia Theron” is referred to the Goddess Artemis:

“But his sister railed at him hotly, even the mistress of the wild beasts (Potnia Theron), Artemis of the wild wood (Agrotera), and spake a word of reviling: “Lo, thou fleest, thou god that workest afar, and to Poseidon hast thou utterly yielded the victory, and given him glory for naught! Fool, why bearest thou a bow thus worthless as wind?”

Artemis holds the qualities of the moon (selene) and she also had the name Hekate (=distant, far). She is holding bow and arrows and close to her there are deers and dogs. Hekate also appears with deer, bow and arrow in a coin found in Ancient Agora plus the moon qualities. A great part of Artemis’ power arises from her role as goddess of nature like Potnia Theron. Hekate also appears with these symbolisms and qualities and often people confuse these two from the fact they both hold torches and have animals around them. Over the years Potnia Theron has become an unofficial generic term for any female associated with animals.

One analogous Goddess is the Snake Goddess whose found statues by A. Evans date to 1600 BC. She survives through two statues on Minoan art. On the first statue, which is larger than the other one, the snakes are crawling over her arms while the smaller statue holds two snakes, one in each hand. Both Minoan statues indicate the connection with Potnia Theron in religious theme and qualities as the chthonic form due to her attribute of the snake, is one of the aspects of Potnia Theron.

Snakes were associated with Hekate as Sophocles describes in his work Root-Cutters:

O Sun our lord and sacred fire The spear of Hekate Enodia (=on the road) Who carries as she attends her mistress in the sky And as she inhabits the sacred crossroads of the earth Crowned with oak leaves and the coils of wild serpents.

Also in Argonautica of Orpheus the association with the serpents:

Hecate daughter of Tartarus. From her left shoulder leapt a horse with a long mane. On her right shoulder there could be seen a dog with a maddened face. In The middle a wild snake. In her hand she held a well-hilted sword.

Summing up the above information there is a connection among Potnia Theron – Artemis – Snake Goddess – Hekate, all of them sharing the same qualities. It is possible that the female figure on plaque could be Hekate. By making the connection with the ritual tools that were found close to the plaque and Hekate as the goddess of magick plus the link to the similar sculpture style from Eleusis. Hekate was one of the most well-known Goddesses in Athens. Taking into consideration Aristophanes’ words in the work Wasps Hekate was in every house in Athens:

Philocleon to himself. You see, the oracles are coming true; I have heard it foretold, that one day the Athenians would dispense justice in their own houses, that each citizen would have himself a little tribunal constructed in his porch similar to the altars of Hecate, that are everywhere before every door.