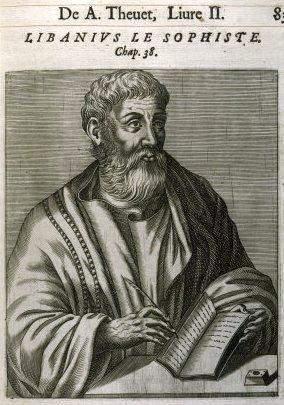 Livanios is a Hellenic philosopher born in the Hellenic city Antiocheia of Syria in 314 a.C. His family was local and rich and his relatives served the state from various positions of power, like being members of the parliament. When he was 11 he lost his father. At the age of 15 he studied under Zenovios and Oulpianus. When he was 20 he got stuck by thunder and this caused him nerve problems for the rest of his life. He came to Athens to study under Diophantos. When he was 25 he became a professor in Constantinoupolis and he established a rhetoric school. He left and went to Nikaia. Emperor Julianus was one of his students. He returned to Constantinople to teach and then he returned to his homeland.Christian fathers like Basileios the Great, Gregorios Nanziazenos and Ioannes Chrysostomos were his students.

His health was fragile and things were getting worse. He has headaches, bad vision, he couldn't stand the view of blood, etc. He never gave up and he didn't react badly under any circumstances. Remember, he lived during a period when Christians started to hunt the followers of the Hellenic religion.

Livanios left us some of his speeches. We have 64 but the best of them were written when Julianus/Ioulianos was the emperor and when he was killed, he fell into depression. Byzantine emperors honored Livanios and they mention him in their epistles/letters. Livanions mentions most of the ancient writers and he wanted to become the next Demosthenes.

This is the 11th speech we have from Livanios. It is a praise speech for his city, Antiocheia of Syria, which was spoken at the Olympic Games of 360 a.C. When someone reads this text, he will want to go back in time to Antiocheia of the 4th-century a.C. It's an easy-to-read text and I recommend it to all of my readers. It was very famous in the 17th century in France.

Livanios starts by explaining how Argeioi came and found the city. Then Kretes arrived and some descendants of Hercules along with some Heleioi. People from Crete and Cyprus came, even from Athens. The city started to grow and become bigger and bigger. Persians, Hellenes, and Romans who came to conquer the city, all behaved politely to Antiocheia. Then, he mentions a lot of incidents of how Gods and Goddesses stayed in Antioncheia and this is the most interesting part for us. There are several mentions of the fertility of the land, the climate, agriculture, and the exchange of products. Another virtue of the town is how many people from different areas of Hellas come to study in Antiocheia, especially rhetorics. In that, we see several mentions of the parliament and how the politicians helped the growth and the value of the city.

Livanios states that the land of Antiocheia is perfect. The seasons change smoothly and thus the fruits and the seeds don't suffer. The fields are easy to cultivate with different kinds of plants.  He attributes this blessing to Demeter. There are great grapes, which he attributes to Dionysos. He does the same thing with olive trees and Athena. Sheep and goats are many in the city. Rivers help with the cultivation and transportation of products. Each season is pleasurable for the land. The land is so fertile that when the citizens of Argos came, searching for Ios, they decided to stop their journey and stay forever founding a new city. People from all over Hellas, who came here appeared the same behavior.

One other reason for the growth of the city is that it was a mix of the best Hellenic genres and that they kept it that way even if around them there were barbarous nations with their corruption (68).

The citizens were religious and well known for their piety. He says "our ancestors lived with the Gods and under them". This is something I had write many times on Facebook groups on Hekate, as an example of why today cannot be compared with ancient civilizations and grasp an idea of ancient Gods, better than they did. Reading the incidents below you will understand that living with the divine in Antiocheia was something normal.

The first name of the city was Ione, a name derived from the daughter of Inachos. The first temple was for Nemeios Zeus. Then it was renamed Epikarpios Zeus, because of the earth's fertility.

He mentions that Helios, the biggest God according to Persians was seen by king Kambyses of the Persians and he ordered him not to attack the city. He made a temple for Apollon in Antiocheia.

Alexander the Great drank water from a cold source and this reminded him of his mother. He found a temple to Bottiaios Zeus and an acropolis. When Seleukos made a sacrifice of a bull, an eagle appeared and took meat from the farming meat and took it away. Seleukos told his son to follow the eagle and he saw that the eagle left the offering to the altar of Bottiaios Zeus. So, they created a new town around that altar, as this sign was considered an order from Zeus. The city was called Seleukeia Antiocheia, from Seleukos and his father's name Antiochos.

Another incident, again with Seleukos, was when he saw a snake, which was angry and then he attacked him but last second it had a sweet face and it disappeared. It was another sign of Apollon. So, he created a temenos with plants, temples, and trees.

When Ptolemaios arrived in Antiocheia, he wanted to take the statue of Artemis, as he liked it very much. He took the statue and his wife got ill. Artemis appeared in his dream telling him what he should do. The statue was returned. Due to this episode, Artemis was called Eleusinia.

The Gods of Cyprus wanted to inhabit Antiocheia, so when Antiocheia asked the oracle of Delphi, the answer was that the Gods of Cyprus should be re-established in Antiocheia. They sent marble artists to Cyprus to copy the original statues. They made the copies as the originals and the priests in Cyprus couldn't recognize what was old and what was the new statue. So, the artists of Antiocheia took the old statues and carried them to their city. This is what the Gods wanted and that's why they guided the artists to create something not possible.

When the Romans took the Kassios Zeus, he stuck them with thunders and they had to return the statue. It's a similar story to the one with Artemis.

With the mention of the above miraculous incidents, Livanios sums up, "such as the love of our Gods for our city and the wish of the non-local Gods to become our Gods(117)".

Livanios presents the politicians of Antiocheia as virtuous and honest and well-educated. We can expect that a city that was considered the capital of rhetoric art should have great politicians. The parliament consists of aristocrats who were very educated and never used bad language or anger. He writes that the parliament is the root of the city. They also gave too much money to support the city and the citizens. Unlike what was happening in other cities, the rich citizens compete on who is going to spend more money for the city (137). He also mentions that older people encourage younger ones to fly like eagles (145).

Each one has a family and kids and his home is well equipped, so everyone in the city doesn't feel lonely and they live in peace.

People continued to come to live in Antiocheia for three reasons: for having a good time in luxury, for gaining knowledge, and for escaping poverty. The citizens of Antiocheia used to welcome the new travelers like they were part of their family. So, unlike Rome, Antiocheia never banished the non-locals who were living there.

I am going to end this article with a question of Livanios, "who will come to see this city and he won't think that he came to a festival?".

Notice how ancient Hellenes respected God's will and they didn't have the idea to doubt it. On the contrary, in our days, people who claim to be priestesses of Hekate, use the name of the Goddess to sell whatever they want, as Her idea. For example, in a known group, the leader wanted to change the politics and she presented that Hekate told her to do it. So, she made priestesses her friends. We live in a world of buy and sale and everything is for sale. Be aware of these wolves. Things that were unlike to happen in ancient times, happen today like being normal. It's corruption.