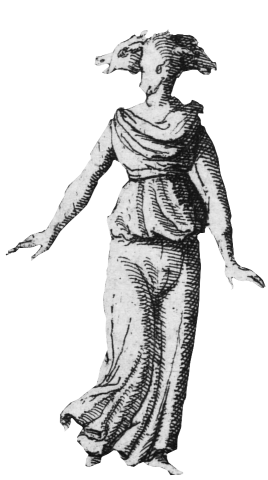 It is believed that the natural phenomena were worshiped in the very ancient prehistoric world. This phenomeno is called animism. After that period, humans have worshiped the animals escpesially the big ones. As we notice, our first ancestors were afraid of strength that was dangerous for them and that they didn't understood. After that period and with the progress of agriculture people used the woods as means to grow plants and domestic animals, so they started to see the Gods and they noticed that they had human bodies.

In ancient Egypt the Gods had the human body and the head of the animals. In ancient Hellas the Olympian Gods and Goddesses had human forms and sometimes animal parts. This was an anamnesis of the old way of worship. Hera had the eyes of a bull, Athena had the eyes of an owl.

In Argonautica of Orpheus, in a necromantic ceremony, a woman with an iron body, called Pandora is showing in the flames and Hekate, the daughter of Tartarus. She had three heads (trissokarenos). In the right the head was from a small female wild dog, in the center the head was from a wild snake and in the left side a horse head appeared. She looked terrible like a monster. She was holding two swords in her hands. After them, the Poines appeared, the Goddesses of punishment.

Limited by this way of thinking, we can see that Hekate has been appeared too with animal forms. She has the eyes of the bull. But we can see her bull-headed, horse-headed, dog-headed, serpent-headed and goat-headed. John Lydus in 6th century a.C. writes for the animal formed Hekate ("the firebreathing head of horse ... the head of a bull, which snorts, the head of hydra as being of sharp and unstable nature ...of a dog as having a punishing nature"), as well as Nonnos, Greek Magical Papyri, Chaldean Oracles and other fragments from ancient papyroi. It is normal to see Hekate connected with animals because she is a Triple Goddess.

In the medieval occult book "Hieroglyphica, sive, De sacris Aegyptiorvm aliarvmqve gentivm literis commentari" published in 1575, Hekate is depicted with a head of a sheep, a woman and a horse. Hekate is also clearly associated with pharmakeia.

Nowadays Hekate appears to her followers and with the described animal forms.